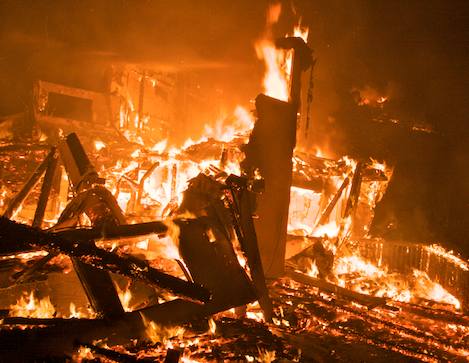 For the second time since we left Santa Barbara, our home for the previous ten years, fire is threatening the community. The last fire, in July, threatened the area to the west of our former home -- in Goleta. Now what is known as the Tea Fire is threatening Montecito and the east side of the community. My wife's school, where she taught for nearly a decade is in the evacuation zone. Apparently 100 homes, many of them mansions have been destroyed. At least two buildings were destroyed when fire ripped through Westmont College.

Our prayers go out to our friends and all of those caught in this fire storm. I know what Santa Ana winds can do, how they can whip up a small fire and turn it into a maelstrom. No matter where you're living, you will be effected by smoke and ash.

So, once again, our thoughts and prayers go out to the people of this region.
Fires Santa Barbara Tea Fire