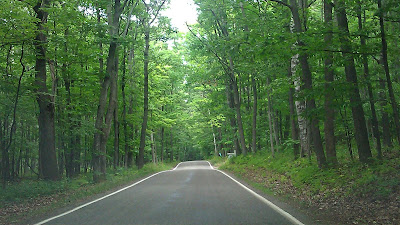 In the course of a month I stood with the families of two church members of long standing.  Both had reached the venerable of 90 or more.  Both had loved God and the church.  You could say that both lived long and they had prospered (to draw from a favorite "philosopher" of mine).  They had lived long and well, but it remains difficult to say goodbye.  As the pastor of a church with a number of older members, I know that over the course of time, I will stand with other families as they and we bid farewell to ones whom we have loved and who have meant much to our lives.  My own mother turns 82 in a few days, and I myself have moved past the middle mark of my life (I would assume).

There is a coinciding of these funerals, the text I've chosen to preach from on Sunday (2 Corinthians 4:13-5:1), and the Time Magazine cover story written by columnist Joe Klein.  Entitled "The Long Goodbye" Klein writes with grace and wisdom of the final days of his parent's lives, the ways in which he dealt with doctors, hospitals, and having to make difficult decisions.  The Supreme Court will decide soon on the "Affordable Health Care Act," an act of Congress that has its fans and its foes, but was designed (even if imperfectly) to deal with both the cost of health care and our ability to extend it to as wide a group of individuals as possible.  The debate over this health care reform has raised many issues, including the reality of death.  When it was proposed that Medicare provide support for discussing end of life care, the specter of "death panels" was raised.  We've heard much about rationing of health care, though whether or not government gets involved, health care gets rationed.  If you can afford it, you can get whatever you need, but for a majority of people, someone -- probably an insurance company rep, will make the decision.  Klein goes into great detail as to his experiences, how he dealt with hospitals and nursing homes, and the way in which health care is provided.

As he closed his article, he recounted his father's final moments of life.

And so it went:  Dad seemed to sight at the end.  He inhaled and sighed and was gone.  He was not a religious man, but there was a gorgeous serenity in his moment -- there was a certain satisfaction for me too, surrounded by caregivers who had helped me through this passage toward my own maturity, caregivers who really knew how to give care.

He found this help from a health care provider that was outcomes based rather than fee based.  Care was provided by staff on salary rather than from fees.  They were more focused on providing appropriate care than achieving profit.

As I read the article, I reflected on my conversations over the years with congregants and with families, as well as thinking about myself and my family.  As we age, the question we face isn't simply one of how we live, but how shall we die?  Will we do so faithfully, entrusting our lives to God, letting go of fears.  There's no need to rush things, but no need to delay unnecessarily that transition from the old life to the new life.

What sticks out here, for me, is this reminder that even though our bodies may break down, the person who we are internally can continually be renewed.  Physical death may be inevitable, but our spirits needn't die.  The body may get frail with time, but we can continue growing in maturity, moving toward that which is eternal.  This isn't the idea of a heavenly sunshine, but rather a sense of hope that sustains and empowers so that we might live faithfully and die with the same sense of faithfulness, living and dying without fear.
Email Post
Labels: 2 Corinthians Common English Bible Death faith Funerals health care hope Joe Klein Maturity Resurrection Spirituality Time Magazine

John said…
What does it mean to face death faithfulully? I have to believe that there is no single, one-size-fits-all answer to this question. At the very least i am certain that the answer is different for those who are in the throes of death and for those who look on from the sidelines whether as intimates or strangers.

I think the answer may be conditioned on whether one lived a life well, within one's potential, as well as how we embrace our successes and failures. I know that the answer is affected by how one treated others, not just those whom we loved but those who threatened us. In the end I think the contours of "faithfully facing death" will be very different depending on where we are in the progression of our relationship with God, and where we have been along the way.

The deaths of Jean and Bob at Central Woodward were of two people who lived vibrant, self-possessed, self-actualized, engaged, lives. These were not timid or quiet people, they did not just muddle through; they never settled for what was, but were always prepared to challenge what they deemed inadequate or unworthy. One may not always have agreed with them, but they always invited admiration for their integrity and their courage. And they did live long and they did flourish, and they did overcome. And they were faith-filled people, with doubts for sure, but whose doubts were merely new challenges to be faced. I am confident that as they passed they had few regrets. I sense that as their eyes opened on the other side they surged forward, in anticipation of the new challenges awaiting them. Their approach to death was all about their approach to life.

But let's admit it, they were unusual people, for many death comes differently. And their faith will serve them differently.

Xander Lawson said…
This comment has been removed by the author.
9:57 PM

Xander Lawson said…
We just have to accept the fact that death is one thing we can't avoid. All we can do is live as best we can and get ready for the inevitable. Many even go to the point of taking out a comprehensive life plan from companies like philippine prudential just so their families will have something left to go on.
9:58 PM