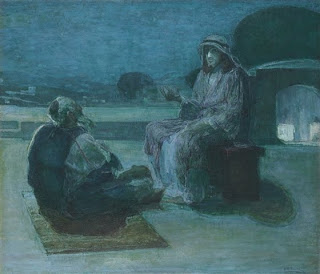 It’s easy to get lost in the darkness of night.  It’s hard to get your bearings when familiar landmarks disappear into the background.  You think you know where you’re going and end up somewhere else.  It happens to me with some regularity.

I remember one evening, back when I was in college, I ended up driving my car into a field.  I was, at the moment, on a date, and after my date’s futile attempt to help me stay up on roller skates, we decided to take a drive out to Bonanza, a very small farming town east of Klamath Falls.  Now,  I really didn’t intend to end up in that field, but under the cover of darkness, I didn’t know where I was going.   And no, nothing happened!  I was a perfect gentleman, or better – I was rather shy!

Nicodemus didn’t end up driving into a field, but you could say that in a spiritual way, he got lost in the night.  According to John, Nicodemus, a religious leader and teacher, visited Jesus under the cover of darkness.  He may have wanted to avoid being seen by colleagues, but in John’s gospel there is always a deeper meaning to the words and actions of those present in the story.   Therefore, the image of the night speaks of his spiritual confusion and his misunderstandings of the nature and the purpose of God.

As we hear this story, we do so on Trinity Sunday.  Trinity Sunday is one of six major festivals in the church year, and though Disciples are a non-creedal people and don’t necessarily emphasize this description of God’s nature, it does offer even Disciples an opportunity to reflect on the ways we understand God.

The story before us suggests that Nicodemus is confused about who God is.  I think it’s safe to say that Nicodemus isn’t alone in this.  Many Christians also find the traditional description of God to be not only confusing but even downright bewildering.  How can God be one and yet three?  Our attempts to answer this question can leave us with three different Gods or as unitarians, but certainly having no clear understanding of the Trinity.   I’m not going to try to sort all of this out this morning, but perhaps we can reflect on the way in which we envision God and the ways in which God sees the world.

Nicodemus comes to Jesus and says – we know that you are a teacher who comes from God – how else could you do all these signs?  But as soon as Jesus starts to talk with him about the things of God, we see that Nicodemus doesn’t really understand how God is present in and through Jesus.   He thinks he knows how God works, but Nicodemus ends up trying to put God in a box that can’t make sense of Jesus and his message.
Nicodemus has a very narrow view of how God works.  He’s a literalist.  So, when Jesus tells him that if he wants to see the kingdom of God, then he must be born anew, this doesn’t make sense.  How can a grown man climb back into his mother’s womb and then be reborn?  How indeed?  Of course, Jesus isn’t thinking along these lines.

Jesus tells Nicodemus that we have to be born of water and the Spirit.  We can take this statement in a number of directions, but I would suggest that Jesus is speaking of physical birth and spiritual birth.  Nicodemus gets stuck on the physical – how can I return to my mother’s womb so I can be reborn?  But Jesus wants him - and us – to understand that if we’re born again or born from above, then we can see things differently.  That is, we can see things with spiritual eyes.  When that happens we begin to change the way we live in this world.  But, that means getting above the forest so you can see the trees.

When we were living in Santa Barbara, I enjoyed spending time at an Episcopal monastery that sat up in the hills behind the city.   The view was amazing.  You could see the entire coastline for miles on end, but you could also look down on the city and appreciate all the bustle going on below.  It was a different kind of view than the one at the bottom of the hill, which was limited by trees and buildings.
If being born from above means seeing the world as God sees it, how does God see the world?

John gives us a couple of clues, which Nicodemus struggles to understand, largely because he doesn’t seem to understand who God is.  He doesn’t understand the freedom of God or the love of God.

Here in the Gospel of John, Jesus tells Nicodemus that the Spirit of God, blows wherever it wishes.  As much as I love the hymn, A Mighty Fortress Is Our God, that image may be too static.  According to John, the Spirit is dynamic and not like an immovable rock.  The Spirit can’t be boxed in, for God must be free.

Nicodemus also struggles to understand the breadth of God’s love, a love that is expressed through the giving of the Son as a sign of God’s love for the Kosmos.   This love is expressed so fully in words found in of one of the most beloved passages of Scripture:

God so loved the world that he gave his only Son, so that everyone who believes in him won’t perish but will have eternal life.  (Jn. 3:16 CEB).

The question we must ask is this – what is the nature of this world that God loves to send his only Son to reveal the love of God for this world?  Well, as David Lose reminds us, in John’s gospel this “World,” or the Kosmos, is almost always hostile to God.  This means that God is sending his beloved Son to reconcile and reclaim a world that is hostile to God.  John says here that when we entrust our lives to this Son, then we experience eternal life – that is, life fully present with God.  Yes, God loves the world and seeks to save it.  The purpose of God isn’t judgment but reconciliation, so that the world might reflect the Glory of God.
Like Nicodemus, many of us find our selves walking in darkness, stumbling around, unable to truly understand the nature and purpose of God.  Like him we can’t understand the freedom of God, and so we box God in, but then God becomes small and insignificant.  Our encounters with this God fail to transform our lives.

As we contemplate the wondrous complexity that is the God revealed through the Trinity, we ask the question: In what ways have I been born from above?  In what ways do I see the world that God loves so much? In what ways am I a different person because of my encounter with God?

As the Gospel of John continues, we meet Nicodemus on several occasions, and it would seem that he was changed as a result of this night visit.  It appears that he emerged from the darkness of night into the light of day, even as he was born from above.

In Isaiah 6, a passage that celebrates the full glory of God, the prophet finds himself overwhelmed by his encounter with God.  He cries out – woe is me, I am a man of unclean lips who lives among people of unclean lips, but as he does so, one of the creatures that serves the Lord of Glory takes a coal and places it on his lips, cleansing him.  So, when the Lord asks – who will go and share my message?  Isaiah answers – Here I am, send me!

In a book entitled  How the Church Fails Businesspeople (And What Can Be Done About It),John Knapp suggests that the church has failed to help businesspeople make a connection between their faith and their vocations.  We do a much better job of lifting up religious professions and volunteer ministry through the church, but don’t do a very good job of helping businesspeople see how God is present with them in their daily work as businesspeople.  This can have a devastating effect on the way Christians go about their jobs.  Many Christians have been left with the belief that, Christian ethics play no part in the business world, that justice and love are irrelevant.  In response, Knapp calls on Christians to look to Micah 6:8 as a good moral or ethical guide for how we should live and work in a world that God loves enough to send his only Son.  So:

“What does God require of you, but to do justice, and to love kindness, and walk humbly with your God?”