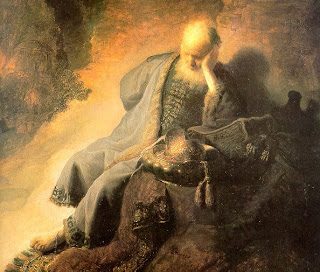 As I prepare to participate in the Streaming Conference at Rochester College, which features Walter Brueggemann, I am engaging with his book The Practice of Prophetic Imagination: Preaching an Emancipating Word.

In this post I wrestle with preaching in the context of two contrasting narratives.

There is a calling given to preachers to join in the work of prophetic preaching, to make known the vision of God for the world.  Prophetic preaching is not easy to engage in because the culture in which we live, including the religious culture is less than hospitable to receiving this word from God, a word that is represented for us by the prophets of ancient Israel.   Truth-telling isn't well received.  Prophetic preaching is, according to Walter Brueggemann, "is an attempt to imagine the world as though YHWH—the creator of the world, the deliverer of Israel, the Father of our Lord Jesus Christ whom we Christians come to name as Father, Son, and Spirit—were a real character and an effective agent in the world"   [The Practice of Prophetic Imagination: Preaching an Emancipating Word,  Fortress Press, p. 2 Kindle Edition]

And where do we see the contest between narratives being played out in our contemporary situation?  Brueggemann writes:

The present form of that contestation, I propose, is the felt and often denied tension between the gospel narrative that specializes in social transformation, justice, and compassion and the dominant narrative of our culture that I have elsewhere termed “military consumerism.” The contestation that is constituted by prophetic preaching is in our own time, as always, profoundly difficult because the dominant narrative, the one contradicted by the narrative of YHWH, is seldom recognized as a social construction and is almost never lined out in its full clarity and claim. The contestation, moreover, is difficult because the YHWH narrative is rarely recognized as a genuine alternative to the dominant narrative and is more often reckoned as a footnote or a pin prick to the dominant narrative but not a real alternative. In our time and circumstance, the narrative of US military consumerism and the YHWH narrative of social transformation, justice, and compassion are deeply intertwined and there is great resistance to sorting them out.
[Brueggemann, Walter (2011-12-15). The Practice of Prophetic Imagination: Preaching an Emancipating Word (pp. 3-4). Augsburg Fortress. Kindle Edition.]

If this is the contest, you can see how, in the United States, it is difficult to bring a word from the prophets to the contemporary church, which is so deeply wedded to this dominant narrative of "military consumerism."

How then do we bring a word that will enable YHWH's narrative to shed light on the darkness of the dominant narrative without ending up simply being a nag pushing social action without truly getting to the root issues, which is trust in YHWH?
Biblical Narrative Consumerism Imagination Prophetic Preaching Streaming Conference Truth Telling Walter Brueggemann

Jeff said…
And thus, even as brash a speaker as Mark Twain did not allow his "War Prayer" to be published while he lived.
6:11 PM