Beware the Specter of American Exceptionalism 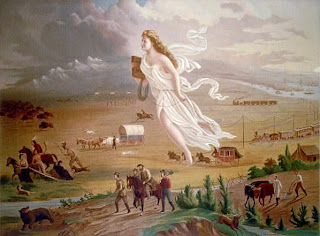 We’re in the eye of a political storm, sitting in that moment between two political conventions.  The Republicans have had their turn to nominate and hail their candidates.  Next week the Democrats will gather to renominate the President.  One theme you’re undoubtedly to hear in both conventions is the extolling of American Exceptionalism.   You have heard and will hear the United States described not only as a unique nation, which it is, but the greatest nation that has ever existed.  You’ll hear calls for God to bless the nation in tones that invoke the idea of chosenness.  There has long been a theme in this country that we are the new Israel, the Chosen People, whom God loves more than any other.

Now I’m proud to be an American.  During the Olympics I root for the American athletes.  I don’t have any desire to live any place else in the world.  We have a lot to offer the world.  We’re a gathering place of the world’s peoples, and this mixture of cultures and ethnicities has enriched the nation.  We also enjoy tremendous freedoms, including a freedom to worship and to speak our mind as we wish that has been a model for others.   But there’s a danger in thinking of ourselves as an exceptional nation.

We need to ask a question of ourselves:  What makes us think of ourselves as an exceptional nation?  Why do we think that we are a chosen people?  Back in the 1970s, when I was coming of age, there was a popular appeal to a biblical text – “If my people, who are called by my name humble themselves, pray, seek my face, and turn from their wicked ways, then I will hear from heaven and will forgive their sin and heal their land!” (2 Chronicles 7:14 NRSV).  Now, I don’t have anything against humility or prayer or turning away from wickedness, but who said that we are as a nation the equivalent of Israel?  Who said we are a covenant nation?  Where in the biblical story does God explicitly say that America is God’s people?  How did the covenant promises God is said to have made with Israel get transferred to this nation?

Greg Garrett, in his book Faithful Citizenship, speaks to this question of exceptionalism and the tendency to draw upon this covenant language to define the American reality.  Of this sense of blessing that we claim for ourselves, he writes:

But ultimately, the question is, Has God blessed us in these ways because God has chosen us? Or has God blessed America because God is a God of blessing, and thus beauty, truth, and wisdom all flow from God unceasingly, and America has been, as with many nations, a beneficiary of that largesse?  [Greg Garrett. Faithful Citizenship: Christianity andPolitics for the 21st Century (Kindle Locations 1852-1854). Patheos Press. Kindle Edition.]

Are we blessed, by all means – but are we blessed because of our exceptionalism or because God is a God of blessing?  And if the latter, as Garrett states, then we share in blessings God pours out on the many.

My concern with exceptionalism is that it can lead to arrogance and unwise imperialistic ventures.  It can lead us as a nation to impose our will and our values on others – and in the 20th and 21st centuries we have had the military capability to do so – though with less than astounding success.  Remember the American expansion across the continent that almost annihilated Native Americans from the land.  At the turn of the twentieth century, we joined the European powers in extending our power across the globe – establishing colonies of our own in Puerto Rico, Guam, and the Philippines, to name a few places. We have embraced the idea that we as a nation are God’s chosen vehicles to spread American values, and we ended up entering an ill-advised war (Iraq) that continues to haunt us.

I will admit that there is a unique quality about the American system, but we as a people aren’t exceptional.  We are all human beings who have hopes and dreams, some of which are fulfilled and others that aren’t.  We share the same DNA as people living in Africa, South America, Europe, and Asia.  In fact, we all share a common ancestor (whether you believe in a literal Adam and Eve or evolution, both posit a common ancestor).  What is unique perhaps is the diversity of our people.  That doesn’t make us exceptional.  It doesn’t call forth a special blessing from God.  But it does suggest that if we’re willing to affirm this diversity that is present in our country, we will be enriched.

There is a hymn that I like to sing on national holidays.  It’s a reminder that God is the God of all the nations:

This is my song, O God of all the nations, a song of peace for lands a far and mine.
This is my home, the country where my heart is;
Here are my hopes, my dreams, my holy shrine;
But other hearts in other lands are beating with hopes and dreams as true and high as mine.

My country’s skies are bluer than the ocean, and sunlight beams on cloverleaf and pine;
But other lands have sunlight too, and clover, and skies are everywhere as blue as mine.
O hear my song, thou God of all the nations,
A song of peace for their land and for mine (Lloyd Stone, 1934 – tune: Finlandia)

May we honor the nation that is our home, but let us not think of ourselves higher than we should.  Let us remember that God, is the God of all the nations.  Remember that God is the Creator and the Redeemer of us all – not just Americans, but the whole of creation. So beware of the specter of American Exceptionalism.
Email Post
Labels: American Exceptionalism Chosenness Common Good Democrats and Republicans Greg Garrett Imperialism Manifest Destiny New Israel politics Religion

John said…
To those to whom much is given, much is expected. Why would any nation choose to become the successor to the Nation of Israel? Look at what God has allowed to befall them in age after age.

Perhaps it is better to just be satisfied with being a child of God and serving under the radar as it were.
11:33 AM

Robert Cornwall said…
Thanks Ed for the heads up. Yes, Barton's interpretation of history is distortive!! And thus, the vision of exceptionalism is also.

edwin dearborn said…
I believe that you can extol Exceptionalism as a moral high ground point, devoid of political connotations. Why marganilize the word to just America, like we have done with other issues? I believe we should promote Exceptionalism in terms of human values that embrace the moral and ethical principals for all people. The word now is a hot button and has been pigeon holed as to mean looking down on others.. In reality, one can be exceptional and still hold others in that view as well.
6:44 AM

I think you're on to something here. You know, I grew up in Northern California and Oregon in the shadow of the Cascades -- especially Mount Shasta and Crater Lake. In my mind, these are exceptional places. But others see the places they've lived in as also being exceptional. Exceptional is in the eye of the beholder -- it would seem!