The Teams Are Set -- Let the Political Games Begin 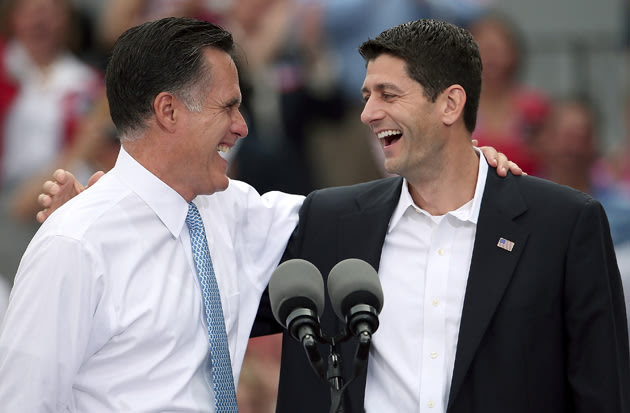 This morning Mitt Romney, former one-term governor of Massachusetts introduced us to his running mate, Rep. Paul Ryan of Wisconsin.  Romney-Ryan will  go head to head with the incumbents Obama-Biden in November.  Now that all the VP suspense has been relieved, we can now have a fuller conversation about the visions of these two teams.

Let me say this -- although I'm not a fan of the political philosophy of Romney-Ryan, I don't think their evil men.  I do believe, however, that the policies that they would enact would be problematic.  To this point Mitt Romney has been rather vague about what he would do beyond creating jobs by cutting taxes and regulations.  He says he'll draw down the deficit without raising taxes, while raising defense spending.  I'm not sure how you do that, but both Romney and Paul Ryan believe they can do this.  Likely, they will balance the budget on the backs of the poorest Americans.  Many Christian and Interfaith groups are very concerned about what a Romney-Ryan budget do to the safety net.  They say they would preserve it, but cutting away at things like food stamps, Head Start, etc. would be devastating. Let me share just this statement from Sharon Watkins, General Minister of my denomination, the Christian Church (Disciples of Christ):

When Jesus said, “Love your neighbor as yourself,” he didn’t just mean exchanging cups of sugar with the family next door. In the story of the Good Samaritan, Jesus showed that being a neighbor means reaching out to anyone, anywhere, in their need. A federal budget that slices away at funds for hungry children and their families, that abandons senior citizens, that reduces life-sustaining foreign aid, is a budget that goes against the teachings of Jesus. America can do better! The Good Samaritan saw a need, reached out to meet the need, and then enlisted the aid of others to help. Through a compassionate federal budget, we can do the same – and be a stronger nation for it!

Now, I didn't take in the speeches this morning, except for a brief moment or two, but what I heard Romney say was that he would restore America to greatness, though he's still vague on details.   I did find it interesting that he castigated the President for cutting Medicare funding when the Ryan Budget plan would essentially gut Medicare by turning it into a voucher plan -- though apparently you could choose between the new and existing forms, but not sure how that would work.

President Obama has not run a perfect administration, and even his signature achievement needs considerable tweaking, but to turn to Romney-Ryan would be a return to Bush era actions that got us into this problem.  President Obama has had to deal with the deepest financial collapse since the 1930s.  We're adding jobs, but not fast enough.  And here's another point -- many of the jobs lost will never come back.  Companies have discovered they can do just fine with fewer employees, though there  are signs that productivity is slowing down.

Although economics will take center-stage in the coming months -- we're in a rather slow recovery, though if housing starts continue to jump that may change -- there's something else we need to keep in mind.  How we live in the world.  If Mitt Romney's foray to Europe and Israel doesn't cause you to sit up and take notice, then maybe you need to take another look.  He embarrassed himself in England to such an extent that the Brits have named him Mitt the Twit.  He then goes to Israel and makes embarrassing and potentially racist remarks about Palestinians, making it clear that he has no intention of being a fair broker in the Israeli-Palestinian conflict, which as most Middle East observers will tell you continues to stir the pot.  In other words, he didn't make any friends in the Arab and Muslim world.  Finally, though he seems to have had a nice visit with Lech Walesa, reports are that current Solidarity leaders are less than enthralled with Mitt.  Take this and add it to the Neo-Con saber-rattling toward Iran, and you have a problem at hand.  Neither Romney nor Ryan have any real experience with foreign affairs.  They seem to embrace a big stick policy without any real understanding of diplomacy (the Ryan Budget cuts the State Department budget).

So, come November we have a choice.  I think it's a pretty stark one.  I think I'll stick with the incumbents!
Email Post