Where Else Would We Go? -- A Sermon 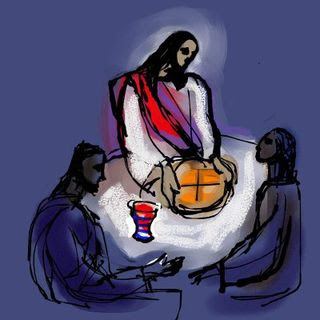 
Has a preacher ever said something that offended you so much that you never went back to that church?  I hope that none of you will take offense at what I say today, or if you do, I hope you’ll come back next week!

And what about Jesus, is there anything that he said that offends you?

I’d be surprised if you said no.  After all, Jesus did have a tendency to say things that got him into trouble.  Remember how his sermon back at his hometown synagogue went?  He was just coming off being baptized by John and had begun to gain a following.  But as they say – you can’t always go home.

On that evening, after Jesus read the text from Isaiah, he began to preach and before too long, the people were getting restless and just a bit angry with what he had to say.  So, instead of celebrating a triumphant homecoming, the hometown crowd tried to throw him a cliff.  Fortunately, Jesus escaped this fate and headed off to a friendlier venue (Luke 4:16-30). Of course, in the end, the religious and the political leaders got together and had him crucified.  It seems that Jesus just had a way with people, doesn’t it?

Now, we’re okay with Jesus. He’s our guy.  He looks like us – sort of – except perhaps that long hair.  Besides, he agrees with us on the important issues of the day.  We would never treat Jesus that way, after all, we’re Disciples of Christ.  But, are we really ready to hear and follow Jesus?

When Joshua gathered the tribes of Israel together after they took possession of the “promised land,” he asked them:  So, who are you going to serve?  Or, as Bob Dylan put it in a song from long ago:

You may be an ambassador to England or France
You may like to gamble, you might like to dance
You may be the heavyweight champion of the world
You may be a socialite with a long string of pearls


Yes, who are you gonna serve?

Joshua gives his answer: “As for me and my house, we’ll serve the LORD.”  And the people answer back: well, we’ll also serve the LORD.  And then the question goes to you and to me – Who will you serve?

When someone walks the aisle and joins the church, we ask them to make the Good Confession – just like Peter did in Matthew 16 -- “Do you believe that Jesus is the Christ, the Son of the Living God?”  And the expected answer is “I Do.”  Now, since Disciples don’t have creeds, we don’t ask new members to define their terms.  There are some in our midst who believe that Jesus is the divine Son of God, the second member of the Trinity.  There are others who aren’t so sure about this confession and who’re more comfortable seeing Jesus as a prophet of God. But wherever you stand on this continuum, the church asks us to give our allegiance to Jesus -- even if we still have questions!

In this morning’s reading from John 6, we hear Jesus say: “Whoever eats my flesh and drinks my blood remains in me and I in them.”  These words are the culmination of a conversation Jesus had been having with would-be followers about whether he would provide them bread – like Moses provided the people of Israel with bread as they wandered in the Sinai.  They were hoping he would provide them with “bread from heaven,” but instead, Jesus offers himself as the “bread from heaven,” and if you eat this bread – unlike the manna – you’ll live forever.

You can see why people might be offended by this.  It sure sounds like Jesus is talking about cannibalism, and most of us, like those who heard these words, aren’t into such things.

Now Jesus makes it clear that he’s talking about spiritual things not physical things, so you can breathe a little easier.  It’s just a metaphor, but these are still rather strong words that invite us to decide who we’re going to serve.

Many believe that John 6 offers us John’s theology of the Eucharist.  These words, especially the opening words of today’s passage, serve as John’s version of the Words of Institution:  “This is my body broken for you.”  “This is my blood shed for you.”  In these accounts of the Last Supper, Jesus calls on the disciples to break bread and share the cup in remembrance of him, but John seems to go further than this.  Even if we take this words metaphorically, John wants us to think about how we’re connected to Jesus. By eating his flesh and drinking his blood, we participate in his life.  We become one with him.

Now, Jesus’ words appear to be too much for the majority of his followers and they walk away.  When the Twelve stay behind, Jesus asks them: Are you going to leave as well?

Peter steps forward, and as he often does, answers for the others:

Peter says to Jesus, since you have the words of life, where else can we go?  So, we’re going to trust our lives to you because you’re God’s holy one.

As you think about Peter’s response, remember how John begins his gospel? Remember how he declares that  “In the beginning was the Word, and the Word was with God, and the Word was God?”  And remember, how in verse 14, John writes: “And the Word became flesh and lived among us, and we have seen his glory, the glory as of a father’s only son, full of grace and truth?” (John 1:14 NRSV).  In John’s mind, not only does Jesus give us words of life, he is the Word who is life.  So, Peter’s right, isn’t he, where else can we go if we want to find the Word that brings us life?

Jesus’ words are often difficult to hear, and yet they speak life to us. We may not like hearing Jesus tell a young man to sell everything and follow him if that young man wants to have eternal life.  St. Francis read these words, and took them quite literally, but obviously, very few others have done this.  And what about the time he told a would-be follower not to wait until his father died to join the group, but instead to let the “dead bury the dead.” Jesus said a lot of things that can make us feel uncomfortable – at the very least.  And yet we stay – why?

Perhaps we’ve found a way of making his words more palatable.  Although Jesus, like most prophets,  comforted the afflicted and afflicted the comfortable, we’ve become quite adept at making ourselves feel rather comfortable.  After all, Robert Schuller taught us that sin is nothing more than poor self-esteem.

But Peter seems to understand what St. Augustine seems to have understood:  “Our hearts are restless until they find their rest in you.”  Augustine had a restless heart, but he found peace in Jesus.  So, is your heart restless?

As you contemplate that question consider these words from the Eucharistic liturgy of my Episcopal youth.  With John 6 as the foundation, the priest would say to us: “Feed on him in your hearts with thanksgiving.”  Isn’t this what Jesus is inviting us to do here?  Feed on me and I will enter your life.  I will penetrate your very being.  And then, as Jesus does this, we can answer the question: Who are you going to serve?

Or as Bob Dylan put it: