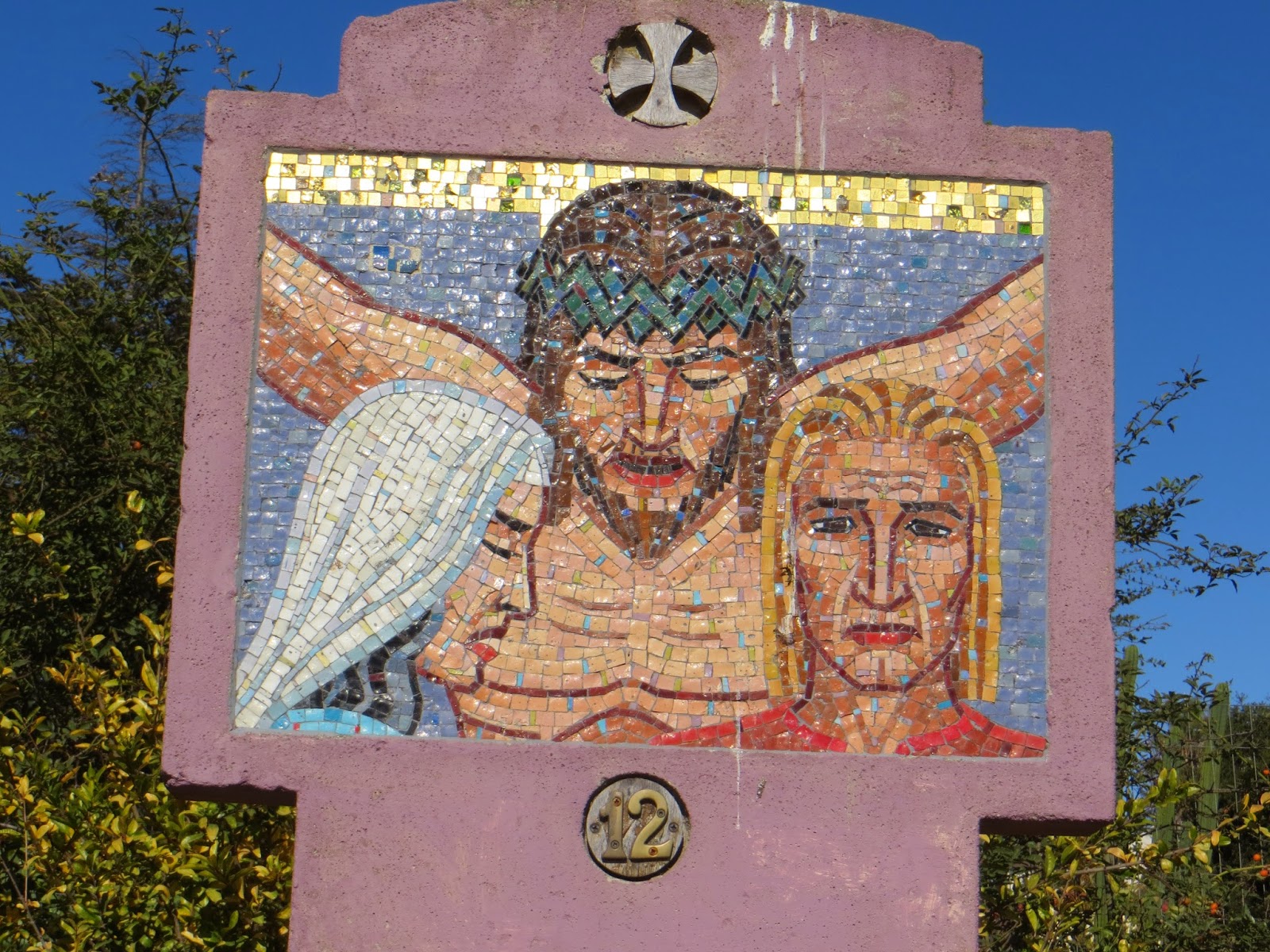 11 Now Jesus stood before the governor; and the governor asked him, “Are you the King of the Jews?” Jesus said, “You say so.” 12 But when he was accused by the chief priests and elders, he did not answer. 13 Then Pilate said to him, “Do you not hear how many accusations they make against you?” 14 But he gave him no answer, not even to a single charge, so that the governor was greatly amazed.

15 Now at the festival the governor was accustomed to release a prisoner for the crowd, anyone whom they wanted. 16 At that time they had a notorious prisoner, called Jesus Barabbas. 17 So after they had gathered, Pilate said to them, “Whom do you want me to release for you, Jesus Barabbas or Jesus who is called the Messiah?” 18 For he realized that it was out of jealousy that they had handed him over. 19 While he was sitting on the judgment seat, his wife sent word to him, “Have nothing to do with that innocent man, for today I have suffered a great deal because of a dream about him.” 20 Now the chief priests and the elders persuaded the crowds to ask for Barabbas and to have Jesus killed. 21 The governor again said to them, “Which of the two do you want me to release for you?” And they said, “Barabbas.” 22 Pilate said to them, “Then what should I do with Jesus who is called the Messiah?” All of them said, “Let him be crucified!” 23 Then he asked, “Why, what evil has he done?” But they shouted all the more, “Let him be crucified!”

24 So when Pilate saw that he could do nothing, but rather that a riot was beginning, he took some water and washed his hands before the crowd, saying, “I am innocent of this man’s blood; see to it yourselves.” 25 Then the people as a whole answered, “His blood be on us and on our children!” 26 So he released Barabbas for them; and after flogging Jesus, he handed him over to be crucified.  (Continue reading at Bible Gateway).

On the Sunday prior to Easter the lectionary offers the preacher two choices:  Do you highlight the Triumphal Entry (Palm Sunday) or the cross (Passion Sunday).  The former is more joyous, but the latter is more realistic.  If you choose the Passion Narrative, where do you start and stop?  For this meditation, I’m choosing to focus on the movement from the trial before Pilate to the confession of the centurion.

The reading from Matthew 27 raises a number of questions about the characters in the story.  Why, for instance, is Pilate reticent to pass judgment on Jesus?  After all, he was known to be a rather cruel taskmaster.  Then there’s his wife, who has a dream warning Pilate to stay clear of Jesus due to his innocence.  Why is she a witness in this case?  Then there is the apparent blood thirstiness of Jesus’ Jewish opponents.  Of course, there’s also the contrast between the obviously guilty Barabbas (though we’re not told what he is charged with).

As we ponder this text we must deal with the crowd’s reaction with great caution.  The call to crucify and the acceptance of his blood being upon them – that is they take responsibility for his death – has been fuel for many a fire down through the ages.  Why is it that Matthew includes this, even as he records Pilate washing his hands of the same blood?  Why is Matthew absolving Pilate of guilt in this matter – and with him the Roman government?  Whatever Matthew’s reasons for telling the story in this manner, the phrase “his blood be on us and on our children” has led to the most horrific and even demonic actions towards Jews on the part of Christians down through the ages.   For this we as Christians must repent of our complicity.

One of the questions raised by the text concerns the reason why Jesus is on trial.  What crimes has he committed?  To the Romans anyone pretending to royalty (King of the Jews) would be considered a threat.  Rome didn’t like restive populations.  For the Jewish leadership, their temporal authority and power came to them from the Roman government.  The Temple authorities had responsibility for keeping order in Jerusalem.  Rebellion could lead to their loss of power.  As for the crowd – well crowds can be fickle and easily manipulated.  Everyone likes a parade, so it’s no surprise that people got up in the Triumphal Entry.  Now, they get to participate in judgment.  Barabbas or Jesus?  Maybe Barabbas is from Jerusalem – a hometown boy, while Jesus is from up north in Galilee.  Let’s go with the one we know – free him and crucify the other.

With that – Pilate lets the chain of events leading to crucifixion begin.  He has Jesus flogged and then he turns Jesus over to the soldiers, who decide to have a little fun with their prisoner – like a cat with a mouse, they make sport of him.   First they strip him of his clothing – an act of humiliation.  Then they decide to put a scarlet robe on him, along with a crown of thorns for his head and a reed for his hand.  Now he has all the accouterments of royalty.  Here is the “king of the Jews.”  With mocking adoration, they bow before him, laughing all the time.  Yes, if this is truly a king, then he is the king of fools.  Of course there’s another way of looking at this scene.  Could he be the lamb led to slaughter, by whose stripes we are healed? (Isaiah 53:5-7)

Having been humiliated and beaten and mocked, now it was time to take that final journey to Golgotha, the place of execution.  In typical fashion, he would have been tied or nailed to a cross beam, which would be attached to a vertical beam that was set in the ground, elevating his bruised and bleeding body off the ground until such time that he either bled to death or was asphyxiated by the crushing weight of his body on his abdomen and lungs.

The Romans knew how to execute people.  They wanted their victims to suffer and they wanted to the populace to witness this suffering.  They used crucifixion, one of the cruelest forms of execution ever devised, to send a message.  If you’re thinking of rebelling, let this be a lesson to you.  If you don’t succeed, this will be your fate!  So, just sit tight and obey your overlords – after all, Roman rule wasn’t all bad.  They were good at building infrastructure – from roads to aqueducts.  Of course, this infrastructure was designed to benefit the military industrial complex, not the residents of occupied lands.

As we consider the horrific nature of Jesus’ execution, perhaps we might stop to ponder our use of capital punishment.  It might not be as cruel as the Roman methods, but what message does it send.  For those who follow Jesus, the one who dies on a cross, should we be given to the practice of taking life ourselves?  Yes, for whom has Jesus died?

The process of dying on the cross could be lengthy.  In most Jesus movies, Jesus is pictured hanging on a cross high above the crowd, but in reality the cross wouldn’t have been more than six feet off the ground.  He would have been high enough up so as to not be able to rest his feet on the ground, but close enough to be almost face to face with the crowd who had come to gawk and taunt him.  Yes, the process of humiliation that began with the soldiers continues.  So, you think you’re the king of the Jews?  Well then where’s your power?  Why don’t you get yourself off that cross?  Even the ones being crucified with him get in the act (there’s no good thief here asking for his blessing).  The rest of his own group stands well off to the edges of the crowd.  Thus, he is alone with his tormenters.

We can understand why he might cry out as he neared death:  “My God, my God, why have you abandoned me?  Could it be that Jesus was merely saying to himself the words of Psalm 22, words that move from abandonment to hope?  Or was he truly experiencing abandonment – a cry of absence – of feeling alone in the world?   There is no clear answer, so we are left to consider Jesus’ state of being at that moment, taking from it a word for our own lives.

The cry of desperation comes in an apocalyptic moment.  As would be fitting, in Matthews’s portrayal, darkness spreads across the land from noon until three.  And as Jesus cries out once more, after receiving a sponge full of sour wine, he breathes his last breaths.  And at that moment several more apocalyptic signs occur.  The curtain in the temple is torn in two, an earthquake shakes the ground, the tombs open and the saints of God are raised to life and wander around the city, appearing to many.  Those who are observing all of this, become afraid.  But one among them offers a confession of faith.  A centurion declares:  “Truly this man was God’s Son!”  When I read this I cannot help but hear the voice of John Wayne in The Greatest Story Ever Told declaring in Wayne’s distinctive diction:  “Truly this man was the Son of God!”

As we witness the scene on the cross – what is the nature of our confession?
Email Post
Labels: Capital Punishment Crucifixion Gospel of Matthew Lectionary Palm Sunday Passion Sunday Reflections Theology of the Cross