Journey to a Revelatory Meal -- A Lectionary Reflection for Easter 3A 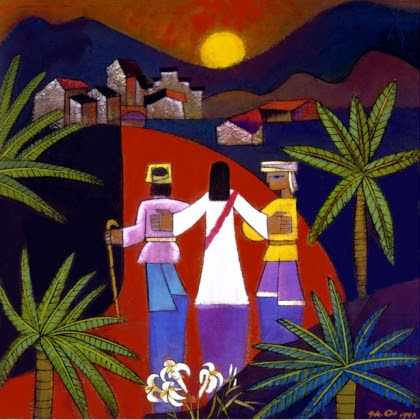 13 Now on that same day two of them were going to a village called Emmaus, about seven miles[a] from Jerusalem,14 and talking with each other about all these things that had happened. 15 While they were talking and discussing, Jesus himself came near and went with them, 16 but their eyes were kept from recognizing him. 17 And he said to them, “What are you discussing with each other while you walk along?” They stood still, looking sad.[b] 18 Then one of them, whose name was Cleopas, answered him, “Are you the only stranger in Jerusalem who does not know the things that have taken place there in these days?” 19 He asked them, “What things?” They replied, “The things about Jesus of Nazareth,[c] who was a prophet mighty in deed and word before God and all the people, 20 and how our chief priests and leaders handed him over to be condemned to death and crucified him. 21 But we had hoped that he was the one to redeem Israel.[d] Yes, and besides all this, it is now the third day since these things took place. 22 Moreover, some women of our group astounded us. They were at the tomb early this morning, 23 and when they did not find his body there, they came back and told us that they had indeed seen a vision of angels who said that he was alive. 24 Some of those who were with us went to the tomb and found it just as the women had said; but they did not see him.” 25 Then he said to them, “Oh, how foolish you are, and how slow of heart to believe all that the prophets have declared!26 Was it not necessary that the Messiah[e] should suffer these things and then enter into his glory?” 27 Then beginning with Moses and all the prophets, he interpreted to them the things about himself in all the scriptures.

28 As they came near the village to which they were going, he walked ahead as if he were going on. 29 But they urged him strongly, saying, “Stay with us, because it is almost evening and the day is now nearly over.” So he went in to stay with them. 30 When he was at the table with them, he took bread, blessed and broke it, and gave it to them. 31 Then their eyes were opened, and they recognized him; and he vanished from their sight. 32 They said to each other, “Were not our hearts burning within us[f] while he was talking to us on the road, while he was opening the scriptures to us?”33 That same hour they got up and returned to Jerusalem; and they found the eleven and their companions gathered together. 34 They were saying, “The Lord has risen indeed, and he has appeared to Simon!” 35 Then they told what had happened on the road, and how he had been made known to them in the breaking of the bread.

It is the third Sunday that we consider the appearances of Jesus.  Easter isn’t just a one and off event.  Jesus takes every opportunity to make himself known to his followers, empowering them to share their testimony to the glory and power of God who raised Jesus from the dead.  Each of the Gospels has their own set of stories.  There are differences and there are overlaps.  One of the most memorable of stories is the appearance to the two disciples making their way to Emmaus.  Luke gives us one name, which appears nowhere else, so one would assume that the recipient has some knowledge of Cleopas.  As for the other disciple – we’re not told who that person is.  Whoever these two are, they know Jesus, have heard all kinds of stories, but they’re heading away from Jerusalem.  As to where, Luke tells us they’re heading for Emmaus, wherever that is.  In his new book Jesus:  A Pilgrimage, Fr. James Martin, S.J., tries to find the town, following every lead he could find, and ultimately gives up.  So, maybe the destination doesn’t matter – maybe it’s the journey.

By this time in the story, Jesus has appeared to a group of women and Peter has discovered the Empty Tomb.  Isn’t it extraordinary that Jesus chooses to appear to women, when culturally-speaking their witness wasn’t considered reliable.   Isn’t it like Jesus to turn things on their head?  There are stories, but are they believable.  Maybe they’re just imagining things – yes, they all had a warm fuzzy experience of the memory of Jesus, and now they’re “fired up, and ready to go!”  But Luke, isn’t satisfied with warm fuzzy experiences.  He has some other stories that seem to affirm the message of resurrection.

The Gospels make a number of claims – even if at times made implicitly.  First, the risen Jesus is not a ghost.  He’s not a hallucination either.  He has a physical body (he eats bread and fish), and yet there is something different about this body.  It’s different enough that his disciples have trouble recognizing him, and it can appear and disappear in ways that normal human bodies cannot.

With this in the background we come to the focus of the story – Jesus’ encounter with the two disciples on the road to Emmaus.  I was reminded recently that in Luke-Acts God is portrayed as the one who takes the initiative.  And so it is with this story.  The two disciples aren’t seeking Jesus or seeking after God.  They’re heading away from where Jesus had been spotted.  Maybe they were giving up – resigning from the group, and making their way to a new life?  They thought that Jesus was the way, but apparently not.  And so, like Jonah, they’re heading in the opposite direction!

But Jesus goes looking for them, and he finds them heading down the road toward the mysterious village of Emmaus.  He invites himself to join them on the road.  While the two disciples don’t seem to recognize Jesus, he doesn’t seem to look too dangerous, and so they welcome him to walk with them.  And as they walk on, they have a conversation about the death of Jesus – and the reports of his resurrection, which they find difficult to believe.  Ironically, even though Jesus doesn’t seem to know about the events of Good Friday or Easter, he does know a bit about the biblical teachings on the Messiah, which he understands to point toward him.  And so, moving from the beginning of the Hebrew Bible (or the Septuagint), he interprets the biblical story as pointing to him.  They take in the teaching, but they don’t seem to get it.

Maybe they need something more to clinch the deal.  And the moment comes during a meal.  When they neared the village, Jesus appears to be continuing on beyond the village, but they prevail upon him to stay and share a meal with them.  It’s evening – the day is nearly over – it would be better to stop for the evening.  So Jesus goes in to where they are staying – it could be an inn or it could be the home of one of the two people.  In fact, I’m wondering if this isn’t a married couple who decided to head home after the events of Good Friday.

In any case, they sit down for dinner, and Jesus takes on the role of host.  They had invited him, but he changes roles with them.  And in a manner that mirrors what we saw in the story of the Last Supper.  Jesus takes bread, blesses it, and breaks it, and gives it to them.  And as he does this, Luke records that “their eyes were opened, and they recognized him; and he vanished from their sight” (vs. 31).  This is truly a sacramental moment.  As theologian Molly Marshall puts it:  “Surely Luke 24 offers an emerging Eucharistic theology. The promise of this text is that Jesus will meet his beloved ‘in the breaking of the bread.’”   And rooted in this Eucharistic theology is the importance of hospitality, and thus here we see that “Eucharistic hospitality should emulate the expansive welcome portrayed in this text.” [Feasting on the Word, Year A, Vol. 2:  422].

This is a Eucharistic theology that welcomes the stranger, and where it is possible that the Stranger becomes the host.  That is, as Molly Marshall suggests, a risky move.  It is a reminder also that the Eucharistic experience is a communal one.  We can also see in this passage a liturgical connection between Word and Sacrament.  Jesus first interprets the Word and then is revealed in the Breaking of the Bread.  The two disciples seem to have caught this reality; for they remember how their hearts were warmed as Jesus had taught them.  Now, after the revelation at the Table, his teachings become clear to them.  It is as Cynthia Jarvis puts it:

By word and sacrament, Christ opens the eyes of them who rejoice that they have reached their destination in him.  Christ’s church has been making diligent use of his given means of grace since the evening of the first day of the week, in hopes that, on the way home, perhaps two in the crowd might even say, one to the other, “Did not our hearts burn this morning as the scriptures were opened to us.”  [Feasting on the Word, Year A, Volume 2:  423].

Indeed, may some among us have our hearts opened to God, even as the Scriptures are opened and the bread is broken in our midst.
Email Post
Labels: Easter Emmaus Road Eucharist Gospel of Luke hospitality Lectionary Reflection Resurrection