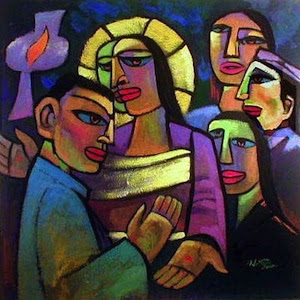 19 When it was evening on that day, the first day of the week, and the doors of the house where the disciples had met were locked for fear of the Jews, Jesus came and stood among them and said, “Peace be with you.” 20 After he said this, he showed them his hands and his side. Then the disciples rejoiced when they saw the Lord. 21 Jesus said to them again, “Peace be with you. As the Father has sent me, so I send you.” 22 When he had said this, he breathed on them and said to them, “Receive the Holy Spirit. 23 If you forgive the sins of any, they are forgiven them; if you retain the sins of any, they are retained.”

24 But Thomas (who was called the Twin[a]), one of the twelve, was not with them when Jesus came. 25 So the other disciples told him, “We have seen the Lord.” But he said to them, “Unless I see the mark of the nails in his hands, and put my finger in the mark of the nails and my hand in his side, I will not believe.”

26 A week later his disciples were again in the house, and Thomas was with them. Although the doors were shut, Jesus came and stood among them and said, “Peace be with you.” 27 Then he said to Thomas, “Put your finger here and see my hands. Reach out your hand and put it in my side. Do not doubt but believe.” 28 Thomas answered him, “My Lord and my God!” 29 Jesus said to him, “Have you believed because you have seen me? Blessed are those who have not seen and yet have come to believe.”

30 Now Jesus did many other signs in the presence of his disciples, which are not written in this book. 31 But these are written so that you may come to believe[b] that Jesus is the Messiah,[c] the Son of God, and that through believing you may have life in his name.

******************
On this the second Sunday of Easter, the story continues of the resurrection continues.  It’s evening now.  Jesus has already appeared to Mary Magdalene, whom he had told he must first ascend to the Father, from whom he had come.  Now it’s time to make an appearance to the rest of the disciples, who we’re told are hiding out due to their fear of the religious authorities (who work for the Roman overseers).  Peter and the beloved disciple had seen the empty tomb, but it’s not clear what they took from that moment.  Perhaps, as Mary first thought, someone had taken the body.

Can we assume that Mary reported her encounter with Jesus?  If so, that doesn’t seem to have been   sufficient.  After all, in that day, a woman could not testify in court.  Her testimony was not considered reliable.  I wish I could say that we’ve gotten completely beyond such beliefs, but unfortunately in some quarters a woman’s voice remains suspect.  They are, we’re told, overly emotional.  Perhaps that is the way that the group felt about her testimony.

Now they can have evidence that will meet their needs.  Jesus shows the disciples his hands and his side – where the wounds of the cross still reside.  When they see these wounds, they rejoice.  They had thought that the cross ended things for them.  There is a certain finality in death, but apparently not in this case.  They were back in business!

It’s at this moment that Jesus gives commissions his disciples to continue the ministry that the Father had committed to him.  So, even as the Father sent Jesus, so Jesus will send them.  And in order to prepare and empower them for this work, Jesus breathes on them the Holy Spirit.  He also empowers them to forgive and retain sins – just as Jesus had been doing.

We will return to this story on Pentecost Sunday, when we will focus in on this act of empowerment and commissioning. But that needs to wait for a few weeks.  The point is – the no longer needed to live in fear, for they were filled with the Spirit of the one who had been resurrected.

Mary was the first person to encounter the risen Christ.  Then the disciples as a whole received a visit.  That is, everyone except for Thomas.  For some reason he had been absent when Jesus appeared that first night of resurrection.  He heard their testimony, but he wasn’t sure he could accept it.  Like many of us, he asked tough questions.  He was an empiricist at heart.  It’s not that he was a perennial doubter.  After all, he had committed his life to following Jesus.  He signed on to the team, and even in the face of Jesus’ death, he remained connected to the community.  He was a believer, but he did have his questions.  He needed more evidence.  He needed to touch Jesus’ hands and his side – not just see with his eyes, but touch with his hands.  Thomas gets a bad rap for his doubts, but we should be glad to have a Thomas in the story.  It’s good to ask questions and simply believe because someone else tells us a story.

While Jesus told Mary that she couldn’t touch him because he hadn’t yet ascended to the Father (John 20:17), Jesus invites Thomas to touch his wounds.  Thus, it appears that Jesus has ascended to the Father.  He has completed his resurrection (how very different from the ascension stories in Luke and in Acts).  John doesn’t have a final ascension.

As for Thomas, who has arrived a week late for the Easter service (the second Sunday of Easter?), when all the lilies have been removed, he needs some reassurance.  And so Jesus offers him the opportunity to see and possibly even touch his wounds.  In response, Thomas declares:  “My Lord and My God.”   Jesus commends him for making this profession of faith.  He has had enough evidence to overcome his concerns.  But, John has an audience that may not have had the same kind of encounter.  And therefore, in John’s account, Jesus also commends those who believe though they don’t see.

As a teen, I purchased a book with the title Evidence that Demands a Verdict.  In that book Josh McDowell did his best to marshal all the evidence he could to prove that Jesus had risen from the dead.  He tried to answer all the questions and turn aside every attempted challenge.  But is that what we need to believe?  Or, can we take Jesus at his word, and receive the blessing of believing while not seeing.  I’ve seen many attempts to prove that the resurrection occurred, but rarely does one succeed in converting the true skeptic.

So, on this Second Sunday of Easter, do we have enough evidence to receive the gift of resurrection?  Are we ready to be transformed by our encounter with the risen Christ?   As we contemplate these questions, perhaps we might find helpful this observation by Bruce Epperly.

Something dramatic happened that can’t be reduced to a tall tale, repetition of myths of death and rebirth, or a rotting corpse. Something mysterious and amazing occurred that can’t be confined by a literalist understanding of the biblical stories. As the gospel of John proclaims, there is always more to Jesus than our own fabrications or the written text: his life, death, and resurrection will always transcend and sometimes transform the rational mind, opening the mind to a deeper rationalism in which all is wonder and miracle. Now Jesus did many other signs in the presence of his disciples, which are not written in this book. 31But these are written so that you may come to believe* that Jesus is the Messiah,* the Son of God, and that through believing you may have life in his name. (John 20:30-31)

The experiences of Mary, of the ten, and of Thomas, offer testimony to the transformative nature of Christ’s resurrection.  Something happened that our attempts at providing rationalist answers fall short of.

Many other stories could be told, but for John, these are sufficient to encourage our belief that Jesus is the Messiah and Son of God, and therefore, as a result – have life.  Turning again to Bruce Epperly:

This Easter, open to possibility, awaken to wonder, and look for hints of Jesus’ resurrection in your own cells, your spirit, and the world around. Look for miracles and, as Wendell Berry counsels, practice resurrection. You will discover that Christ is Risen in your life – today

That is the point of Easter, even a week later!  Life conquers death – in all of its mystery.
Email Post
Labels: Belief Bruce Epperly Easter faith Gospel of John Lectionary Reflections Resurrection St. Thomas