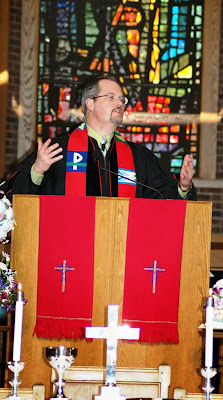 
14 Now after John was arrested, Jesus came to Galilee, proclaiming the good news of God, 15 and saying, “The time is fulfilled, and the kingdom of God has come near; repent, and believe in the good news.”

16 As Jesus passed along the Sea of Galilee, he saw Simon and his brother Andrew casting a net into the sea—for they were fishermen. 17 And Jesus said to them, “Follow me and I will make you fish for people.” 18 And immediately they left their nets and followed him. 19 As he went a little farther, he saw James son of Zebedee and his brother John, who were in their boat mending the nets. 20 Immediately he called them; and they left their father Zebedee in the boat with the hired men, and followed him.

The story is told, perhaps it’s apocryphal, that my grandmother spotted me preaching in my crib, and she told my mother that I would grow up to be a preacher.  While I spent my youth as first an acolyte and then a lay reader in the Episcopal Church, I took a while before I caught hold of that vision. I never intended to be a pastor. I went to seminary with the intention of being a college professor.  I was going to teach church history and preach on occasion, but not as a full-time pastor.  It is interesting how life works out. My dreams of an academic career eventually gave way to a recognition of a call to preach the good news of God’s realm.

There is a progression to Mark’s story of Jesus.  First came John and he preached a message of repentance.  He prepared the way for the kingdom to emerge. He wasn’t the one who would inaugurate it, but he would pave the way.  Then, Jesus came on the scene. After his baptism and his temptation, he took up his calling as a preacher.  The time had come for the Realm of God to be revealed. Whether or not the world was ready, God was ready.  So, Jesus proclaimed the Good News of the Kingdom.
Like John, Jesus called on the people to repent and believe. By using the word “believe,” Jesus wasn’t talking about signing a doctrinal statement. He was talking about the need to entrust one’s life to the one who ushered in the realm of God. The time had come to make a decision. It’s risky to make the decision. We prefer not to rock the boat. For preachers, there is always the danger of upsetting the people who pay the salary. We’d like to be prophetic, but without job security that can be difficult.

Jesus is typical of prophets. He knows that sometimes you have to step on toes to get the message across. But, in Mark, Jesus is coy about the kingdom. It seems as if Jesus is always hushing those who recognize him. Scholars even have a term for it – the “Messianic Secret of Mark.”  The kingdom is coming. Jesus is proclaiming it. He’s revealing it in his actions, including his acts of healing. But, he doesn’t allow those who “get it” to spill the beans.  Perhaps there is the need to let the full measure of the Good News to soak in, to permeate the community so that when the time came they would recognize that the kingdom had truly come into their midst.   Why Jesus needs to do this may result from his recognition that it’s easy to misunderstand the message.

With the celebration of Martin Luther King’s birth and legacy fresh in our minds, it is worth reflecting on how his famed “I have a dream” speech has been used to sustain the status quo. White folks like to think of his speech as lifting up color-blindness. The fact is, there is no such thing when it comes to human relations.  Our color, our culture, all help to define who we are as the people of God. So, it’s no wonder Jesus wanted to keep things under wraps until the proper time.

The start of Jesus’ ministry is linked to the calling of the first group of disciples, all of whom, according to Mark are in the fishing business.  He invites them to leave their nets and follow him, taking on a new calling – not casting nets in the lake but casting nets into the human world to gather those who are willing to participate in the in-breaking of God’s realm.  It is important to note that when Jesus issued the call, the two sets of brothers didn’t ask for time to think about the invitation. They didn’t go and ask for permission from their parents. They didn’t take the time to sell the boats or even put them in storage. They just dropped their nets and “immediately” followed Jesus. If that’s too fast for you, it’s surely too quick for me!  But Jesus isn’t one to wait around for procrastinators. The offer is on the table, so come and join me if you will.  And they do!

In reflecting on the juxtaposition of the description of Jesus’ initial ministry and his calling of the two sets of brothers to be his disciples, I’m impressed that Jesus quickly recognizes that if the ministry is going to expand he is going to need partners in ministry. We talk about “solo pastors,” by which we mean a congregation with one professional clergyperson on staff.  While congregations can get too dependent on clergy, the work of the ministry isn’t a one-person job!

So Jesus begins to call to himself a company of preachers. He is going to prepare and empower them to expand his own ministry of proclaiming the good news of God’s realm.  He gives them their assignment, but he doesn’t send them out immediately even if they didn’t waste time in taking up the call. They will need to spend time with him, getting to know him, his message, and his methods. The traditional seminary education has been laid out on a three-year plan. The reason why this was chosen is that tradition suggests that Jesus’ own ministry lasted three years and that he devoted a good portion of that three years discipling/training the twelve for the ministry of preaching. While we have traditionally thought of the company of preachers being limited to the twelve, there are reports of a group of seventy sent out preaching (Luke 10:1).  So, surely the company of preachers is larger than the twelve, and it’s possible that counted among these preachers were women as well as men.  Besides, Jesus commissions Mary Magdalene to preach the gospel to his disciples (though not in Mark, since Mark doesn’t have a resurrection appearance by Jesus).

So, what is our calling – not only as clergy but as the people of God?  Are we not called as a people to share the good news that the kingdom of God is at hand?  Is Jesus not gathering up a new cohort of Kingdom preachers?  If so, is your name on the list of those entrusted with the task of going fishing?
Email Post
Labels: Call to Ministry Disciples Epiphany Evangelism Gospel of Mark Jesus Christ Kingdom of God Lectionary Martin Luther King Preaching