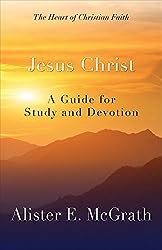 “Who do you say that I am?” asked Jesus. Peter answered: “You are the Messiah, the Son of the living God” (Matthew 16:16). Whatever it means to be a Christian, Peter’s confession factors in as the central confession of faith. While Christians believe many different things, there is a common consensus that Jesus is at the center. Of course, that simple statement offered by Peter offers plenty of room for interpretation.

Many a Christian theologian (professional or not) have offered a take on the question of who this Jesus might be. He could be a prophet, a healer, a good and decent man, a teacher, or the very incarnation of God. Among those who would want to lift up the premise that Jesus is the incarnation of God, who has revealed the true identity of God in his life, is Alister McGrath, Andreas Idreos Professor of Science and Religion and at Oxford University and Director of the Ian Ramsey Centre for Science and Religion. Before coming back to Oxford he was Professor of Theology, Ministry, and Education, along with serving as Head of the Centre for Theology, Religion, and Culture at King’s College London.  Beyond his academic posts, McGrath is an Anglican priest and is counted among England’s evangelical community.  An accomplished historical theologian with a background in the sciences, he has proven himself to be a prolific author writing on numerous areas of theological interest.  He is also a devotee of C.S. Lewis, and like Lewis, he has made a name for himself by bringing theological discourse to the general reader.

The current book under review is the third volume in McGrath’s "The Heart of Christian Faith” series.  Like the previous volumes that focused on the creeds (volume one) and the “Living God” (volume two), this book is brief and readable.  As with the previous volumes it has a strong orthodox/evangelical stance, but it is also written with a certain amount of cautiousness (humility perhaps).  McGrath is not shy in affirming traditional Christian perspectives, especially those that have roots in Scripture and support from the historic creeds.  It should be noted that when we speak of evangelicals from Britain they often lack the edge present among many American evangelicals. That is the modernist/fundamentalist battles that helped define American Christianity never had their day in England.  That said, McGrath is at heart an apologist for the Christian faith.  Perhaps because the intended audience is the lay person seeking to better understand the Christian faith, the presentation is very personal, bringing in personal stories of his own journey to and with Christ.

In this particular volume (third in the series), he takes up the question of the identity of Jesus Christ, both as a historical personage and as one who is confessed as the one in whom God has become incarnate.  While the series itself focuses on the heart of the Christian faith – that is the essentials of the faith as affirmed in the Creeds – in this volume we encounter the very "heart of the Christian faith," which we encounter not simply as an abstract idea but as a person.

The book is composed of five chapters. They begin with laying out the premise that Jesus of Nazareth is the turning point of human history.  Using the Gospel of Mark as he guide, he seeks to set out a defense of why we should consider Jesus worthy of following.  Insisting, as Lewis also did, that Jesus is not a mere teacher of religion, he is also healer and forgiver.  But beyond this, Jesus is the crucified one whom God raised from the dead.  In the second chapter McGrath continues the conversation by considering the theological big picture, focusing on the titles given to Jesus – Messiah, Son of God, Savior, and Lord.  Jesus is, according to McGrath’s presentation, the mediator between God and humanity.  Taken together these titles affirm that Jesus is not simply human, but surely must be divine.

With the big picture laid out, McGrath offers two chapters that focus on Christmas and Good Friday.  That is, he examines the confession that Jesus is the incarnate one, that he is the full revelation of God in human flesh. When we look at Jesus, McGrath is convinced that the idea of incarnation is the only concept that can make sense of the evidence. In exploring this doctrine, McGrath lifts up the doctrine of the “two natures,” following Chalcedon in confessing that in Christ we find one who is fully human and fully divine. He writes:

The Christian idea of the Incarnation brings out this fundamental aspect of the identity of Jesus: he is the one who shows us and tells us what God is really like. To trust in God is thus also to trust in the one who makes God known. (p. 63).

The fourth chapter moves from incarnation – the confession that in Jesus we meet the Word of God in the Flesh – to the Cross. Christians have from the very beginning of the movement faced the need to make sense of the Cross. How can God be revealed in one who died the death of the accursed? The doctrine of the atonement emerged as a way of making sense of the cross.  In one form or another, the church has confessed that in the death of Christ that which is broken in humanity has been restored (set right) – by his wounds we are healed.  McGrath recognizes a variety of atonement theories exist, from ransom to substitution. He explores the sacrificial elements and tends toward embracing the Protestant concept of substitution, but he doesn’t want to go too far with this. He is content to confess that in Christ, that which is broken has been restored, without going into how this is accomplished. As one who struggles with the meaning of the cross I was somewhat surprised but pleased by his reticence in this matter.

In the final chapter McGrath turns to the way in which Jesus affects our lives. Orthodoxy isn’t enough – confession of Jesus as the one who was born, died, and rose from the dead is supposed to lead to a transformed life.  To follow Jesus will eventuate in discipleship and living an ethical life. It is a process of becoming more like Jesus. Without this eventuality, the incarnation fails as a revelation of God.

What should we make of this little book?  It is, as is true of most of McGrath’s books an expression of a thoughtful orthodoxy.  It is a fairly generous orthodoxy, holding strong to traditional confessional formulations even as it leaves the reader room to interpret what it means to confess Jesus as Christ and Son of God. Although it doesn’t have a study guide, this little book could make for a fruitful conversation about who Jesus might be and why it matters to us.  For those who stand on the more progressive/liberal side of the theological continuum McGrath will seem rather conservative, but he offers a poignant description of traditional Christianity, often in conversation with C.S. Lewis.  If you like Lewis, then you should like McGrath.

Robert Cornwall said…
Steve, McGrath is probably a bit conservative and traditional for your taste, but it is readable and poses interesting questions.
4:18 PM