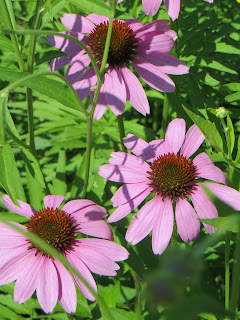 25 “Righteous Father, the world does not know you, but I know you; and these know that you have sent me. 26 I made your name known to them, and I will make it known, so that the love with which you have loved me may be in them, and I in them.”

***************
On the Seventh Sunday of Easter, many preachers/congregations will choose to celebrate Ascension Sunday. The Gospel reading for Ascension Sunday is Luke 24:44-53. The promise of Ascension Sunday is that Jesus, despite leaving the disciples physically, is sending them out on a mission. Luke will pick this up again in the first chapter of Acts, where he recounts the ascension story and tells the gathered community that when the Spirit falls on them, they are to preach the good news to the world beginning in Jerusalem (Acts 1:8). The reading for the seventh Sunday of Easter also speaks of mission, though we find Jesus engaged in a final moment of teaching before going to the cross. Thus, for this reading Jesus has not yet died or risen from the grave, and thus isn’t ready to ascend. But, he does pray for the disciples in what is often known as Jesus’ high priestly prayer. In this prayer he offers up a vision of mission that is tied to unity among the members of his community.

One of the constant themes in John is the revelation of God’s glory in Jesus. It is the reason for the incarnation (John 1:1-18). This glory that Jesus derives from the Father is given to those who follow him, so that the world might see and believe. If the world is to see the glory of God revealed in Jesus, then there needs to be unity among the followers of Jesus.

Unity and mission have long been associated with each other. The ecumenical movement was essentially born on the mission field. Missionary leaders such as Robert Speer spoke of a unity that went beyond fraternal relations, but one that reflected the unity within the Godhead, as described here in John 17. As Speer declared: “You cannot express One God in a split church” [Christianity and the Nations, (Fleming Revell, 1910), p. 339].

My own denominational tradition was born out of a concern that disunity among Christians inhibited the spread of the Gospel on the frontier. Thomas Campbell issued his Declaration and Address in 1809 lamenting the damage done to the faith because of the divisions within Christianity. He offered his own solution, which may not have resolved the problem, but it was an important diagnosis of a disease that continues to disrupt the Christian faith.

In this final prayer before Jesus’ arrest, he prays for his followers, asking that they would be one even as Jesus is one with the Father. He prays that they would be one so that those who hear the word of Jesus might believe. In their oneness, our oneness, the world will know that the Father sent the Son, who in turn sends the community out in mission. In his address to the churches on the Pennsylvania frontier, Campbell held out the premise that Christians could unite on essentials, and leave aside non-essentials (so called human inventions), so that they might be bound together in love. The problem is that we’ve never been able to distinguish fully between what is an essential and what is a non-essential. The Campbells (Thomas and Alexander) thought that creeds got in the way. They weren’t opposed to the use of creeds as summaries of the Christian faith, they just didn’t think they should be used as tests of fellowship. Influenced by the likes of John Locke the offered a simple Christianity that they believed was present in the New Testament. Unite on these things and then one could move out into the world as one body and influence the world positively on behalf of Christ. They looked to John 17 for guidance. They believed that this was their duty as followers of Jesus to unite with one another.

In an age that has largely discounted denominations the sense that unity is something that needs to be pursued seems less urgent. In 1938, just as he was about to take the reins of leadership of the Federal Council of Churches, Edgar Dewitt Jones (founding pastor of Central Woodward Christian Church—then in Detroit) spoke of the need to put Christian unity front and center, especially among the youth. He noted that to this point young people were being trained as “denominationalists,” and that had to change. There is value in learning about one’s tradition, but if it fails to reveal the “evils of the partisan spirit, the weakness of division, and shamefulness of competitive Christianity,” it isn’t a truly catholic understanding of the church.   He declared that “it is a magnificent achievement to permeate a church with the spirit of reunion, to keep before every phase of congregational life the unanswered prayer of Jesus for the oneness of his followers, together with the inspiring stories of the apostles of unity, the men who caught this ‘vision splendid’ and became flaming prophets of a reunited Christianity” [Jones, The Great Business of Being Christian, Harper, 1938, pp. 88-89].

The unity for which Jesus prays takes many forms. It starts in the local Christian community—our ability to share the love, glory, and grace of God is influenced/affected by the relationships within the community. To what degree do we reflect God’s person in the way we live together? But it moves beyond that to every form that the Christian faith takes. As Luke Powery suggests, what Jesus is suggesting here is a discipleship of resistance. He writes that “a call to unity resists temptations to divide along racial, educational, socioeconomic, and gender lines. To divide is easy. To be one is difficult” [Powery, in Preaching God’s Transforming Justice, Year C, p. 248].


When the ecumenical movement was born at the turn of the 20th century the focus was on denominational/theological divides. The same was true for the Campbells and Barton Stone at the beginning of the 19th century. Indeed, it was the issue that drove the conversation in England in the early 18th century as people like John Locke tried to find a path across denominational lines. But as Luke Powery reminds us, the divides are even broader than this, and the path to unity is not easy. Thus, the prayer of Jesus remains unfulfilled, or perhaps better, unfinished. That love that God shared with Jesus and Jesus shared with his disciples is there for us to experience so that we might express to the world God’s love for the world.
Email Post
Labels: Christian Mission Christian Unity Disciples of Christ Easter Edgar DeWitt Jones Gospel of John John 17 Lectionary Reflections