A Trinitarian Declaration of Truth - A Lectionary Reflection for Trinity Sunday, Year C 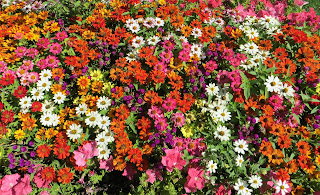 ***********************
It is Trinity Sunday and the lectionary suggests texts that at the very least imply that God is to be named in Trinitarian fashion. Such is the case with this brief reading from Jesus’ Farewell Address. As told to us by John, Jesus tells his disciples, who are receiving one final set of instructions before he goes to the cross, that there is much more to learn but insufficient time to explore it all. There’s no need to despair as the Spirit of Truth will guide them to the truth they need to discover.

Christians may have different takes on the doctrine of the Trinity, but the vast majority speak of God in Trinitarian terms. While we are monotheists who affirm the credo that there is but one God, unlike Muslims and Jews, we define this one God in terms of three persons (blessed Trinity). Traditionally we have named God as “Father, Son, and Holy Spirit” (Matthew 28:19-20). Further unpacking this declaration, theologian Patricia Wilson-Kastner writes that “We worship a Trinitarian God, who created us in love, who redeems us through the unmerited power of the resurrection of Jesus, and in whose Spirit we are joined together in the holy and eternal life of God.” Wilson-Kastner then reminds us that we speak of this God not with literal language but with models such as analogy, imagery, and metaphor [Praising God, p. 19]. It is good to remember that metaphor and analogy refer to something real. They’re not mere words.

While theologians debate the inner workings of God’s nature, it is in worship—in our prayers and hymns—that we give voice to our understandings of God as Trinity. Even if we don’t understand the full complexity that is the Trinity, we can give voice to that complexity that is God in our hymns and songs.  As the chorus of Thomas Troeger’s hymn “Source and Sovereign, Rock and Cloud” puts it, “May the church at prayer recall that no single holy name but the truth behind them all is the God whom we proclaim” [Chalice Hymnal, 12].

What we encounter in John 16 isn’t a straightforward Trinitarian formula as in Matthew 28, but in its own way this passage gives us a sense of the interrelationship that is God’s nature. In John 16 we hear that the Spirit witnesses to Jesus who reveals the Father who gifts Jesus who then is witnessed to by the Spirit of Truth.  What belongs to the Father belongs to Jesus and the Spirit reveals this to the world, or at least to the disciples.

Central to this conversation is the affirmation present in John that the Spirit gives witness to the truth. Truth is important in John. Pilate wants to know the truth, but isn’t able to handle it. The witness here is to Jesus, the bearer of truth, a truth that belongs to the Father.  Theologians speak of two perspectives on the Trinity – the economic and the immanent. The later focuses on the inner life of God, while the former focuses on the way in which we encounter the God whom we know as Trinity. Here we can say that John is concerned about the economic Trinity. He’s concerned about how Jesus reveals the truth that is the Father, and how the Spirit will continue to interpret that revelation to and through the disciples.

Because the doctrine of the Trinity is difficult to understand, leading to generations of theologians wrangling over words and their meanings, by and large Christians have left the doctrine aside. It seems to have no real relevance to daily life. That we even observe Trinity Sunday may seem odd to many in our congregations. If asked, they may affirm that their Trinitarians, but when pressed their understandings of God’s nature may diverge in one of two directions.  Some may essentially be unitarians (and unitarians of the second or third person). Others may express themselves through a form of tri-theism in which they end up with three gods, especially those who wish to affirm the divinity of Christ. Thus, we must return to Wilson-Kastner’s reminder that when we speak of God we do so with metaphor and analogy. It isn’t that God is mere metaphor, but our words simply cannot communicate the full range of we are expressing about God.

So, what can we say about this brief passage that might reveal something about God and God’s presence with us. The reference to the Spirit as truth is key. We saw this already in the Pentecost text from John 14. So what is the nature of truth. Bruce Shield’s helpfully suggests that “truth is relational.” Rather than truth being propositional—factual statements—he writes that “what people hunger for today is the kind of truth that flows out of relationships and helps to develop and cement relationships. Here a statement by Jesus affirms a truth that comes out of the relationship of Father, Son, and Spirt and that is given to persons related to Father and Spirit through the Son” [Feasting on the Word, C, 3, p. 47].

As we approach this text on Trinity Sunday, we not only hear a word about God, but a word about ourselves. Because God is relational, the people of God, who bear the image of God, are also relational. That is, we’re more than autonomous individuals. We need to be in relationship with others like us. That is, after all, the message of Genesis 2. Therefore, when we speak of God it is important to retain in our speech that relationality. While the traditional formula of Father, Son, and Spirit speaks to this relationality, there is the challenge of the formula’s gender specificity. It has been discovered that when we speak too often of God in masculine terms, not only do we conceive of God as male, but the male essentially is divinized. Thus, we need to raise the question of how to retain the relationality of the traditional formula, while at the same time broadening our language of God.  As for guidelines, Ruth Duck suggests:

Language used to speak of the Trinity should reflect love, justice, and equality, which are the marks of ethical life based in Trinitarian faith. This means that the language and images of Christian worship should not reflect a patriarchal culture of domination of women by men, which is suggested when God is always associated with masculine images such as ‘Father’ and ‘Lord.” Nor should it reflect racist culture by constantly portraying God as light and never dark. Fully Trinitarian liturgical language is emancipatory, showing the Holy One at work bringing justice and communion among humanity in the continuing mission of the Jesus the Christ through the power of the Spirit. [Praising God, p. 31].

Perhaps this is the key to speaking of God as Trinity—it requires doxological language. It is language of prayer and hymnody that helps us speak of God, and allows for diversity of metaphor.


So, if we can speak of God as Father, then can we not speak of God as Mother? If so, how do we express this reality without endlessly expanding the inner life of God? It might be wise simply to limit our formulas to triads, allowing us to then expand our reference points to other metaphors and analogies that can convey the message originally contained in the traditional formula. Using the words of Brian Wren’s hymn “Bring Many Names,” we can sing out: “Great, living God, never fully known, joyful darkness far beyond our seeing, closer yet than breathing, everlasting home: Hail and Hosanna, great, living God!” [Chalice Hymnal, 10]. We may not be able to peer into God’s inner nature, but in the ways that God has been revealed to us, we can attest to the relational nature of the God we encounter in Jesus, the incarnate Word, whose truth is attested by the Holy Spirit.
Email Post
Labels: Gospel of John Lectionary Names of God Patricia Wilson-Kastner Reflections Relational Theology Ruth Duck Trinity Trinity Sunday