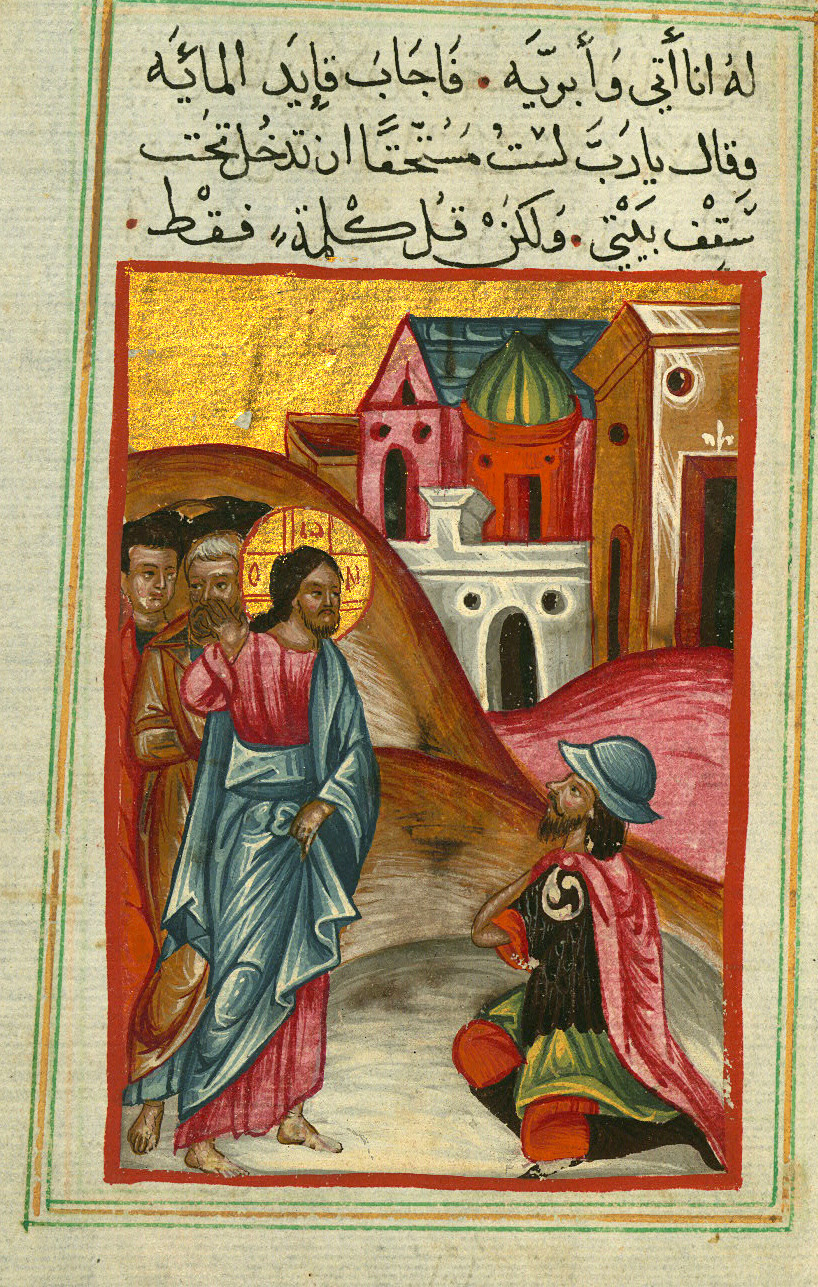 7 After Jesus had finished all his sayings in the hearing of the people, he entered Capernaum. 2 A centurion there had a slave whom he valued highly, and who was ill and close to death. 3 When he heard about Jesus, he sent some Jewish elders to him, asking him to come and heal his slave. 4 When they came to Jesus, they appealed to him earnestly, saying, “He is worthy of having you do this for him, 5 for he loves our people, and it is he who built our synagogue for us.” 6 And Jesus went with them, but when he was not far from the house, the centurion sent friends to say to him, “Lord, do not trouble yourself, for I am not worthy to have you come under my roof; 7 therefore I did not presume to come to you. But only speak the word, and let my servant be healed. 8 For I also am a man set under authority, with soldiers under me; and I say to one, ‘Go,’ and he goes, and to another, ‘Come,’ and he comes, and to my slave, ‘Do this,’ and the slave does it.” 9 When Jesus heard this he was amazed at him, and turning to the crowd that followed him, he said, “I tell you, not even in Israel have I found such faith.” 10 When those who had been sent returned to the house, they found the slave in good health.

A Roman Centurion was a patron of the synagogue in Capernaum. I think we need to start there. Does this surprise you? After all, the centurion was an officer in an occupying army. You would think he was a hated figure in the community, and yet he seems to be rather beloved. What should we make of this? What message does it send? Maybe we need to take each person on their own, and recognize their humanity, whatever their background or position.

We’re also told that this centurion had a slave whom he highly valued, but who was near death. In our day, we should view slavery negatively. Our own nation’s experience of slavery continues to infect life in our midst, even though we long ago abolished it. When we read about slavery in the Bible it is important to remember that slavery was ubiquitous in the first century. We can understand how the system worked then without affirming it going forward. Nonetheless, this centurion desired that the slave be healed, and hearing about Jesus, he asked leaders of the Jewish community in Capernaum to seek help from Jesus. They, recognizing his generosity and likely mercy toward the community, agreed to go to Jesus.  So, we must note the absence of any animus toward Jesus on the part of the leadership. They also display deep respect and affection for the centurion— “He is worthy of having you do this for him.” And Jesus agreed to go with them. What a beautiful picture—people sharing words of respect for others.

What should we make of this picture? Could this be a reflection of the message Jesus shared in his “Sermon on the Plain”? (Luke 6:20-49). Love enemies and don’t judge were among the messages Jesus delivered out on the plain. Now we see such a vision in play. There is, of course, in Luke a strong overtone of reaching out beyond the Jewish community to engage in ministry with and among Gentiles. This is one of those occasions, where we see Jesus engage in such ministry. Indeed, as Donald Musser suggests, this encounter is a reminder of Jesus’ concern for those we might call the outsider or the other. In fact, Musser suggests that the Centurion may represent for us those we now call the “nones”:

These modern-day Gentiles—often derided as unbelievers, agnostics, atheists, secularists, and sometimes apostates—are precisely the audience insiders need to engage as Jesus does the centurion’s delegates. Although separate from the institutional church, many of today’s religiously unaffiliated are “seekers” who are open to spiritual truth that enlightens and heals. [Feasting on the Gospels: Luke, vol. 1, p. 184].

There is in this encounter a strong sense of faith, but also hesitancy on the part of the centurion, who feels unworthy to approach Jesus. How then do we overcome this hesitancy?

In the centurion’s case, the hesitancy is rooted in his realization that it would be inappropriate for Jesus to enter his house. After all, custom dictated that Gentiles and Jews did not enter each other’s homes. They lived segregated lives. They might respect each other and value each other, but they also respected social convention. So he sends word to Jesus, telling him that he needn’t come to the house. The Centurion understands how the world works, or at least works in his context: “Just speak the word, and my servant will be healed.” The Centurion understands how authority works. Those in authority say the word, and it is accomplished. This is, of course, a rather hierarchical vision of the world, but it fits the person and the era. In his mind, everyone is under some authority, and in making the request for healing the centurion wants to make sure he recognizes Jesus’ authority. If he commands the servant to be healed, the servant will be healed. We learn that all happens as the Centurion suggested. Jesus gives the command from afar and when the delegation returns to the Centurion they find the slave healed (and ready to go back to work).

This part of the story is a good reminder of the power of intercessory prayer. My congregation prays for the sick. We’re often asked to pray for friends and family whom we know little about, but we respond in prayer on their behalf. When we hear good news we respond with joy and thanksgiving. The Centurion in essence is engaging in just this activity. He’s sending a prayer to Jesus via these two delegations. The first is composed of Jewish leaders who speak of his worthiness to be heard and the second delegation is probably composed of allies or even soldiers, who go with his blessing. They intercede with Jesus, and Jesus responds with hospitality and warmth. Turning again to Musser, he writes something that should resonate with us: “How many have experienced the sort of comfort and hope in time of need derived from knowing that people of faith were praying for them around the Globe!” [Musser, Feasting on the Gospels, 1:186].

As I reflected on what Musser suggests in his reading of the text, my mind went to what theologian Deanna Thompson shared with the Academy of Parish Clergy at our 2016 annual meeting about the power of prayer. A number of years ago Deanna was diagnosed with incurable metastatic breast cancer. By all accounts she should be dead by now, but she isn’t. Modern medicine has played an important role in her remissions, but she also lifts up the prayers that sustained her, most of which were shared from afar, especially those invited through social media sites like CaringBridge and Facebook.  Deanna discovered what she calls the “virtual body of Christ,” which is, “the body of Christ incarnated in, with, and through the power of Internet sites like CaringBridge.” [Thompson, Deanna A. Hoping for More:Having Cancer, Talking Faith, and Accepting Grace (p. 57). Cascade Books, Kindle Edition.] Deanna offers this important conclusion that I think reflects what is going on here. It’s a rather lengthy quotation, but I need to share the entirety so we can get the connection.

When it comes to the church universal, then, my understanding has been broken open to a new beyond—beyond what we Christians are able to imagine, beyond tidy categories of what counts as religious and what doesn’t.

Since the diagnosis, I’ve received a sage blessing from a Native American colleague, been prayed for in the synagogues of friends and colleagues, had Buddhist meditation sessions dedicated to me; and Jesus has even been asked a favor by a Jewish friend who took a gamble on my behalf.

I don’t know what else to call it but grace. And these gifts of grace from the virtual body of Christ enabled me to keep walking through the valley of the shadow of cancer, even through the darkest days of a Minnesota winter.  [Thompson, Hoping for More, (pp. 61-62). Kindle Edition.]

As a rational modern Western American Christian, this isn’t always easy, but here is an example. Now what is interesting in all of this is that the slave is seemingly unaware of all of this. The slave plays a rather passive role in the story. This is, after all, the story of the faith of the Centurion, and that this expression of faith stands out because it surpasses that of the community of faith that nurtured Jesus. As Diane Chen suggests, that “should give us pause in making judgments about who is deserving of and capable of appropriating God’s grace and salvation” [Preaching God’s Transforming Justice, Year C, p. 268.]  At what point do we, as Chen diagnoses, “harbor discriminatory attitudes that include and exceed familiar categories of racism, sexism, and ageism. We judge other people’s worthiness every time we withhold compassion or refuse to stand up for justice in solidarity with the oppressed, the ostracized, and the underserved. Will we take our cues from Jesus and let God’s compassion and justice demolish the dividing lines we draw to protect ourselves?” [Chen, in Preaching,  pp. 268-269].

This brief story, which emerges out of the Sermon on the Plain, invites us to consider what it means to be a disciple of Jesus, to be as one under authority. In this case, we live under God’s authority so that we might experience and express the compassionate grace of God through prayer and service to others.