Great Is the Lord, and Greatly to be Praised - A Sermon for Pentecost 2C 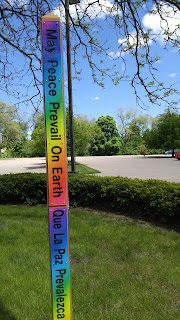 Last Sunday when I preached the first in a series of sermons from the Psalms, we heard the Psalmist declare: “O Lord, our Sovereign, how majestic is your name” (Ps. 8:1). This morning the Psalmist invites us to sing a new song, for “great is the Lord, and greatly to be praised.”

The Book of Psalms is a prayer book and a hymnal that is designed to help us be in relationship with the living God. Dietrich Bonhoeffer wrote that “the Psalms have been given to us precisely so that we can learn to pray them in the name of Jesus Christ” [DBW, 5:157].

This particular song is called an “enthronement Psalm.” It probably was written during the time of the second Temple, after the Davidic kingdom was gone. Once upon a time the people wanted a king so they could be just like all the other nations. That never really worked out all that well. There were some good kings, but even the best kings had their problems. After the Babylonian exile ended the monarchy, the land of Israel no longer had a human king. Unlike the other nations, their king was God. They probably sang this song at an annual festival celebrating God’s sovereignty. They declared that the God who made the heavens should be revered above all gods. After all, the other gods were merely idols.

In this song we hear the invitation to seek first the realm of God (Mt. 6:33). We hear the call to give God our ultimate allegiance. That’s the message of another prayer from the Bible, the prayer that Jesus gave the disciples.

One of the best-known hymns of the church invites us to “worship the King, all glorious above, and gratefully sing, God’s wonderful love, our Shield and our Defender, the Ancient of Days, pavilioned in splendor and girded with praise.” [Robert Grant, 1833, Chalice Hymnal 17]. Yes, God is our shield and our defender and worthy of our praise.

Psalm 96 not only celebrates God’s role as creator, but it also celebrates God’s role as judge. In ancient Israel the king not only ruled, but he served as the nation’s judge. In that role, the king decided what is right and what is not. We see this play out in verse 10, where the Psalmist declares that “the Lord is king! The world is firmly established; it shall never be moved.”  But, not only that -- God “will judge the peoples with equity.” That word “equity” is an important one. In fact, it’s the lynchpin of this Psalm. By using the word equity, the Psalmist declares that God doesn’t merely treat us equally, God treats us fairly.

When we were discussing the name for the regional entity that would replace Metro Coalition of Congregations and the Detroit Clergy Group, we decided on the name Detroit Regional Interfaith Voice for Equity or DRIVE. We chose the word “equity” for a reason. While equality is important, it’s not enough. That’s because not everyone’s situation in life is exactly the same.

We all know that you don’t treat a child the same as an adult. We have child labor laws for a reason. The state doesn’t give drivers’ licences to ten-year-olds. We know that children are vulnerable and need protection. We treat those with disabilities differently as well. If you go out into the parking lot, you will find several parking spots marked with blue stripes and a sign declaring these to be  spaces for the disabled. You have to have a special license plate or tag to use those spaces. If I understand the law correctly, it doesn’t matter if no one else is around. If you don’t have the right credentials, you don’t use the space!

If you’ve spent time on Facebook you may have seen a cartoon that illustrates the difference between equality and equity. Since I don’t have a projector, you’ll have to take my word for it. The first cell of this cartoon pictures three children of different heights standing behind a fence trying to watch a baseball game. All three of them are standing on boxes of equal height. That works well for the tallest child who can now see with ease. The second child can also see the game, though his chin sits right at the top of the fence. As for the third child, all that this child can see is the fence. That’s equality. Everyone is  treated the same. Unfortunately that doesn’t work very well for the third child.  So, in the second cell, we discover that the first child no longer has a box. That’s because this child doesn’t need an assist.  The second child stands on the same box as before, but the third child stands on two boxes. Now all three of them can see the game, because they’re all at the same level. The message of the image is that equality equals sameness. Equity is about fairness.

The Psalmist invites us to give praise to God who judges with equity. The Psalmist recognizes and celebrates the wisdom of God, who doesn’t treat everyone the same. God treats us fairly depending on our situation. In the end we’re all on the same level, but along the way some need more help than others. If God treats us fairly, then surely we should treat each other fairly.

Perhaps that’s why the Psalmist celebrates the coming of God the judge. When God comes to judge the world, God comes to set things right. There’s no fear of punishment in this song. There is only hope and celebration. So the heavens are glad and the earth rejoices. When the Lord comes, the “trees of the forest sing for joy.”

When we think about judgment and justice we often think in terms of “retributive justice.” You do something wrong and you get punished. I’ve only gone before a judge once in my life. It was for a speeding ticket. I remember standing before the judge with fear and trembling. I was polite and contrite, and the judge decided to cut my fine in half. That wasn’t the last speeding ticket that I got, but it was my last visit to a judge. In this form of judgment I got what I deserved!

There are two other kinds of justice. One is called “distributive justice.” It is focused on fairness. Our tax system is designed to distribute resources to where they’re needed. I don’t have any children in the school system, but my taxes pay for the schools. Some of my taxes go to pay for the needs of children in communities less affluent than my own. In the end, I benefit from being part of an educated community. The other form of justice is called “restorative justice.” “Restorative justice” is an alternative to “retributive justice.” Instead of focusing on punishment, it focuses on restoring relationships. It holds people accountable, but seeks to mend their lives.

As we await the coming of the one who will judge the world with righteousness and truth, let us sing a new song. Let us bless the name of God and tell of the salvation that God brings to God’s creation, for “great is the Lord, and greatly to be praised!”