Do the Math - Lectionary Reflection for Pentecost 16C 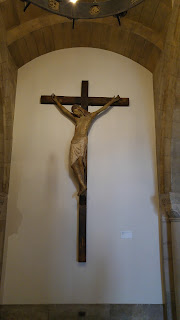 25 Now large crowds were traveling with him; and he turned and said to them, 26 “Whoever comes to me and does not hate father and mother, wife and children, brothers and sisters, yes, and even life itself, cannot be my disciple. 27 Whoever does not carry the cross and follow me cannot be my disciple. 28 For which of you, intending to build a tower, does not first sit down and estimate the cost, to see whether he has enough to complete it? 29 Otherwise, when he has laid a foundation and is not able to finish, all who see it will begin to ridicule him, 30 saying, ‘This fellow began to build and was not able to finish.’ 31 Or what king, going out to wage war against another king, will not sit down first and consider whether he is able with ten thousand to oppose the one who comes against him with twenty thousand? 32 If he cannot, then, while the other is still far away, he sends a delegation and asks for the terms of peace. 33 So therefore, none of you can become my disciple if you do not give up all your possessions.

When I read this passage words from Dietrich Bonhoeffer’s book Cost of Discipleship come to mind: “When Christ calls a man, he bids him come and die.” Everyone who knows Bonhoeffer’s story knows of his execution and thus connects his death with these words. This is what it means to be a disciple of Jesus. Bonhoeffer explored in great depth the relationship of discipleship and the cross, and for him the cross involved the expectation of suffering. It’s not just any suffering, it’s not sickness or injury, it is suffering that comes as a result of one’s confession of faith in Christ. Looking out at his own context of 1930s Germany, he could take note of how “a Christianity that no longer took discipleship seriously remade the gospel into only the solace of cheap grace” [Discipleship, p. 86].

The cost involved in the kind of discipleship that Bonhoeffer described involves a choice. Will we follow Jesus no matter where he leads? Are we ready to do the math and count the cost of discipleship? Are we ready to let go of the ties that bind us to family, nation, community? It is interesting Bonhoeffer remained close to his family and friends to the very end. He did lose his position as a teacher and pastor. He was imprisoned and finally executed, though the latter was related less to his confession of faith and more with his involvement in the resistance to Hitler’s rule in Germany. Still, there was a cost involved in standing against tyranny, and this resistance was nurtured by discipleship.

When Bonhoeffer was writing his important theological works the cultural Christianity that marked the nation of Germany was being tested. Christians were being asked to decide whether to stand with the regime or with Christ. There were those—the German Christians—who embraced Nazi ideology and reformulated the faith to fit it. Is it possible that we can fall prey to similar temptations? Can the flag become a sacred symbol? I find it interesting as I drive around the community the number of churches flying the American flag high above any other sacred symbol. There were others who rejected Nazi ideology, at least when it came to mixing the ideology with their theology. They weren’t ready to embrace an Aryan Christ, but they were proud Germans and supported their government. Bonhoeffer was of the opinion that this was insufficient. One had to go beyond the protests of Barmen and stake a claim of opposition to Hitler, and that opposition, as he very well knew could cost one’s life, or at the very least great suffering.

Jesus had gained quite a following among the people. Miracles can do that! It seems that the time had come for Jesus to do a reality check. Who was really ready to be a true disciple? Who among his followers was ready to let go every relationship that might stand in the way of following Jesus to the cross? Here in Luke Jesus uses the strong word “hate.” The kind of hate he speaks of here isn’t that angry emotional hatred that we associate with the word. Instead it is the act of distancing oneself from all entanglements with the world. It is a word about choices and decisions. As we learn in the parable that precedes this passage, when the invitation to the Great Banquet, which is symbolic of the realm of God, those invited turn down the invitation because they’re too busy to attend. This leads the lord of the banquet to invite those not usually invited so that the original invitees can’t change their mind and come at the last minute. They had their chance, but they wasted it (Luke 14:15-24). Now the question is thrown out to the crowd that follows him. When the invitation is extended, will they accept or will they make excuses?

If we’re going to accept the invitation to discipleship, we’ll have to do the math. We’ll have to count the cost. Jesus illustrates this step with two brief parables or illustrations. The first has to do with building a tower. If you’re going to build a tower, you first have to determine the cost. Otherwise you’ll run into problems later on in the project. There’s a partially finished jail in Detroit. The county embarked on the project, but apparently ran out of money. So it sits, an unfinished unsightly mess. They would have been wise to heed Jesus’ words. The second parable has to do with the decision to go to war. If you go to war you had better plan for it. Wars are costly—bother in terms of human beings and money. If you’re going out to face an enemy that has 20,000 soldiers under arms, and you have 10,000, what is the likelihood of success? Would it be better to sue for peace or undertake the battle? Only wise planning can determine whether success is possible? The United States went to war in Iraq in 2003. That was thirteen years ago. Many died or were wounded in this war. Billions of dollars were spent in this war. Last I knew the war was still going on, though the enemy has apparently changed. What was promised as a quick victory has turned into another quagmire. Doing the math might help in such situations.

So what are the costs for being a disciple of Jesus in 21st century North America? What challenges do we face? For Luke’s community, even if death wasn’t likely to occur, there were certainly choices to be made. To follow Jesus likely meant being cut off from family and friends. In that culture being cut off was like death.

What are the costs of discipleship for Christians living in the United States or Western Europe? What suffering will we endure for our confession?  Probably very little. I’m amused every Christmas at the claims made by those who feel put upon because Walmart employees say “Happy Holidays” instead of “Merry Christmas.” Or, those who feel persecuted because they can’t put a crèche on the lawn at city hall, even if they’re willing to add Santa and his reindeer to the scene.  Or what about those who feel persecuted because they can’t pray at a football game? I could go on, but you know the drill. For those of us living in a land that guarantees freedom of religion, as long as that freedom doesn’t impinge on the freedoms of others, what are the costs of discipleship?

We might not face the prospect of suffering, but I know that brothers and sisters in places like China, Syria, Turkey, Libya, Iraq, and Iran, do face significant costs. Christians who have lived for centuries on the Nineveh Plain in Northern Iraq have faced difficult choices ranging from forced conversion to flight.

I expect they hear this passage differently than do members of my congregation.  When the biggest choice we face is whether to go to church or go to a brunch, then discipleship has lost its costliness. Grace is often cheap for us. How then do you hear this passage anew?
Email Post
Labels: Adolph Hitler Choices Costly faith Cross Dietrich Bonhoeffer discipleship Germany Gospel of Luke Lectionary Reflections