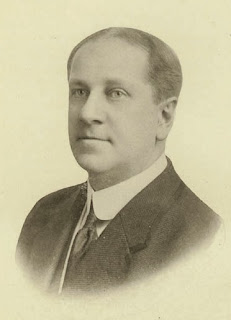 The speech that follows was given by Dr. Edgar Dewitt Jones, then Senior Minister of Central Woodward Christian Church of Detroit Michigan (now Troy, MI), and at the time also the President of the Federal Council of Churches. It was delivered at the Biennial Meeting of the Federal Council of Churches, of which he was serving as President. The date was Tuesday December 6, 1938. It was broadcast over Red Network of the National Broadcasting Company (6:45-7:00 PM). It was released by the Department of National Religious Radio in New York City.  This transcript was found by me in the Edgar Dewitt Jones papers housed at the Disciples of Christ Historical Society. I spent several days in 2013 at the Historical Society working through his papers. In the spirit of Christian Unity, a vision I share with my predecessor, I decided this was a speech worth sharing.

Thirty years ago in Philadelphia the Federal Council of the Churches of Christ in America was born. The organization began humbly with a modest budget, but those who founded it dreamed dreams and saw visions. Nor did they dream in vain.

Today the Federal Council is the grandest implementation of cooperative Christian in the world. Twenty-three large and representative Christian bodies of America with more than twenty million members constitute its fellowship. The Council operates through eight departments, one high commission, employs nineteen secretaries, assisted by an efficient staff.

On the skyline of the Council loom grandly the figures of my eight predecessors in the headship of the Council. Each of these men made a unique contribution and left the stamp of his personality upon the Council. Bishop E. R. Hendrix brought to his presidency nobility of character and pioneering administrative skill; Dr. Robert E. Speer, a grandeur of greatness and a world horizon; Dr. Shailer Mathews, a scholarly mind and philosophical outlook; Dr. S. Parkes Cadman, a catholic spirit, sparkling versatility, and a commanding eloquence; Bishop Francis J. McConnell, a prophet’s forthrightness, coupled with a passion for social and economic justice; Dr. Frank Mason North, an Olympian personality and a superb churchmanship; Dr. Albert W. Beaven, a rare combination of the shepherd heart and the evangel’s fervor. And as for Dr. Ivan Lee Holt, my immediate predecessor, his administration was baptized in the spirit of a passion for Christian unity and distinguished by a magnificent obsession for the reunion of the divided house of God.

It is not inappropriate to speak of the Council as a good Samaritan, healing humanity on the highways of the world. In truth, it is a kind of house by the Side of the Road, where the sons of men pass by. Almost every human need sooner or later comes to the notice of the proper department. The Council has sponsored relief for the little evangelical minorities in Hungary, Russia, the Ukraine, Spain and Roumania; aided the starving Chinese and the Christian German refugees; given consideration to the poverty-stricken sharecroppers in the South; raised its voice in protest against the persecution of the Jews; befriended the Negro race and other underprivileged groups, together with many impressive causes too numerous to catalogue here. Racial and religious minorities under stress and sorrow have turned in childlike trust to this Council for friendly assistance. Alas, not all of these appeals could be answered, but there is no small satisfaction be derived from the fact that in the eyes of a multitude of unfortunates the Council is regarded as a benefactor and the shadow of a mighty rock in time of storm.

The Council has never failed to protest against the “suppression of freedom”; issued calls for prayer and repentance when the cries of the persecuted, the homeless, and the suffering filled the earth. In short, the Council has held its approval from no good cause, no matter how unpopular or
how certain it was to draw the fire of captious critics.

To sin by silence, when we should protest,
Makes cowards out of men. The human race
Has climbed on protest. Had no voice been raised
Against injustice, ignorance, and lust,
The inquisition yet would serve the law,
And guillotines decide our least disputes.
The few who dare must speak and speak again
To right the wrongs of many.  [From “Protest” by Ella Wheeler Wilcox]

If there is any one thing on which the Council’s constituency has an acute conscience, it is the dreadful scourge of war. In recent months, when European events have seemed to make war imminent, a stream of letters and telegrams have poured into the headquarters of the Council and to the President in person, pleading for action of some kind in solemn protest against the militaristic spirit. On one occasion a delegation composed of two Quakers, a Mennonite, and two members of the Church of the Brethren—all five occupying places of influence in their respective communions—journeyed several hundred miles to Detroit and spent a half a day with me in discussing the Federal Council as a peacemaker and promising their undivided support.

The Council sponsored the National Preaching Mission, which reached a face-to-face audience of two millions, brought together 20,000 preachers in seminars and various meetings, fanned the flames of evangelistic fervor and sent out over the land more than sixty preachers of the everlasting Gospel, representing Lutherans, Congregationalists, Methodists, Disciples, Episcopalians, Baptists, Friends, Presbyterians, and others. The contribution of this preaching crusade to the reunion of the divided House of God was luminous and valuable beyond computation.

Speaking of Christian Unity, when Adoniram Judson has been at his missionary task in Burma for several years, he was asked as to the prospects. His answer is a notable specimen of apostolic optimism. “They are bright as the promises of God,” he replied. This is my answer to the question, “What are the prospects for Christian Unity?” They were never brighter than now. We are at the beginning of the age of reunion among the churches. This is a day of adventuring in cooperative Christianity on a grand scale. The spirit of unity is expanding. The ecumenical mind is more and more in evidence. The prayer of Jesus for the oneness of all who believe in Him is being answered in the lives of myriads of His followers. Christian Unity is on the march.

One good reason for these expanding horizons of unity is the conception of the Church that is beginning to dawn upon us. Western Protestantism has had much to say about “the churches” but very little about “The Church” until recently. We have taken it for granted that separatism is a virtue and that a denominationalized Christendom, while deplorable, was a necessity. And much of our discouragement has been due to the fact that we have kept steadily in our minds this fragmentary view of organized Christianity rather than the noble conception of one Church, visible and indivisible, growing up “in all things unto Him who is the head, even Christ; from whom all the body fitly framed and knit together through that which every joint supplieth, according to the working in due measure of each several part, maketh the increase of the body into the building up of itself in love.”

In the past the churches have raised up generations of communicants familiar with denominational lore and denominational heroes. This is good as far as it goes, but it stops too soon. It is a partial and not an ecumenical view; it is a partisan and not a catholic conception of the Church. What a magnificent achievement it is to permeate every phrase of congregational life with the spirit of reunion and to keep before the youth of the Church the unanswered prayer of Jesus for the oneness of His followers, together with the inspiring stories of the apostles of unity, the men who caught this vision splendid and became flaming prophets of a reunited Christendom, the names of a Bishop Brent, a Peter Ainslie, an S. Parkes Cadman, and if may be permitted to mention at least one contemporary, that ambassador of reunion, E. Stanley Jones.

The presidency of the Federal Council has inspired me to believe that its best and most fruitful years are yet to come. As a servant of cooperative Christianity it is a growing in power, influence, and appreciation. It is not a hierarchy; it has no desire to lord it over anything or anybody. It is responsible to its constituency; and for the Church’s sake, the Federal Council must continue to lead, to dream, and to prophesy. Nobody can tell just how the reunion of the churches will come about. No one is prepared to offer a blue print and say, “This is the way, walk ye in it.” Five kindred proposals for uniting the American churches have been recommended. They have bee effectively analyzed by Dr. H. Paul Dougglass, Secretary of the Commission and director of the same. These various plans will have their day in court and eventually the people of the churches themselves will have opportunity to pass on them. In the meantime, this new consciousness that is developing among us with regard to the Church, and the passion for reunion which it is inspiring, will measurable prepare us for the next great awakening.

Friends of the Federal Council of Churches of Christ in America, we are surrounded by a great cloud of witnesses. Thirty years of history speak to us. The enemies of the life of the Spirit are pounding at the gates of our citadel fling down the gauntlet, challenging us to live and die in defense of the priceless blood-bought heritage that is ours. The spirits of Bishop Hendrix, Frank Mason North, and Dr. Cadman brood over us tonight, and inspire us to achievements more vital and far-reaching than we have hitherto deemed possible. This broken world pleads with us for all those unifying ministries that heal and help and save. How fitting that we should pray tonight with one of the younger churchwomen of the land, Miss Susan Chiles of Missouri:

“O let us be no small protesting group,
Asserting our beliefs in negatives:
But rather let us say, in positive words,
That we do strive to emulate the Christ.
When we go in God’s house, may we not stop
To ask the one who kneels by us h ow he
Got in, but rather raise our voice with his
In psalms of praise for benefits received,
Or in petition for unfortunates
Who never found an open door at all:
Or, in calm quiet, wait to hear God’s plan
And get a measure of his strength for ours.
Then let us open wide the catholic doors
Of a great and a united Christian church
Whose ideal is the life of Jesus Christ,
And say, ‘Whosoever will, may come.’”