So, You Want a King! - A Lectionary Reflection for Pentecost 3B (1 Samuel 8) 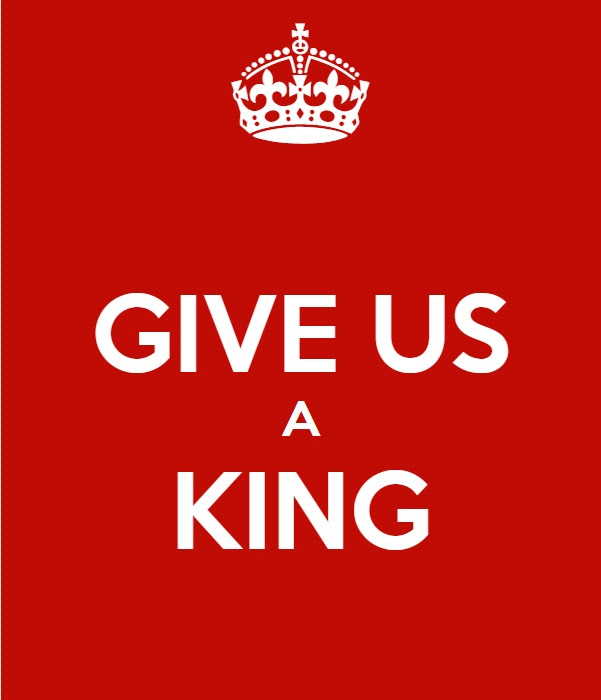 4 Then all the elders of Israel gathered together and came to Samuel at Ramah, 5 and said to him, “You are old and your sons do not follow in your ways; appoint for us, then, a king to govern us, like other nations.” 6 But the thing displeased Samuel when they said, “Give us a king to govern us.” Samuel prayed to the Lord, 7 and the Lord said to Samuel, “Listen to the voice of the people in all that they say to you; for they have not rejected you, but they have rejected me from being king over them. 8 Just as they have done to me, from the day I brought them up out of Egypt to this day, forsaking me and serving other gods, so also they are doing to you. 9 Now then, listen to their voice; only—you shall solemnly warn them, and show them the ways of the king who shall reign over them.”

10 So Samuel reported all the words of the Lord to the people who were asking him for a king. 11 He said, “These will be the ways of the king who will reign over you: he will take your sons and appoint them to his chariots and to be his horsemen, and to run before his chariots; 12 and he will appoint for himself commanders of thousands and commanders of fifties, and some to plow his ground and to reap his harvest, and to make his implements of war and the equipment of his chariots. 13 He will take your daughters to be perfumers and cooks and bakers. 14 He will take the best of your fields and vineyards and olive orchards and give them to his courtiers. 15 He will take one-tenth of your grain and of your vineyards and give it to his officers and his courtiers. 16 He will take your male and female slaves, and the best of your cattle and donkeys, and put them to his work. 17 He will take one-tenth of your flocks, and you shall be his slaves. 18 And in that day you will cry out because of your king, whom you have chosen for yourselves; but the Lord will not answer you in that day.”

19 But the people refused to listen to the voice of Samuel; they said, “No! but we are determined to have a king over us, 20 so that we also may be like other nations, and that our king may govern us and go out before us and fight our battles.”

The prophetic call came to Samuel when he was a child. It was during the priesthood of Eli, and according to the narrative, Eli was old, ineffective, and his sons were untrustworthy (1 Samuel 3). Now, we move decades into the future. Samuel is now the one who is old. He’s still considered wise and trustworthy, but the same cannot be said for his sons.  Facing the prospect of the instability of an unknown future, to people decide it’s time for a change in political systems. What existed was the leadership of Judges, those charismatic leaders who emerged during times of trouble to lead the people. Samuel is but the most recent of these figures. That system which waits for God to provide a leader at the right time didn’t provide the stability that the people craved. The world around them was dangerous. They felt the need for a stronger leader; a military leader who could defend them and their lands against the encroachments of neighboring peoples. Since their neighbors had kings, why couldn’t they have a king? After all, the neighbors seemed to be in a better position militarily than was true for them. Why get beat up, when you could have a king to fight your battles for you.

The request made of Samuel, that he provide them with a king, didn’t sit well with him. Perhaps there was a bit of sour grapes here, but he felt the need to bring his concerns to God. He seems to feel as if his leadership was being rejected, but then maybe he should have seen it coming. After all, his predecessor was rejected because own sons weren’t prepared to lead the nation. The same seems to be true of Samuel. The question raised here, however, concerns whether monarchy is the course of action? More specifically, what does this request say about the people’s view of the covenant relationship that Yahweh had established with them?

When Samuel takes his concerns to God, Yahweh tells Samuel that the people aren’t really rejecting Samuel as their leader, what they’re rejecting is God’s kingship. This doesn’t mean they were opting for a separation of church and state. The ancient peoples didn’t separate secular from sacred. Kingship was just as sacred as priesthood. Often these ancient monarchs were understood to have their own sense of divinity. Asking for a king could be seen as a transfer of loyalty from one God to another, with the king being a rival deity. Thus, by rejecting Samuel, the people were perhaps looking for a new deity. While Samuel isn’t happy, nor apparently God either, God tells Samuel to do as the people request. They want a king, then give them a king. However, let them know what this means. Warn them and witness against them. They think this will make things better, but it’s not true. The people will essentially place themselves in a position of slavery, something that Yahweh had rescued them from. In other words, by asking for a king, they were asking for Pharaoh.

God sends Samuel to the people with a lengthy warning. It is clear that the point of having a king is to have a military form of government. Watch out, Samuel informs the people. The king will build a standing army by drafting your young men to drive the king’s chariots and horses. There will be commanders of troops established. Not only will there be soldiers in the service of the king, but the king will need people to tend his fields and make instruments of war. Not only will the king require the services of the young men, but the women as well who will serve as perfumers, cooks, and bakers. As Mel Brooks’ character declares in History of the World Part One, “it’s good to be the king.” You can also hear echoes of President Dwight D. Eisenhower’s warning about the “military industrial complex.” As we know, the “Defense” budget is the largest component of our nation’s governmental expenditures.

Turning back to 1 Samuel, it is good to remember that it was written after the Exile. It was written from the perspective of a people who had experienced monarchy. While some of the kings were good, like Hezekiah and Josiah, but most were not wise or good. While we often think of Solomon as a great and wise king, it’s good to remember that the kingdom broke into two parts after his death, in large part due to the excesses of his rule. Perhaps he was not as wise as has been advertised. Stephen Chapman makes this point:

Here again it is likely that Samuel’s speech reflects Israel’s experience in later history. Not only were the excesses described by Samuel typical of subsequent Israelite kings, the same royal offenses were later viewed as responsible for the eventual downfall of both the monarchy and the Israelite nation. After the Exile, even after they had returned to their land, the Israelites continued to perceive themselves as “slaves” (Ezra 9:8-9; Neh. 9:36), a situation attributed to the errant leadership of the kings and other leaders within pre-exilic, society: “Even when they were in their own kingdom . . . they did not serve you” (Neh. 9:34-35). [Stephen Chapman, 1Samuel as Christian Scripture, 99].

The message to the returning Exiles is simple. Having a king isn’t all that it was cracked up to be. In exchange for protection you gave up your freedom. Was it worth it?

Ultimately, as Chapman notes, Scripture doesn’t demonize monarchy, but it does point out the challenges. There are always trade offs when it comes to government. The charismatic leadership of the period of the Judges was not without its challenges. At least with the monarchy there was a sense of stability. Yet, there is also the reminder that this arrangement is not God’s best. It is simply the reality we live with.

Living as we do in a time of political instability in the United States and elsewhere; at a time when authoritarianism is raising its head in our midst, what lesson do we glean? There are those in our midst—religious folk—who have put their hopes in the hands of a man who has demonstrated few qualities one would deem Christian. In the past, a person like the current President would have been rejected by those who now hail him as their protector. As we consider this passage, what might 1 Samuel tell us about putting our hopes in authoritarian leaders?

A passage like this could serve as a reminder that as the people of God we are called upon to put our allegiance not in a human leader, whether monarch or president, but in God. The request for a king will lead to the call of Saul, a man who looks good on the outside, but who ultimately fails to fulfill his potential. While not demonizing the monarchy, or any governmental system, the passage does remind us that privilege often comes with office, and that privilege often comes at a cost, even in a democracy. Nonetheless, after Samuel bears witness to the dangers of monarchy, the people remain unswayed. They’re quite clear as to what they want, and they let Samuel what it is they want: “No! but we are determined to have a king over us, so that we also may be like other nations, and that our king may govern us and go out before us and fight our battles.” People want to get on with their lives. They want a ruler to tell them what to do and then go out and fight their battles. It would seem to me that little has changed over the millennia.

As we consider this reading, what might it say to us about our current situation and the realm of God. What does it say about allegiance?

Edet said…
Always good to discover another Christian who is doing a great work for the LORD and His Kingdom. Be blessed. https://www.purityposts.com