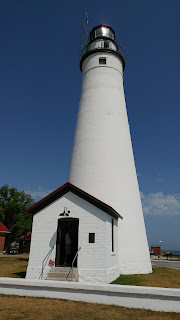 Every day we hear about "fake news." The President denounces it, even as he broadcasts it in tweets and speeches. Apparently he believes that if he tells enough untruths, we''ll start believing them. He may be right, as millions of Americans have embraced his "version" of the truth. Of course, there are those on the other side of the equation who seem enchanted with their own sets of untruths, which only compounds the situation.

Fake news isn't new, but it is reaching epidemic proportions. It's not surprising that we find difficult to tell fact from fiction, especially as we peruse social media. It's easy to read a juicy headline that confirms our biases and then simply share. Again sharing of such things is not new. There have been tabloids for decades and 19th century newspapers were notorious for shading the news. But technology has exacerbated the problem.

The Bible has much to say about truth. I put the word truth into my Bible Gateway search and  came up with a multitude of choices. I think this word from Proverbs 12 is worth hearing:

The word truth (Gk. aletheian) appears  twenty-one times in the Gospel of John. Most famously we hear the word on the lips of Pilate, who asks of Jesus: "What is Truth?" He asks the question after Jesus tells him that he came into the world to testify to the truth. (John 18:37-38)

So, what is truth? This question has become increasingly difficult to answer. In part this is due to a move from modern to postmodern worldviews. There is a sense in which truth is a social construct. It is perspectival. Your perspective might be different from mine, and that is okay.There is much about the postmodern move that I appreciate. It has allowed us to hear voices that were previously shut out, because truth was seen as monolithic. As a person of faith, the postmodern move opened up space for religious conversation. Science, as valuable as it is, doesn't have all the answers. Yet, it seems as if postmodernism has gone awry in recent years.

Pilate asks a good question, without perhaps meaning to. What is truth? This is a question we need wrestle with, or we will run aground. When we speak of truth, we're not only thinking in binary terms. This isn't the place for Joe Friday and his demand for "just the facts." Facts are interpreted. Here is where things get tricky --- not all interpretations are equally true. We can't make up facts. We can't offer outlandish alternatives and suggest they are equally true. So, for the good of our nation (if you're an American) and for professions of faith, let us take greater care to pursue truth, wherever it leads. That starts with refusing to follow or share fake news. That starts with checking your sources.

As the Gospel of John records, Jesus declared: "You will know the truth, and the truth will set you free." (John 8:31-32).
Email Post
Labels: Fake News Modernism Perspectives Postmodernism Proverbs Truth