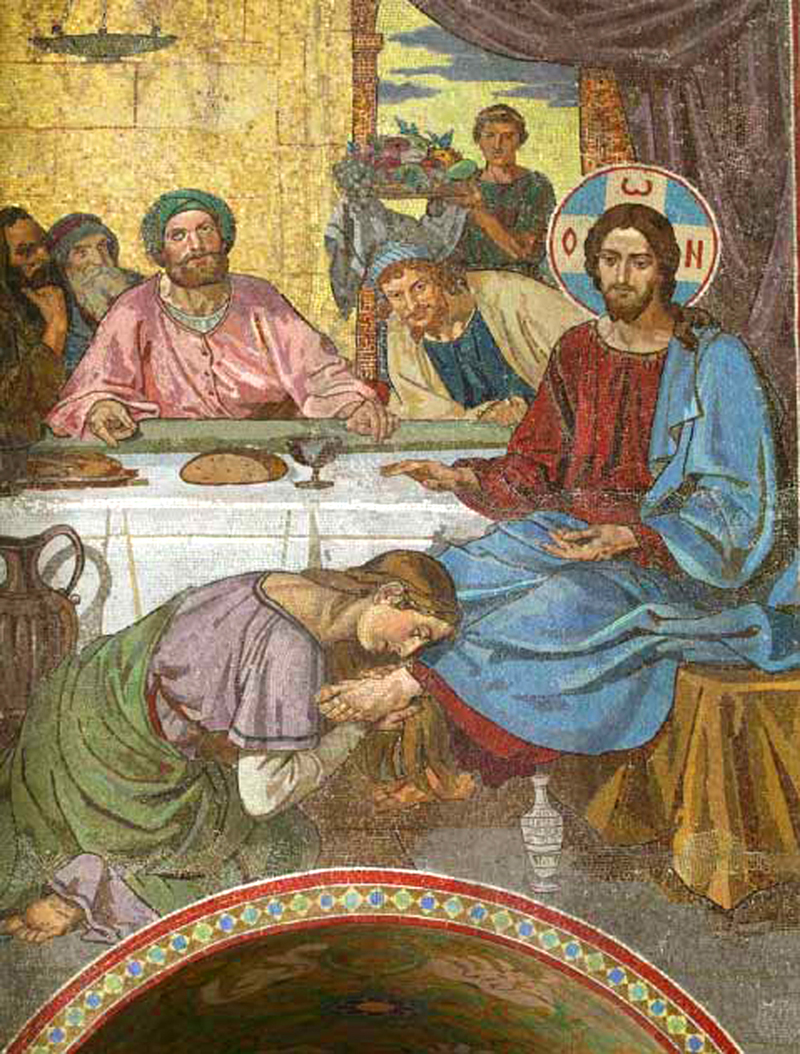 
The Fourth of July holiday celebrates freedom, but freedom can come in forms that have nothing to do with where you live. Sometimes freedom is internal, which is the case in the story we’ve heard today. It’s a story about a woman who lived in a certain town, who heard that Jesus was having dinner at the home of a wealthy and influential man named Simon. She decided to crash the party.

We need to use our imaginations to picture the scene. Simon and his guests would have been lying on cushions, with their feet toward the wall and the tables probably laid out in an u-shape in front of them. The woman, whose name Luke doesn’t reveal, slipped in unnoticed. She stood at the feet of Jesus and began to weep. When her tears fell on his dusty feet, she knelt down, loosened her hair, and began to wipe the wetness of her tears from his feet. Then she kissed them. Finally, in an act of great sacrifice, she broke open an alabaster jar of ointment and began to anoint his feet.

If we had been in the room, we would have heard lots of gasps and whispers. We would have heard Simon mumbling under his breath “If this man were a prophet he would have known . . . she is a sinner.” Luke doesn’t tell us the nature of her sins, but it seems that she was well known in the community. There have been lots of suggestions as to the nature of her sins, but they’re merely rumors. What is true is that she was bound up by shame. Good upstanding citizens like Simon made her feel like a nobody, so, when she entered that room, she had nothing to lose and everything to gain.

I think we’ve all experienced shame at some point. It might not be to the degree that this woman experienced, but we’ve experienced it. It could have been the time we gave the wrong answer in class and everyone laughed. Or, maybe it was a case of striking out with the bases loaded. Or, maybe it involved asking someone out and hearing a firm no. Growing up can be difficult and a lot of shame can accrue to us. But it doesn’t end in high school! These may seem like little things, but if only someone could free us from the shame, wouldn’t that be wonderful?

Getting back to the story, everyone was scandalized by Jesus’ behavior, but he turned it to his advantage. He told a brief parable about two people who were forgiven debts. One had a large debt and the other a small one. The lender forgave both debts, setting them free from their obligations. Jesus then asked Simon: whom do you think was more grateful? Who had a greater love for the one who forgave the debts? Simon, perhaps reluctantly, told him that it was the one who owed the most.

Then Jesus pointed to the woman whom the community believed was a shameful sinner and turned the tables on his rather self-righteous host. He said to Simon, “I entered your house,” and while you didn’t give me water for my feet, she washed my feet with her tears. You didn’t give me the customary kiss, but she kissed my feet. You didn’t anoint my head, but she anointed my feet. Then Jesus said, her sins, which are many, are forgiven. With this word of forgiveness, Jesus lifted her shame. He removed the burdens placed on her by the community. He set her free so she could go forth in peace.

But, what about Simon? He didn’t think of himself as a sinner or in need of forgiveness, but in his failure to show respect for Jesus he failed to love his neighbor and demonstrated that he too was a sinner in need of God’s forgiveness. The question is, would he stay bound in his sins or receive the freedom that comes with forgiveness.

As we gather here in this circle this morning, Jesus invites us to answer the question: Who am I in this story? Am I Simon? Am I the woman? Am I the other guests who are scandalized by what took place? Have I been forgiven much? Do I love much? Or, do I feel like Simon who doesn’t know he needs forgiveness? Do I love much or little? Yes, where do we fit in the story?

I think the woman already knew she was forgiven. She just came to say thank you. Her actions were signs of gratitude and love because Jesus already had set her free. Here is how Jan Holton interprets the story:  “A heart that is bound by sin and shame withers and dies, but the love of a forgiving God lifts it to heights beyond our greatest dreams and causes it to sing with gratitude.” [Feasting on the Word, p. 144]. May we sing with grateful hearts “Amazing grace, how sweet the sound, that saved a wretch like me.”