The First Christmas -- A Review 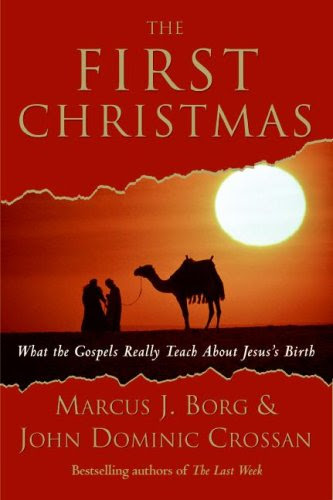 Marcus J. Borg and John Dominic Crossan. The First Christmas: What the Gospels Really Teach About Jesus’ Birth. San Francisco: HarperOne, 2007. x + 259 pp.
In the popular mind the Christmas story as symbolized by the crèche involves Joseph, Mary, and the little baby Jesus lying in a manger (feeding trough), surrounded on one side by shepherds and by three kings on the other. Of course there are the requisite barnyard animals standing around like movie extras. Above this scene flies the tiny cherubic angel. That such a scene is at best a conflation of the gospel texts doesn’t seem to matter. It is what we think Christmas is about.

Marcus Borg and John Dominic Crossan offer to the general reader a different reading of the Christmas story, one that is rooted in their earlier works on Jesus. In fact, if you’ve been reading any of their recent books you will hear strong echoes (especially of Crossan’s God and Empire -- HarperSanFrancisco, 2007). A companion piece to their earlier – and in many ways stronger – The Last Week (HarperSanFrancisco, 2005), Borg and Crossan offer a “parabolic reading” of the two Christmas stories (infancy narratives). They use the term parable here as an alternative to factual and fable – the two usual understandings of these two overlapping but in so many ways very different stories of Jesus’ birth. Factualism focuses on historical veracity, while fable implies that these are simply fairy tales that can be easily dispensed with. By speaking of them as parables, they suggest that the focus is not on factuality (which for the most part they discount) but on the meaning of the stories. And meaning they do have. Indeed, these are by their very nature subversive stories – subversive in that they challenge the reigning paradigm (Herod is “King of the Jews” and that Caesar is “Son of God” and Savior and Light of the World.

The authors speak of the infancy narratives as “parabolic overtures,” by which they mean that the first two chapters of Matthew and Luke (the only two canonical infancy stories) contain in miniature the full gospel story. In this retelling of the story of Jesus, we discover the parallels and the contrasts. In many ways Matthew portrays Jesus as the New Moses – the new law giver, for like Moses Jesus is rescued from the murderous king. In Matthew Jesus goes down to Egypt to escape Herod’s wrath; in Exodus Moses leads the people out of Egypt. But in both cases the lead actor is spared so as to save his people from the hand of the tyrant. Luke on the other hand, sees Jesus in contrast to Caesar Augustus, who also is acclaimed as son of God (Apollo) and Savior. We also see in these first two chapters many of the emphases of Luke’s gospel – his emphasis on women (Mary, Elizabeth, and Anna figure prominently), an emphasis on the poor and the marginalized (the shepherds), and on the Holy Spirit.

Central to understanding these stories is their historical context – both their Jewish and their Roman context. Thus imperialism figures prominently (see Crossan’s God & Empire). This is a story of contrasting kingdoms – that of Rome and that of God. Both promise peace, but one is byway of victory (violence) and the other through justice (non-violence). As such it is also the story of messianic expectations – the belief that a son of David would one day appear.

Part two of the book moves from contextual issues to the deeper issues inherent in the stories – the genealogies, which are themselves parabolic, the visitation by angels, birth in Bethlehem. Each of these aspects of the story is more theological than historical and is meant to cement the messianic role of Jesus. Again, the contrast here has political and subversive connotations – although Matthew and Luke have different audiences in mind.

Finally, in part three we come to the theological reflections – three images: Light, fulfillment, joy. Whether it is the star guiding the magi to Bethlehem or the glories of heaven that fill the sky when the angels appear to the shepherds, light is a central theme, and at the heart of this usage is the belief that Jesus is the light to the nations/gentiles. Jesus is also fulfillment of the Old Testament. In Matthew it is a prediction-fulfillment formula, whereas in Luke it is more thematic – echoes and reflections in hymns such as the Magnficat where Old Testament language and themes resonate. And finally, as the hymn so resplendently proclaims – the Christmas story is about “Joy to the World.”

As one might expect from a book by these two authors, the focus is not on fact but on meaning, with the political implications being paramount. Both writers are concerned that the gospels be seen as a word of warning and a word of hope to a world that is in danger of self-destructing. It is a warning about the dangers of imperialism – whether Roman or American. Most of all it is an attempt to reach out to the lay person – Christian or not. Clergy and scholars will find little that is new here, but this will prove to be useful fodder for even the well informed about scholarly trends.

Whether one agrees with all that is here, the tone is to be appreciated. The love that these men have for the stories is in evidence. Even when they “demythologize” the stories and reveal the fictional side, they don’t do so gloatingly, but with a view to helping people better appreciate the meaning of the stories. In this, one hopes they will be successful.

Mystical Seeker said…
That was a very good (and thorough) summary of the book.

As you might gather, I liked this book quite a bit. I agree with you that the book echoes Crossan's "God & Empire" quite a bit. I was trying to play a game with myself to figure out which parts seemed to be written mostly by Crossan and which by Borg. My guess is that Part II, which echoes so strongly "God & Empire" was mostly written by Crossan.
10:47 PM

Robert Cornwall said…
No surprise -- indeed! I've read your thoughts on the book. Having read God and Empire more recently than Borg's Jesus, it was Crossan's contributions that stood out more. And the whole discussion of empire is definitely a sign of Crossan's contributions. My sense is that he played a stronger role in this book than Borg, but that may be reading more into this than is there.

I'm curious, though, how would you compare this with "The Last Week," which I felt was a much stronger book.
1:33 PM

Mystical Seeker said…
You know, it's been about a year or so since I read "The Last Week", and a lot of it is a blur to me now. I think I'd have to reread it to make a fair comparison.

I agree that Crossan seems to be the major influence on "The First Christmas." I thought maybe the chapter on "light" might have been more Borg than Crossan.

Robert Cornwall said…
I've heard that McCartney has asked to have hisname placed first on those songs -- like Yesterday -- of which he was the primary author. Apparently the Lennon estate won't go for it.

The question now is -- does the order in which the names are listed indicate primary authorship? Is it alphabetical -- Borg before Crossan? How do they decide.
3:47 PM

Mike L. said…
I enjoyed this book also, but I felt "the last week" was a better read. This one felt a bit forced to follow up the other which will surely be a classic.

I met both Borg and Crossan last January right after Borg introduced Crossan as a surprise speaker at the January adventure conference. I asked Borg if he felt like a magician who had just revealed his secrets (by having Crossan speak in his place). Borg acknowledged the impact Crossan has been on his own career. Both of these guys have been vital to my understanding of Jesus. Crossan is daring and bold while Borg has a wonderful gift for clear communication. They make a great team.

I do think this particular book is a great introduction to the depth of exegesis that Crossan developed in "God and Empire".
9:50 PM

Term Papers said…
Wonderful article, very well explained. i glad to see this blog, such an informative article, Thanks for share this.

Term papers said…
Thanks for this fabulous information. This really helps, i've been looking for this kind of info hub on this issue for a long time now and for sure this one is great.
8:29 AM