Christianity by Jonathan Hill: A Review 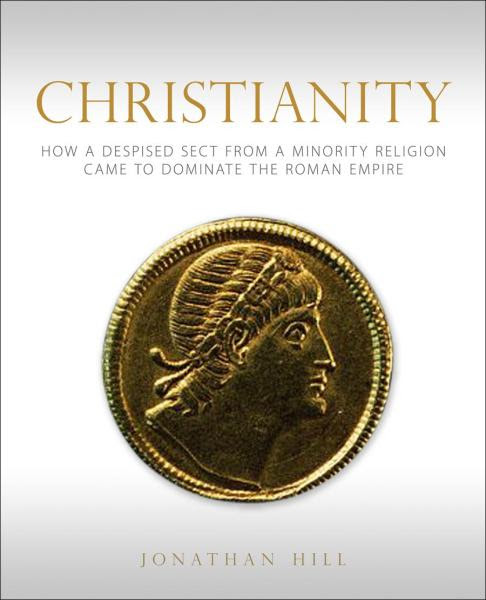 CHRISTIANITY: How a Despised Sect from a Minority Religion Came to Dominate the Roman Empire.

Christianity is the largest religion in the world, extending its reach to every continent and almost every nation in the world. Only Islam challenges its dominance, and Islam is six centuries younger. Christianity itself is a religion that emerged out of what at the time of its birth a small, ethnically based, and much despised religion – not the kind of origins one would expect for a religion that would come to dominate the world scene. It would take nearly four centuries for this faith to overcome its disadvantages – and the expected deviations from the “norm” – for it to gain not just respectability but imperial favor. Such is the story that Jonathan Hill, a Christian author and editor with a Ph.D. from the University of Singapore, tells in this attractive, coffee-table style history of Christianity that takes the story from its first century beginnings through the fourth century, when it came to dominate the Roman Empire.
A book such as Hill’s is quite welcome, for several reasons, foremost being its accessibility. Recently published books on the history of Christianity by Diarmaid McCulloch

are well written and accessible to the general reader, but this book is briefer in scope and has the added benefit of numerous color plates and illustrated maps that can are distributed generously throughout the book. In addition to the primary narrative, which is well written and in my estimation accurately presented (one might find something to quibble about on occasion, but since this is a broad presentation these are much fewer than what might find in a longer, more in depth, study), there are numerous sidebars that deal with such issues as the titles of Jesus, the identity of the Ebionites (a Jewish-Christian sect), the city of Alexandria (one of the leading intellectual and spiritual centers of the Christian faith), Gnostic movements, and the founding of the Armenian church. These relatively brief articles expand one’s understanding of stories that may not be as familiar to the general reader without distracting from the primary narrative.
As for the story itself, Hill begins his rendering thusly:

Christianity was founded by a group of fishermen and peasants from Galilee, a rural backwater in an unimportant region of the Roman Empire. They were the followers of a relatively minor wandering prophet who had died as a condemned criminal (p. 7).

There is nothing auspicious about these roots, and yet, as he also reminds us – three centuries later this despised sect had become the official religion of the mightiest empire to that point in world history. From that point on, Christianity would extend east and west and come to dominate the western European world. Over the course of time this Palestinian sect would grow, divide, evolve, and adapt.
The book is composed of three parts, the first of which focuses on the story of Jesus, the founding of Christianity in its first century context. This is handled briefly, for this part of the story is relatively well known. Chapters four through seven take the story through the second and third centuries, centuries when the church expanded east and west, adapted to new environments, organized itself, wrestled with alternative renditions (dare we call these heterodoxies), and began to define what would become normative Christian theology and practice. The final four chapters tell the story of the fourth century CE expansion of Christianity in the aftermath of Constantine’s embrace of the faith. Though Christianity would no longer be proscribed and persecuted, its troubles weren’t over. All manner of divisions and separations and alternative understandings emerged, from the Arians to the Donatists.
The value of this book, besides the fact that it is told in an interesting and colorful manner is that it helps the one who is unfamiliar with the story, or has heard parts of the story, understand that the story of Christianity is rather complex. There are no real heroes and villains, only real human beings trying to make sense of the message of Jesus in a constantly changing matrix.
For the first several centuries survival was the central focus, while in the fourth century it was a question of adapting to the new found freedoms. We may know the story of Nicaea, but rather than settling once and for all the debate about both the doctrines of the Trinity and Christ’s divinity, it was simply the beginning of a century long back and forth debate. Even when one issue seemed to be settled another one would emerge. In addition after Constantine’s embrace the church had to wrestle with this new freedom, especially since the very fact that it was favored by the government meant that many persons entered the community with less than perfect motives. Thus, we see the development and spread of monasticism as a means of preserving the more strenuous forms of faith that existed during times of persecution. Donatism was another rigorist response to concerns that some church leaders may have succumbed to the threats of persecution, denying the faith in order to survive, but now they were back leading the church. The Donatists believed that this threatened the spiritual integrity of the church and separated themselves from those who were connected with the less rigorous Christians. Augustine response suggested that the validity of ordinations and sacraments rested in the promises of God and not the holiness of those who held church office. Oh, and Nicaea – the concerns raised in 325 weren’t really settled until Theodosius called another council at Constantinople in 381, when the Athanasian position finally won out over its rivals. But as I said, that only resolved part of the problem – the divinity of Christ, now the church would face the question of how Jesus could be both divine and human!
The professionally trained historian might not find much that is “new” here, and those seeking a sensationalist reading of Christian history might be disappointed by what they find here, but those persons seeking a solid and well presented telling of the story will find much to like here. In fact, this is the kind of book we need to have available so that the sensationalist renderings might lose their attractiveness. In that light, I was impressed by the generous manner of this presentation. The author is a Christian, perhaps even an evangelical, but even Arius is treated with a degree of respect and Athanasius’ darker side is presented. Constantine comes across neither as saint nor monster, and the pagan Julian is depicted in as generous tones as can be expected. So, if you want to know how the story of Christianity began, this is a good place to start.
(review copy provided by publicist)
Article first published as Book Review: Christianity: How a Tiny Sect from a Despised Religon Came to Dominate the Roman Empire by Jonathan Hill on Blogcritics.

Anonymous said…
I was wondering if you ever thought of changing the page layout of
your site? Its very well written; I love what youve got to say.
But maybe you could a little more in the way of content so
people could connect with it better. Youve got an awful
lot of text for only having 1 or two images. Maybe
you could space it out better?
7:22 PM

Robert Cornwall said…
Yes, I've thought about better ways of laying this out. I do understand that these can be wordy. To this point, I haven't figured out how to do this! I'm more a writer than a lay out person. But will continue thinking about this.
7:53 PM