The Politics of Religion and Regionalism on the Supreme Courts -- Sightings 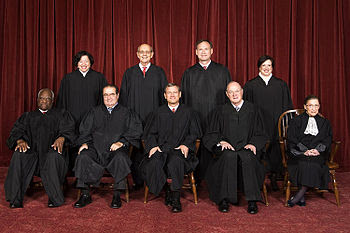 As a little break from the Christmas focused posts that preceded this and will succeed it the next few days, we have a posting from Sightings that looks at the question of religion and regionalism on Supreme Courts by comparing the US Supreme Court with that of our neighbor to the north -- though I have to note that in metro Detroit we can speak of our neighbor to the south.   I remember the conversation at the time that Justice Stevens left the court, removing the last Protestant from the court.  How interesting that was -- to think of a nation that had until recently a WASPish tenor had become so different.  So take a read, ponder the implications of this change, the importance of religious diversity on the courts, and consider the future!
Oh, and Happy Holidays!
*******************************

Last year when Justice John Paul Stevens retired from the Supreme Court and was replaced by Justice Elena Kagan, it provoked some concern over the religious and regional backgrounds of the members who served on the nation’s top bench. With six Catholics and three Jews, it marked the first time in American history when no Protestants held a seat. And no less than four sitting justices hailed from New York City alone (Scalia, Ginsburg, Sotomayor, and Kagan are from Queens, Brooklyn, the Bronx, and Manhattan respectively). The discussions over the religious and regional background of justices, however, have now largely subsided or been summarily dismissed. The notion of the Protestant seat that could somehow represent the varieties of Protestantism in America was as fanciful as the notion of an essential New Yorker who could not grasp legal issues beyond her city-limits.
The politics of religion and regionalism, however, took on new life from a different angle in the Canadian context. When Justices Andromache Karakatsanis and Michael Moldaver were sworn in on November 14, 2011 to the Supreme Court of Canada, it signalled both deep continuity and significant change within its history. By law, at least three members of the Court are required to be from Quebec; by convention, an additional three are from Ontario and three more are from other provinces. The apportionment of seats along strict regional lines is rooted in the historical origins and conception of the Canadian Confederation and the aspiration to form a federalism that respected and recognized the distinctiveness and particularities of regional identities. Indeed, the fear of alienating regions and provinces was so acute in those early days that it even led some to suggest that the Court travel around the new country to hear proceedings. That both newly appointed justices, then, hailed from Ontario and that they were replacing seats which were vacated by justices from Ontario followed the time-honored traditions and customs of the Court to maintain regional diversity.
One of the consequences of the institutionalization of regional diversity on the Court was that it engendered both religious diversity and uniformity. On the one hand, as most Quebec justices were Catholic and most justices from the other provinces were Protestant, it created a kind of religious diversity that was unusual for its time. A seat vacated by a Catholic went to a Catholic and similarly a seat vacated by a Protestant went to a Protestant. It was not until 1924 when that custom changed, when Justice Abbott became the first Protestant from Quebec to serve on the Court. On the other hand, there was maintained a kind of ethnic and religious uniformity. For much of the Court’s history, justices were almost exclusively from a French or British background with at least a formal connection to a Christian religious group. It was not until 1970, when Bora Laskin was appointed, that a non-Christian took a seat on the Court. The appointments of Justice Karakatsanis, the first Greek Orthodox, and Justice Moldaver, a Jew, attest then to the changing religious diversity of the Court.
While the issue of religious and regional representation on the Supreme Court was symbolically important from its inception, for at stake was the very issue of federalism that has become further complicated in an increasingly multicultural society within the bilingual constitutional framework of Canada.  Perhaps the greatest testimony of this was when Karakatsanis used not only French and English in her swearing-in ceremony, but paid tribute to her cultural heritage in Greek.

Michael Sohn is a Ph.D. candidate in Religious Ethics at the University of Chicago Divinity School and a Martin Marty Junior Fellow for 2011-2012.  His dissertation is entitled The Good of Recognition: Phenomenology, Ethics, and Religion in the Thought of Levinas and Ricoeur.

Editor's Note: Sightings will break for the holidays and return after the New Year.