In light of the constant bickering over US immigration policy, which often shows little understanding of the culture and politics of those living south of the US border, Christoph Rosenmuller takes us into the interesting world of church-state relations in Mexico in this Sightings article.  Mexico is predominantly Roman Catholic, but almost from the beginning of colonial times the state has taken a primary role in determining what this Catholicism looked like and how it was practiced.  That is changing somewhat.  So, it's time to take a look at life to the south of the US border!
***************************
Sightings  12/15/2011
Church Bells in Tochimilco, Mexico:
An Old Feud Revisited
-- Christoph Rosenmüller 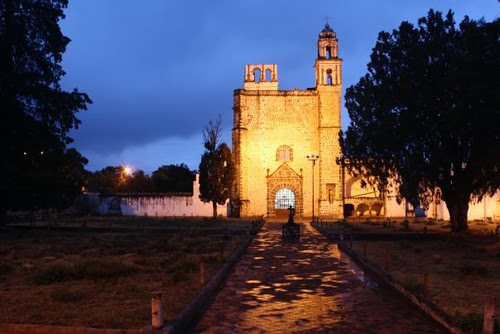 I spent a few weeks last summer in the Mexican town Tochimilco, a municipality (municipalidad) in the state of Puebla. Set to a breathtaking scene with the majestic Popocatepetl Volcano in the backdrop, this charming town boasts a former Franciscan monastery built in the sixteenth century. In this quaint town, which is about a four-hour bus ride from the bustling megalopolis Mexico City, the church bells ring every quarter of an hour. Every full hour the large loudspeakers mounted on Tochimilco's town hall broadcast secular tunes such as the canción mixteca, a song on the emigrants' plight. The chiming and broadcasting go on through the night. I found myself waking up at three in the morning to the sound of “Mexicans, at the Cry of War,” the stirring national anthem. The government makes an audible point that it has the right to keep its citizens apprised of important civic events and the time, and does not yield this to the Church. In some ways this is part of the long-standing rivalry between the secular and religious power dating back to at least the colonial times of New Spain, as Mexico was then known (1521–1821).

In 1508 the kings of Castile obtained the patronato, the right to appoint bishops and other important clerics in the Americas, thus expanding the royal influence over the Church there. In the mid-eighteenth century, the crown began evicting the friars from the indigenous parishes (Tochimilco in 1767), and in the first decade of the nineteenth century, the crown seized much of the Church wealth that was given as credit to debtors. In the nineteenth century, the Liberals issued the Reform Laws, establishing religious freedom, and wresting from the Church the civil registry as well as much of the remaining Church land. Finally, the Constitution of 1917, born out of the violent upheaval of the Mexican Revolution (1910–1917), decreed the nationalization of even the church buildings. In practice, however, the laws have been loosely applied in the past decades, so that the priests retain much control over the buildings.

In 2010 the PRI, the party of the Mexican Revolution, was voted out in the municipal elections of Tochimilco and replaced by the more Catholic-leaning PAN party. Local relations between the municipality and the Church became more amicable. The government turned down the volume of nightly broadcasts. Still, Tochimilco (in the native tongue Nahuatl: the place where the rabbits abound in the corn field) remains by all measures a Catholic town. A bordello was recently shut down, and the Protestants play only a minor role, if any, here, although they flourish in other towns of the area.

In the neighboring town Magdalena Yancuitlalpan (in Nahuatl: place of the new land), one of the few remaining Nahuatl-speaking communities in the area, several people insisted that their town was even more devout. A large sign over the church entrance implored the Virgin Mary to protect the town's offspring living in New Jersey. All Church services, including weddings and burials, are broadcast via loudspeakers. At noon Schubert's Ave Maria rings out, soon followed by announcements that fresh meat is sold at the stand next to the church. The temple uses the loudspeakers along with the auxiliary town hall (junta auxiliar). The community largely agrees to this arrangement, it seems, given its scarcer resources and the more traditional outlook. Even visitors from Mexico City find it remarkable that in times of electronic communication, which some inhabitants of the two towns use avidly, the loudspeakers still play such a commanding role.

In any case, the PRI on the national level emphasized the pre-Hispanic origins of Mexico and invested much in restoring the pyramids. In 2000, however, the PRI lost the presidency of the country to the PAN. The change fostered a greater political appreciation for the colonial arts and architecture that contributed much to the Hispanic and Catholic heritage of the country. The National Institute of Archeology and History (INAH) is busily restoring the colonial ex-cloisters. About a year ago, INAH finished its work on Tochimilco's Asunción de Nuestra Señora church. This imposing temple is a part of a chain of stunning monasteries in the foothills of Popocatepetl, which were added to the UNESCO World Heritage List. This shines a bright light on Mexico, especially considering all the bad news coming from the border. Now if they could just turn down the speakers a little bit at night…

Christoph Rosenmüller is associate professor in the History Department at Middle Tennessee State University. He is the author of Patrons, Partisans, and Palace Intrigues: The Court Society of Colonial Mexico, 1702–1710.

In this month’s Religion and Culture Web Forum, Emanuelle Burton’s “Whose Lion Is It, Anyway?” argues that scholarly commentary on C.S. Lewis’ Chronicles of Narnia is too dominated by the Christian academy; thus, it often fails to understand (or to serve) a major portion of the books’ audience: readers who are uninterested in, or even disturbed by, the Chronicles’ “parallels to the Christian salvation story.” Writes Burton, “Simply put, it is time for Narnia criticism to broaden its horizons: to acknowledge a wider array of readers, and to take seriously the question of what draws so many readers to the books without drawing them closer to Christianity.”