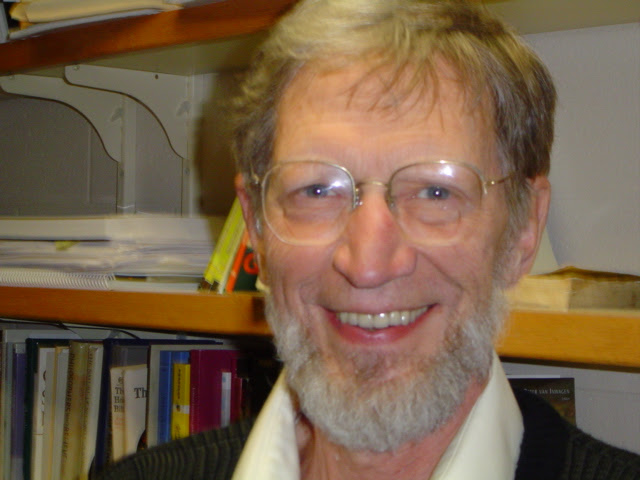 Chelsea Clinton, Hedy Lamarr, Shakespeare as author of Titus Andronicus (seen in the family of “torture-porn” art), and Damien Hirst, major-major painter of images ( “dead animals—sharks, zebras, piglets. . . and cigarette butts,” according to The New York Times), Alvin Plantinga and God share page one of The Arts section of the print edition of The New York Times on December 14. All but Plantinga are from genres and types that are regularly visible on such a page. God is familiar there but, in the nature of the case, is invisible. Plantinga is a Christian philosopher, of a caste not familiar there. What did Jennifer Schuessler and her editors find about Plantinga that “warranted” his being featured in unfamiliar media territory?
What was it about Plantinga that “warranted” his being featured in this Sightings, which too rarely discusses Analytical Philosophy with a Christian cast and focus? Speculate: could it be that after two recent columns on “atheism” we wanted to follow media habits and give “theism” equal time? Or after fifty weeks of “public religion” of noisy sorts, was it time for accent on the life of the mind, a way of celebrating sacred holidays in the secular mix? Or could it simply be that Plantinga and theism deserve such notice? Answer: mainly the last of these.
A few decades ago religious and Christian and contemporary Protestant-related philosophy were invisible in the prestigious American Philosophical Association. Then Plantinga, colleagues, students, and other “unapologetically Christian philosophers started raising questions, challenging with puzzles or paradoxes, and making a compelling case that theism has warrants—there’s that word again, so familiar for readers of books by Plantinga. Before long, decades ago, this Christian philosopher became president of the APA and, I’m told, a Christian philosophers’ caucus, outdrew the others.
Having said, a couple of weeks ago, that most Christians aren’t Christian because they can “prove the existence of God” and no atheists can “prove the non-existence of God,” I seemed to be slighting the efforts of Plantinga and others who employ contemporary methods of “doing” philosophy and then minister to those who have questions about the “warrants” for talking in philosophical terms about God. Plantinga knows his limits, but reasons on effectively, as he has done through a career at Calvin College and the University of Notre Dame, clearing debris from the minds of those who have been stunned by the atheist and anti-theist thinkers whom Plantinga and his school so reasonably counter.
Ms. Schuessler: “Mr. Plantinga readily admits that he has no proof that God exists. But he also thinks that doesn’t matter. Belief in God, he argues, is what philosophers call a basic belief. It is no more in need of proof than the belief that the past exists, or that other people have minds, or that one plus one equals two.” He takes his thoughts from there and soon reasons in a way that relates positively to Charles Darwin. Plantinga, at ease with both speaking and listening to non- and a- and anti-theists, convinces many that contemporary dismissals of theistic philosophy and Christian faith are not “warranted” in the ways that have crowded God off the agendas of philosophers and the public mind. (Is that one of the “other minds” of which Plantinga likes to speak?)
So, we enter into the record at year’s end this agenda item which urges serious people to pay attention to the case for Christian philosophy after its long exile from public discourse. As for more on themes like this: “See you next year.”

In this month’s Religion and Culture Web Forum, Emanuelle Burton’s “Whose Lion Is It, Anyway?” argues that scholarly commentary on C.S. Lewis’ Chronicles of Narnia is too dominated by the Christian academy; thus, it often fails to understand (or to serve) a major portion of the books’ audience: readers who are uninterested in, or even disturbed by, the Chronicles’ “parallels to the Christian salvation story.” Writes Burton, “Simply put, it is time for Narnia criticism to broaden its horizons: to acknowledge a wider array of readers, and to take seriously the question of what draws so many readers to the books without drawing them closer to Christianity.”