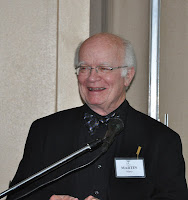 Senior Christian statesman Martin Marty is back writing his Sightings column, offering words of wisdom that we need to hear with regularity.  So, here we have his wry take on the recent hullabaloo over whether Jesus had a wife.  You may have heard the news -- there's a fragment of a supposed Coptic manuscript that features the words Jesus and wife, and thus the debate begins.  For many of us, this is really a non-issue.  The canonical texts don't speak of a wife, but what if he did?  Well, as Marty notes -- as with most things relating to Jesus' identity, this one will like fade into history as fast as it emerged, but for now it's a cause célèbre!

Vying for space and time on the religion-and-media front this week, in competition with presidential campaigns, Muslim extremist riots, and almost numberless other stirs, has been the attention given to a tiny piece of papyrus which includes the teeny words “Jesus” and “wife.” This text was pictured as being “hot off the press,” with only a four century pre-publication delay after the time of the occurrences to which it presumably referred. Four centuries from the implied wedding of Jesus to this “evidence” is the amount of time from the writing of the Mayflower Compact to our own.
There is little need to rehearse the controversy, so familiar has it become. The fact that well-recognized Harvard expert on Coptic Christian texts (and on more than that), Karen King took it seriously prompted other sober scholars to pay attention. We are told that her paper on the subject was one of some sixty delivered at a conference in Rome. The other 59 or so no doubt elicited yawns among many scholars of things Coptic and ancient Christianity in general, and suffered neglect by media. This one was different.
Why? Some commentators assumed that publicizing this would shake the faithful for whom the canonical gospels are unique sources. The usual suspects from the “New Atheist” front checked in, picturing that their suggestion that Jesus may have been married would score one against God and all that stuff. As mentioned, alert scholars of Coptic texts had good reason to be more alert than ever, and to be seen as relevant in the 21st century. Most of all, we heard and read that this piece of papyrus would cause defensive Catholics—and there are many--who argue for and insist on celibacy for clergy to find their fortress shattering. They would have to cry “uncle,” throw in the towel, and let feminists have their way.
We can put this kind of media event into perspective by noting that each such unearthing of non-canonical ancient Christian texts receives publicity in direct proportion to attention being given to particular controversial issues in the contemporary world. In the long perspective of Christian history of twenty centuries, my generation and I are virtual kids, with only a half-century of observation behind us. But we can see ancient textual interests and contemporary itches matching almost decade by decade.
Thus: when in the 1950s-plus “we” were seeking precedent for social justice on Christian fronts (count me in!), Jesus got pictured as an East Harlem Protestant social worker. Then came a time when best-sellers and their publicists proved that Jesus worked wonders because he and his followers were chewing mushrooms which gave them hallucinatory and thus divine-revelatory visions. Just in time to match the world of hippies and consciousness raisers. They came and went. Remember the Passover Plot? It had its moment in a time when such plotting mattered. Recall the books on “Jesus the Zealot,” based on discoveries from times of old to match the most radical Liberation Theology of our time? This dagger-carrying Jesus came and went.
Now the churches and the culture are hung up on sexual issues, and “Jesus-”and- “wife” prompts new obsessions. (Sexual issues won’t go away in any hurry, so the various celebrating factions can elaborate at leisure on this papyrus). But if the majority of Christian scholars don’t jettison all their other texts to embrace this one, we do not need to wonder. We and they might even yawn.

References
Rodrique Ngowi, “Jesus had a wife? Bible scholars question Harvard finding,” Associated Press, September 19, 2012.
----------
This month’s Religion & Culture Web Forum is “Discursive Formation around ‘Shinto’ in Colonial Korea” by Isomae Jun'ichi (International Research Center for Japanese Studies, Kyoto). "In the current discourse," Isomae Jun'ichi writes, "Shinto is usually categorized as a national religion.  The discourse of Shinto as the national religion, however, is a product of history; it became dominant only after the defeat of Japan in the Asian-Pacific War in 1945." In this month's Religion and Culture Web Forum, Isomae explores the late-19th and early-20th century discourse of Shinto "as a world religion," which discourse ultimately served to "legitimatize the invasion of Asia."  By recovering "the forgotten discourse of Shinto as a world religion," Isomae argues, "we have the opportunity to dislocate these dichotomous categories [of world and national religion] and investigate their contents." Read “Discursive Formation around 'Shinto' in Colonial Korea” here.
----------
Sightings comes from the Martin Marty Center for the Advanced Study of Religion at the University of Chicago Divinity School.