We're All in this Together -- A Lectionary Reflection 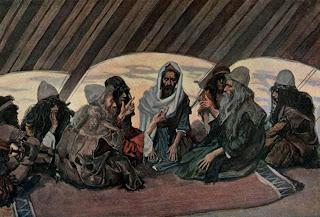 We’re All in this Together

This is clearly an individualistic age.  Especially in the United States, any hint of collectivism is cause for concern.  Sharing power and resources – the idea of redistribution – is difficult to affirm.  Americans have long lived with the elixir of individualism.  Indeed, my own denominational tradition is built on the premise of individual freedom to interpret and live out the biblical story.  As a pastor it’s easy to get caught up in the game of doing it all – you know, if I don’t do it, it won’t get done.  Now, individual initiative isn’t a bad thing.  The freedom to interpret isn’t a bad thing, but sometimes we forget our kinship with one another.  Sometimes we forget that there is power in relationships.

I’ve become more aware of the power of relationships in the course of becoming rather deeply involved in faith-based community organizing efforts.  One of the most important principles of community organizing is that power to change realities is rooted in relationships – in working together as coalitions of people and groups who share a common commitment to making the community stronger.    As Kendall Baker points out – in community organizing the point isn’t furthering a political agenda or even achieving success with a particular issue.

Rather, it is to develop an organization with the power of relationships that can act to make the larger community a more human place for all. An organizing principle: organizing is about people; people are about issues. Even when a particular organizing action does not meet all its objectives in moving an issue, it can still be considered a success. And that is because the primary goal is not to win, but to build a powerful organization.  [Kendall Clark Baker. When Faith Storms the Public Square: Mixing Religion and Politics through Community Organizing to Enhance our Democracy,

In the age of the individual, it’s easy for our faith journeys to take on the cast of individualism, to become focused only on our own spiritual realities and blessings.  While I understand why some embrace the idea of being “spiritual without being religious” – especially since religious institutions are often dysfunctional and fail to live up to their own values -- such expressions tend to be focused on self-fulfillment rather than on building powerful communities that further God’s vision for creation and for humanity.

It’s in this context that we hear these passages of Scripture, which remind us that we’re all in this together.  In Numbers, Moses forgets that the responsibilities for the community don’t fall totally on his shoulders.  Then, when a crisis emerges he starts complaining and feeling sorry for himself, but ultimately receives help, both from expected and unexpected sources. In James we hear about the power of prayer when it is shared in community.  And then in the Gospel of Mark, the power of relationship is developed in ways that challenge and enlighten.

The word that comes to us in the Book of Numbers concerns a food crisis.  The people are complaining about the lack of meat.  They’re tired of eating manna, and their cries are getting to be too much for Moses – and apparently for God as well.  The people begin to pine for the “golden age” of yesteryear when they ate free food – cucumbers and melons, leeks and onions, as well as garlic.  Now, they’re wasting away.  That they once lived in slavery has been forgotten.  How easy it is to forget how things really were.  We’re quite good at it.  Oh, how wonderful it was to grow up back then – in the 30s or the 40s or the 50s.  Ah, those halcyon days, back when segregation reigned, when women faced discrimination at every turn.  Yes, those were the days. Let’s go back.  But of course, that golden age is an illusion, and so we must press on.  God is outraged at all the chatter, and Moses is frustrated – how is he supposed to deal with this rabble?  The answer is found in sharing power.

In answer to Moses’ dilemma, God takes some of the spirit that is residing on Moses and places it on the seventy, so that they can share the burden.  But not only do they share the burden – the Spirit also falls on two brothers who have stayed back at the camp.  Maybe they’re guarding the tents, but they’re not counted among the elders.  That, however, doesn’t stop God from touching them and empowering them so that they can take their place among the leaders.  Now, such a reality doesn’t sit well with some who see themselves as paragons of authority.  Joshua gets upset at this act of God, and complains to Moses.  Moses, however, understands the ways of God, and says to Joshua – ah if only all of them were prophets.  That would be good.  There is more to this story than what I’ve shared, but in our context the witness is clear – this is a journey we share together, and leadership is shared as well – often with people we least expect.

In James 5, as this letter comes to a close, we hear a call to prayer.  If you suffer – pray.  If you’re happy – sing.  If you’re sick, call for the elders so that they can pray.  The first two directives can be undertaken by the individual, but in this third directive, such is not the case.  Call for the elders, let them anoint you with oil and pray for you, so that you might be healed.  Such prayers have power, when they’re rooted in faith.  But, for James sickness has a corollary – there is the possibility of sin, so confess your sins – not just to God, but to each other.  As we hear this, directive, many of us will stop and wonder about its wisdom.  How much do we share and with whom?

Churches are communities full of broken humans.  Sin resides in our lives.  Confessing sins can be dangerous.  Indeed, sharing our deepest secrets can be damaging to our lives.  James speaks here of sins, but what about those other markers of our lives that we hide?  People with mental illness dare not share their secrets, because there’s a stigma attached to mental health issues.  Oh, you have depression, why is that?  Is something wrong with you?  Or what about one’s sexual orientation – we practice “don’t ask, don’t tell,” but those who are gay or lesbian live in fear of discovery, live in fear of what the community might think.  Such fears render the community a place of brokenness rather than wholeness.  But, there is hope – in prayer, for it has the power to heal.  It may not cure, but most assuredly it can heal the brokenness that marks our lives and our relationships.  Perhaps that’s what needs to happen so we can restore each other to the path of God.

As we come to the Gospel reading, we again come back to the meaning of community.  John comes to Jesus, much like Joshua came to Moses, raising concerns about unauthorized agents taking up duties seemingly assigned to the inner circle.  We saw people, he says, throwing out demons and such – in your name – so we tried to stop them because they weren’t part of our club.  But Jesus, like Moses, responds – don’t be an impediment to the Spirit.  If they’re doing powerful works in my name, then they won’t be cursing me.  And here’s a word for our day – “whoever isn’t against us is for us.”  Too often we worry about boundaries.  We limit whom God can empower and through whom God can work, but Jesus seems to rest content in the knowledge that God will do what God will do.  The point is doing something good.  If they give you a cup of water because you’re mine, then they’ll be rewarded.

From this important statement Jesus moves on to questions of judgment.  Verses 42 to 50 are difficult to hear.  Jesus seems to suggest that we should impair ourselves, if parts of our bodies lead us astray.  It’s a rather grotesque set of statements, and yet in the midst of this difficult passage, we hear a message – don’t cause my children to stumble.  Don’t be that impediment.  Instead, be salt.  Be refined by fire.  Why?  So that you can be salt to each other.  After all, we’re all in this together, and when we’re salt that retains its saltiness, then we can become a means of peace in the world.

So, are we ready to work together to live into God’s vision of the New Creation?  Are we ready to share power?  Are we ready to find power in the midst of our relationships?  Or are we content to do it all by ourselves?
Email Post
Labels: Community Gospel of Mark James Kendall Clark Baker Leadership Lectionary Moses Numbers Ordinary Time Power Prayer Reflections Relationships