Capability and the Papacy 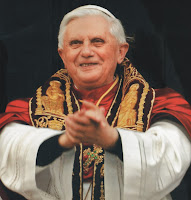 Whether or not we were surprised by Benedict XVI's recent letter of resignation, many of us have been fascinated by it.  Many have tried to figure out why, while others want to know what's next.  We've seen plenty of suggestions that ultimately leaving us asking:  "Is the Pope Catholic?"  That  is, many of us from outside the Catholic Church have been essentially inviting the next Pope to become an Episcopal Bishop at the very least.  Some of us have been interested enough in the whole question of resignation that we've looked back at the two previous instances, one demanded by a Council to end the Great Schism (1415) and the earlier one the result of a seemingly accidental Pope, feeling overwhelmed, who walks away (Celestine V).  [On Celestine V, Jon Sweeney's book The Pope Who Quit: A True Medieval Tale of Mystery, Death, and Salvation

is an interesting read.]

One of the issues raised by Benedict's resignation, a decision that only a Pope (or apparently a Council) can make, is capability to govern.  Benedict has stated that he was no longer able to keep up with the demands of the office and needs to let a younger man (women need not apply) take over.  James Hoke offers an interesting analysis of this question in today's issue of Sightings.  I invite you to read and respond.

Capability and the Papacy
-- James N. Hoke
Pope Benedict XVI’s resignation on Monday, February 11, 2013, has raised many questions about papal qualifications. In a recent post on the blog Think Progress, researcher and writer Jack Jenkins has enumerated some recent trends in papal attributes, which include fluency in several languages, having reached at least a certain age, and sharing the views of their predecessor. At the same time, in reflecting on these trends, it is striking to notice the number of persons excluded from possible consideration for this position of great power and influence. For example, feminist theologian Mary E. Hunt has eloquently framed the issue of male exclusivity in the papal selection process alongside feminist strategies for managing the media’s coverage of this event. Like Hunt, I’m certainly not the first (nor the last) to voice frustration at the church’s exclusion of women from its priestly (and therefore papal) ranks. In the weeks and months that follow, this issue, along with concerns about global location, race, and social commitments (to name but a few), will continue to be raised with respect to the election of the next pope. But Benedict’s resignation—for the first time— also raises the question of ability: must the Pope remain physically and mentally able in order to serve? And if the answer is yes, then how does one determine what constitutes acceptable ability?
In his resignation announcement, Benedict reasoned, “In today's world, subject to so many rapid changes and shaken by questions of deep relevance for the life of faith…both strength of mind and body are necessary, strength which in the last few months, has deteriorated in me to the extent that I have had to recognize my incapacity to adequately fulfill the ministry entrusted to me.” In rendering this decision, Benedict becomes the first pope to resign for reasons of illness and physical incapacity. The last pope to have resigned (over six hundred years ago) did so in the midst of the Great Schism; his resignation was based on political necessity for a divided church and had nothing to do with his age or his physical or mental capabilities. Benedict’s opinion on physical capability and the papacy contrasts with that of his predecessor, who continued in the position despite the visible evidence of his own physical deterioration. As an early analysis on the New Yorker’s blog pointed out, in continuing to appear before audiences, John Paul II took advantage of his aging and suffering image to garner sympathy and to show his own solidarity with “those who hurt.”
Ross Douthat’s New York Times editorial speaks directly to the theological shifts implied by a papal resignation: as the church’s “spiritual father,” the pope submits to God’s will by remaining in this position until death. Furthermore, “the church is still supposed to be the church even when its human leadership isn’t at fighting trim, whether physically or intellectually or (for that matter) morally.” Douthat’s analysis begs a broader question: what qualifies (cap)ability in our modern era? Have modern notions of and demands for particular forms of capacity engendered a fear of our own bodies (an idea reflected in queer theorist Jasbir K. Puar’s current work) while simultaneously creating potentially problematic expectations for proper leadership?
On the one hand, Benedict’s resignation appears to concede to the demands of modernity that a leader must remain fully capable while maintaining her/his position. However, at the same time, it also potentially makes room for new conversation about the politics of (dis)ability and their relationship to ecclesial and political leadership. While the concerns of feminists and others (noted above) are necessary to state, this shift could further make space for addressing wider concerns about papal qualifications for the twenty-first century and beyond.

Hunt, Mary E. “Smoke Gets in Your Eyes.” Feminist Studies in Religion (blog).

Jenkins, Jack. “5 Qualifications for the Next Pope.” Think Progress (blog).

James N. Hoke is a Ph.D. student in New Testament and Early Christianity at Drew University’s Graduate Division of Religion, where he focuses on queer theory in and around Paul’s letters. He is a graduate of the University of Chicago’s M.Div. program.