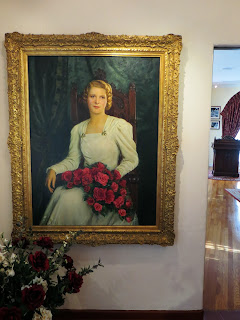 One of our first stops on our trip to Southern California was to Angelus Temple, the mother church of the International Church of the Foursquare Gospel.  For those not familiar with the Foursquare denomination (one of my own denominational stops), it was founded in the early 1920s by evangelist Aimee Sample McPherson.  Long before many mainline Protestant denominations were ordaining women, Aimee heard a call from God and never looked back.

I have long been fascinated by Aimee.  I dare say that the vast majority of members of the denomination she founded know her name.  Few know of the barriers she broke through.  Consider that at age 17 she married a young evangelist and headed off to China, where her husband died soon after they arrived leaving her pregnant and stranded.  She found her way home, remarried, had another child, and headed out on the road.  She didn't have a strong formal education, but she had a powerful sense of call, believing that if God had gifted her, then she couldn't say no.

After preaching along the eastern seaboard, Aimee, accompanied by her mother and two children drove across the country from New York to Los Angeles.  Now, this was 1918 -- long before interstates or even paved roads in many parts of the country.  They made it across the continent, and then before long had found a spot to build a church (that would seat 5000), and gain the attention of a nation.  She was also the first woman to preach on radio and own her own radio station.  In a day in which it is important that church leaders be media savvy, she borrowed from Hollywood to provide her famed "illustrated sermons." Among her advisors was Charlie Chaplin. 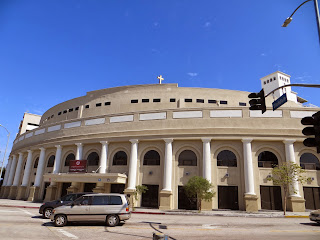 Yes, she was controversial.  She wasn't a perfect person and her theology is not mine, and yet in spite
of her personal frailties, she persevered and shared the gospel as she understood it. In reflecting on Aimee's life, I wonder about how boundaries get broken.  When people told Aimee she should not preach because women are to be silent in the church, she appealed to her gifts and calling and asked her detractors how she could say no to God.  How indeed?