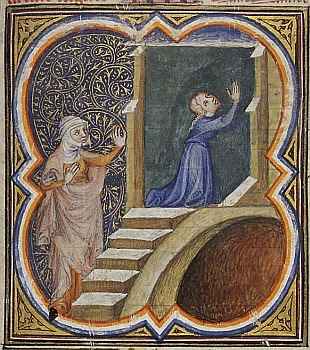 Abraham wasn’t afraid to confront God.  He had a sense of what needed to be done and took it up with God.  When he interceded on behalf of Sodom, he got God to agree to the bare minimum of faithful persons before agreeing to let God cast judgment (Gen. 18:22-33).   The point isn’t whether Abraham’s intervention proved successful – remember that once Lot’s family exited not even one righteous person could be found or whether we approve of this account of God’s judgment.  The point is simply this – Abraham was persistent in his engagement with God.   He was respectful, but he also was willing to push God.

I have some background in Pentecostalism.  Some of the teachers I encountered pushed a version of faithfulness that I ultimately rejected.  Why did I reject it?  Well, I came to believe that it’s bad theology to blame bad outcomes on a lack of faith on the part of the ones praying.  That said, Scripture does offer plenty of examples of persistence, and Jesus seems to embrace a theology of persistence in prayer.  So, how do I separate out my aversion to the prosperity gospel while hearing Jesus’ call to be persistent in my prayers?

If we step back into the 17th chapter of Luke, we find him speaking of the nature of God’s realm.  He speaks of the nature of faith and of gratitude.  When it came to nailing down when and where this realm would emerge, Jesus seems rather coy.  It’s not coming in a way that can be easily observed.  It won’t come with the typical institutional forms.  It will lack thrones and palaces and guards.  In fact, “the kingdom of God is among you” (Lk. 17:21b NRSV).  And it would seem that if one has the faith the size of the mustard seed, then one is prepared to tap into this realm that is God’s.    Why?  It’s because God is faithful, not because we have some inherent power of our own to affect such things.  Such then is the way of the kingdom – it is the work of God that we’ve been invited to participate in.  The question is – are we willing to engage with God till the end?   Will Jesus find us faithful?  That is, will we be continuous in our prayers – that is continuous in our engagement with the living God?

As he often does, Jesus tells us a story – a parable – that speaks to this question.  In the parable of the unjust judge we encounter a person who doesn’t fear God.  That is, this judge, this leader of the community, has no sense of God’s majesty.  He is, you might say, his own god.  He makes his own rules and administers them in ways that suits his own welfare.  Therefore, even though he holds a position that requires wisdom, he’s not a person of wisdom (Prov. 1:7).  He is, however, pragmatic.

He’s pragmatic in his realization that he won’t get any peace until he gives this woman who comes to him continuously seeking justice what she desires.  She’s not easily deterred.  She keeps knocking.  She keeps holding vigil.  In other words, she’s made herself a pest.  And so, he gives her what she asks for, simply to get rid of her.  When we hear stories like this, we’re tempted to jump to the conclusion that the person in authority is God.  If we’re to understand the message, we’d better let Jesus finish the story.

The unjust judge gives way to the woman because of her persistence – just to get her off his back.  But, God isn’t like this judge.  God isn’t capricious and self-absorbed.  Prayer isn’t the same thing as Sheldon knocking on Penny’s door until she answers.  Prayer isn’t making oneself a pest.  That’s because God is unlike the judge.  God isn’t slow to answer and provide justice to those who call out.  You might be wondering if this true, but perhaps we don’t have a good gauge on what God considers quick.  Whatever the case – God is faithful to God’s promises.  God has made a covenant and remains true to it.

Jesus invites us to be persistent in our prayers – not because God is disinclined to answer us unless we make a lot of noise – but because this is his definition of faithfulness.  If God is faithful, then shouldn’t we also be faithful?

There is in this discussion of prayer an element needing to be highlighted.  The woman goes to the judge seeking justice.  She has been wronged and seeks redress.  Although Jesus doesn’t address this question directly in this sphere, it is clear that Jesus is concerned about justice.  To be faithful in our prayers, it would seem that we must be faithful in our horizontal relationships.  Justice is about attending to the command to love one’s neighbor.  As the first letter of John reminds us – how can we say we love God, whom we can’t see, if we don’t love our brother or sister, whom we can see (1 Jn. 4:20).  Now we can take this in a very narrow way and simply apply it to family or fellow Christians, but I sense that this is far too narrow.  Remember that God loves the world (Jn. 3:16).

I affirm the Protestant principle that it’s faith not works that justifies, but a faith that expresses itself in a form that the unjust judge would recognize as his own, doesn’t seem to fit with the kind of faith Jesus expresses.  To be persistent in our relationship with the living God will lead to a change in the way we view each other and live with each other.  We do good works not to prove ourselves worthy of God’s love.  We do them because they are expression of a relationship that is persistent – in season and out of season.  So, will Jesus find us to be faithful?

Note -- I drew inspiration for this reflection from Ronald J. Allen and Clark M. Williamson's Preaching the Gospels without Blaming the Jews: A Lectionary Commentary.