Guess Who Is Coming to Dinner? -- A Lectionary Reflection for Pentecost 24C 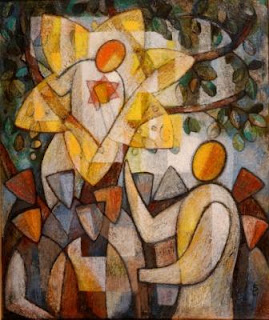 Luke 19:1-10
Jesus entered Jericho and was passing through town. 2 A man there named Zacchaeus, a ruler among tax collectors, was rich. 3 He was trying to see who Jesus was, but, being a short man, he couldn’t because of the crowd.4 So he ran ahead and climbed up a sycamore tree so he could see Jesus, who was about to pass that way. 5 When Jesus came to that spot, he looked up and said, “Zacchaeus, come down at once. I must stay in your home today.” 6 So Zacchaeus came down at once, happy to welcome Jesus.

7 Everyone who saw this grumbled, saying, “He has gone to be the guest of a sinner.”

8 Zacchaeus stopped and said to the Lord, “Look, Lord, I give half of my possessions to the poor. And if I have cheated anyone, I repay them four times as much.”

9 Jesus said to him, “Today, salvation has come to this household because he too is a son of Abraham. 10 The Human One[a] came to seek and save the lost.”   (Common English Bible)

Everyone who has gone through Sunday School probably knows the story of Zacchaeus.  He is probably better known for his shortness of stature than for his profession – that of the tax collector.  This encounter with Zacchaeus falls on the heels of Jesus’ parable about the Pharisee and the Tax Collector.  That parable focuses on attitudes and demeanor in prayer.  Now, we have an encounter that spells out the attitude described in the parable (Luke 18:9-14).

In Luke 19, we get to encounter a real live tax collector, a person despised for his profession and the manner in which he performed his job.  Zacchaeus – note that he does have a name – is described as being the chief tax collector.  He was, in essence, the local mob boss.  Like many mob bosses (Don Corleone, for instance), he had gotten rich – largely on the backs of the people of the community in which he lived.  He worked for the Romans, but more importantly, he worked for himself.  Rome got its cut, but he got what he needed – from the tax payers, but also from the collectors who worked for him.  The Roman tax collection process worked something like a multi-level marketing scheme (think Amway or something like it) combined with a loan shark persona.  The realities that lie behind the work of the tax collector makes our traditional vision of Zacchaeus a bit untenable.  We think of his shortness of stature – the reason for climbing the tree to see Jesus – as a handicap or something like it.  His shortness didn’t keep him from being ruthless (think Louie DePalma of Taxi).

Whatever his stature, Jesus sees him up in the tree and invites himself over to Zacchaeus’s house for dinner.  Once again we have a contrast of attitudes.  The people who see Jesus’ choice of dinner partner grumble.  Once again he’s hanging around with the wrong crowd – and as we all know “birds of a feather, flock together.”  The people find it difficult to see this meal as being redemptive.  They see Zacchaeus as one who lives beyond the pale, a person who cannot be saved.  Indeed, a person whose background suggests he doesn’t deserve to be saved.  But Jesus sees something different.  He doesn’t dismiss the dark side of Zacchaeus’ personality.  Nor does he see Zacchaeus’ good side outweighing the bad.    No, Jesus understands that Zacchaeus is bad to the bone, and yet Jesus also sees him as one who can be redeemed.  It’s not that Zacchaeus needs a little push so that his better side can come to the fore.  No, Zacchaeus is in need of a complete makeover.  And in his invitation to Zacchaeus, Jesus begins the process of redemption.

Yes Zacchaeus goes looking for Jesus, but perhaps Jesus was looking for Zacchaeus as well.  And it is the invitation that sets in motion the change in the life of the tax collector.  It is the invitation to come to the table that leads Zacchaeus to take the step of faith that leads to that change in his life.  “Lord, I give half my possessions to the poor . . . .”  And he offers to pay four times what he stole from the tax payers.  Now you might be wondering, why didn’t Jesus demand everything as he did with the rich young man?  I don’t know that answer to this.  Perhaps Zacchaeus needs more seasoning, but it’s clear that the encounter with Jesus has changed his life.  He has been redeemed – at the table.

One of the debates that has long gone on within the Christian community concerns who is able to gather at the Table of the Lord.  Do you have to be baptized or confirmed?  Do you have to believe in Jesus?  Does your behavior warrant your inclusion at the table?  We don’t know exactly what the practices of the early Christians was, but by the second century measures were taken to make sure that only the properly initiated were allowed to participate in communion.  Many denominations limit access to the table to those who are members in good standing.  Others require at minimum baptism/confirmation or at least a firm belief in Jesus as Lord and Savior.  But interestingly, Jesus never puts these kinds of stipulations on whether one can eat with him.  What is clear, though, is that these dinner encounters, like the one with Zacchaeus, prove life changing.

Could it be that this story offers us a foundation for understanding the Eucharist as an ordinance of conversion and redemption?  I realize that not everyone who comes to the table and shares in the cup and the bread experiences a life changing encounter with Jesus, but who are we to bar someone from having that opportunity?  And if, as I do, one believes that Jesus is truly present in the service of Holy Communion, whether we are fully aware or appreciative of that fact, then shouldn’t Jesus’ practice, the practice that redeems Zacchaeus, be the practice of the church today?   For as Jesus says – his mission is to come and find and save the lost.
Email Post
Labels: Conversion Eucharist Gospel of Luke Holy Communion Jesus Lectionary Redemption Reflections Salvation Zacchaeus