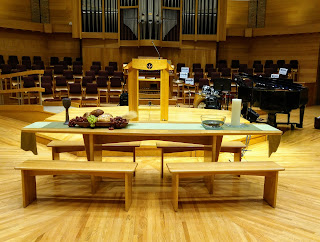 
When we are young, we learn our table manners. They may be culturally defined, but there are some things that you do and some things you don’t do. That makes cross cultural dining an adventure, because when you go into a different culture you may not know the proper etiquette!

As for me, when I was a child I learned that I shouldn’t talk with my mouth full of food. I also learned a proper way of holding the fork and the knife. And, I was taught to wait until everyone was served before I began eating. Whether we obey the rules or not, they have a purpose!

When it comes to the Table of the Lord, there are certain expectations, which are often congregationally defined. For example, each congregation has policies about when to eat the bread and drink from the cup. We place those instructions in the bulletin. If you’re a guest, even if you read the instructions, you probably wait to see what others are doing, before you make your move. When we try something different, like intinction, it can be confusing, even for regular attenders! When the context of the Supper is a full meal, things get even more complicated.

As we continue our conversation about “Eating with Jesus,” we find ourselves reading from Paul’s first letter to the Corinthian church. He wrote the letter to correct certain behaviors that were afflicting church life. He was concerned about the health and welfare of the Body of Christ. Among the issues he addressed, was their Table Fellowship, which was somewhat unhealthy.

The conversation about the Table begins chapter 10, where Paul wrote that their meal was supposed to be a sign of unity, but it had become a sign of disunity. He pointed to the one loaf that the congregation shared and told them that this one loaf of bread symbolized the one body of Christ (1 Cor. 10:17). Unfortunately, they weren’t experiencing the unity symbolized by that loaf, which meant that their life together wasn’t proclaiming the glory of God (1 Cor. 10:31).

It’s here in 1 Corinthians 11, in the midst of Paul’s instructions about the proper decorum at the Table, that he introduces the earliest version of the Words of Institution. Paul claimed he received these words, which we share each week at the Table, from the Lord. He wanted to pass on this teaching to the church so that they could share the meal in a worthy manner.  He told the church that “as often as you eat this bread and drink the cup, you proclaim the Lord’s death until he comes” (1 Cor. 11:26). That means this isn’t just any meal, it’s a meal with a message. It’s a proclamation of Jesus’ death until he returns, which means it is a meal that celebrates the resurrection. It also means that there’s an eschatological element to this meal.

When we gather at the Table to share in the Lord’s Supper, we prepare ourselves to share in the great banquet that will take place when the realm of God is fully revealed. But, even before we share in that meal, as Keith Watkins reminds us, “at the table we become partakers of God’s love. In companionship with countless other faithful people, we are united with Jesus Christ who is the embodied love of God” [Patterns of Faith in a Table-Centered Church, unpublished, p. 37]. So what message are we proclaiming when we gather at the Lord’s Table? How are we expressing Jesus’ embodied love of God? Are we sharing this meal in a worthy manner?

When Paul wrote to the church in Corinth he wanted to correct specific behaviors that he believed detracted from the Gospel. He had heard that the social divisions that existed in Greco-Roman society were finding their way into the church and were infecting their Table fellowship. This is why Paul wanted them to “discern the body,” by which he meant the community. He condemned them for eating the meal in an unworthy manner, because they failed to recognize the way in which the social divisions that existed in the broader community were present in the church.

Paul wasn’t concerned about ritual here. He wasn’t concerned about whether the congregation was using the proper words in their prayers. He didn’t even care how the Table was set. What he cared about was the message that their Table fellowship sent to the broader community. The question he posed to this church, and to us, has to do with whether our meals embody the love of God revealed in Jesus?

Because the church, through the ages, has read the words “discerning the body” and eating “in an unworthy manner” liturgically, we’ve missed the point. Paul isn’t suggesting that the church discern whether the bread and wine had become the body and blood of Christ. What he wanted them to do was discern whether their actions built up the body of Christ, which is the church. He had to do this because the Corinthian table practices reflected the worst elements of their society. The problem was rooted in the class differences present in that society. The church dishonored the table because it neglected the poor and the marginalized in their community.

If we’re going to get Paul’s point, we have to envision a symposia, which was a Greco-Roman banquet that usually took place in homes and involved food, conversation, and entertainment. Where you sat and the food you ate depended on your social status. If you were a person of note, you got to sit close to the host. Since these meals were usually held in homes, the upper classes would sit in the main room. It appears that the wealthy members who got to sit in the seats of honor, got served first, and ate the best food and drank the best wine. That’s in part due to the fact that they often arrived first. If you happened to be from a lower social class, then you probably arrived later due to your work schedule, you sat outside the main room, and you got served lower quality food, if you go served at all. So, by the time everyone arrived at the service, and had been served the meal, some members had eaten their fill, while others went hungry. When Paul mentions in verse 30, that some may have died, it’s possible that he had in mind the early arrivers, the wealthy in the community, who had drunk so much wine that they had fallen asleep. That led Paul to tell this church, which he planted, to properly judge themselves, so that the community could eat in a worthy manner and not suffer God’s judgment.

Paul was scandalized by the actions and attitudes of the Corinthian church, because they made a mockery of the Gospel. They cast Jesus in a bad light. So, he told the offending church members, that if they were hungry, then they should eat before they arrived. That way they could wait until everyone was seated and served, just like my mother taught us when my brother and I were children. This kind of Table would symbolize unity, because everyone would get to eat the same food, at the same time. No one would be excluded.

When Paul writes about Table fellowship in 1 Corinthians, he’s focused on the health of the body of Christ. He addresses the social divisions that had infiltrated the church and were making the body sick. If they’re going to continue to gather at the Table, then they should discern the body, so they can eat the meal and not be guilty of the body and blood of the Lord. That is, so that they don’t kill Jesus through their behaviors toward each other. The question for us is this: How do we eat with Jesus in a worthy manner? How does our meal exhibit the unity of Christ’s body?