Body and Spirit - A sermon for Epiphany 2B (1 Corinthians 6) 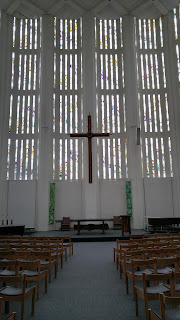 
I find Paul’s Corinthian letters to be intriguing. There is so much going on in these letters. They address real life issues and concerns. So, when I was in seminary, I took two classes that focused on all or part of 1 Corinthians. In fact, a friend and I drove across LA from Pasadena to Westwood in my less than reliable Ford Maverick to study 1 Corinthians with Scott Bartchy. Going to class wasn’t a problem, but coming home around five o’clock on the 405 Freeway was an adventure. But it was worth the effort! When I sat down to plan my sermons for the season of Epiphany, and noticed that the epistle readings in the lectionary came from the Corinthian letters, I got excited.

Paul wrote these letters to a congregation filled with new converts who came out of a very different cultural context than he did. So, when they heard Paul’s message of grace and freedom, they interpreted it in light of their former lives, and what they heard was an invitation to live with reckless abandon. They heard Paul saying that no rules applied. That’s not what he intended, and so he had to address the situation brewing in that community. One of the issues that emerged had to do with a topic that is rarely discussed in church, and that is sex. So, when I sat down to read the text again on Monday, I asked myself—why did I choose to preach on this passage? This can only get me in trouble. But here we are, with a word from Paul addressing a forbidden subject.


Corinth was a diverse community. It was a port city filled with temptations, including the presence of prostitutes. There were those in the city who embraced the teachings of the Stoic-Cynic philosophers who taught that true philosophers were above the law. They could do with their bodies as they pleased, because it was the soul, not the body that was important. So, when these new church members heard Paul’s message of freedom, they interpreted that message in light of their own background. They even came up with a slogan: “All things are lawful for me.” We probably should interpret “lawful” to mean “permissible.”

Paul answered them by first agreeing with their slogan, and then turning it on its head. Yes, everything is permissible, but not everything is beneficial. In fact, even though he is free to do as he pleases, he won’t be dominated by anything. With that he turns to the big issues facing this congregation. One of those issues had to do with food, and more specifically, where you got your meat. While it might be tempting to use this passage as a word about dieting after the holidays, I think I’ll skip that one for now.

The other issue has to do with “fornication,” and more specifically the issue of visiting prostitutes. It would seem that some of the men in the church, claiming their freedom in Christ, had been visiting the local brothels. This doesn’t sit well with Paul, who not only believes it is inappropriate, but also sacrilegious. Since I doubt many of us here today have visited a brothel recently, how should we hear this word from Paul?

As I read this passage, I couldn’t help but think about the #MeToo movement, and the revelations that keep coming out about famous people, ranging from news anchors to movie producers to politicians, who have been accused of either sexually harassing or assaulting women. A common theme has emerged from many of these revelations. It seems that many of the accused believed that due to their positions in society, “everything is permissible.” Once the movement gathered steam, more women have spoken out, leading to more men falling from the heights.

As the revelations poured forth, many men, myself included, began to look back over our lives. Most of us can point to times and places where we have acted inappropriately. It might have been a word inappropriately spoken, a kiss given that made a woman of our acquaintance uncomfortable, or perhaps it was a hug that lingered too long. Many of us shuddered to think that there could be someone out there who might speak our names.

We are entering new territory, which means we have to broach the forbidden topic. Lives are being affected and the rules of conduct are being written anew. There are some men in church leadership who have chosen to follow the so-called “Billy Graham Rule.” Billy Graham has a policy of never being alone with a woman other than his wife or daughters. You can understand why some men might choose this path, but it is a dangerous one. That’s because it closes off opportunity for women to participate fully in business, in education, and in the church. So, maybe there is a better solution, which is why Disciples clergy are required to take boundary training.

When we read letters like this, it’s always important to consider the context. In this case, Paul responds to the crisis in the church theologically. He invites the congregation to think about our bodies as temples of the Holy Spirit. In that context, he speaks of fornication as sinning  against the temple where the Holy Spirit resides. I think it’s also important to remember that for Paul, as a Torah-observant Jew, sexual relations were to take place within the bounds of marriage. Paul’s understanding of the relationship between body and soul also differed from how many Greeks understood this relationship. Paul didn’t separate body and soul like the Greeks did. In his mind, body and soul go together, so what you do with your body and the body of others has spiritual implications.

I like what Lincoln Galloway, a teacher of preaching at Claremont School of Theology, has to say about what is happening in Paul’s congregation. He writes: “Paul indicates that freedom cannot include engaging their sexual fantasies at the expense of women, even if these women are in shackles as slaves or live as prostitutes. Freedom has to be defined in terms that honor and respect human bodies. The body is not a morally neutral zone.” [Preaching God’s Transformational Justice, p. 68].  That’s because it is the temple, the home, of the Holy Spirit.

The church has shied away from talking about sex, because it’s seen as private and personal. We often get embarrassed talking about sex in mixed company, but in doing this, we tend to ignore the elephant in the room. The #MeToo Movement has put the issue front and center. The danger here is offering either an overly rigid and moralistic perspective where sex itself is seen as dirty, or simply saying, as some in Corinth believed, everything and anything is permissible. I believe the truth lies somewhere in between these two poles. At the very least, we should honor our bodies, and the bodies of others, as temples of the Holy Spirit. They are, by definition, sacred vessels, created by God in the image of God. This should lead us to respecting each other’s bodies.

As I read the passage, I realized that Paul’s discussion of the body goes beyond the human body to the body of Christ. On one hand, we have a word about how we treat our bodies and the bodies of others that is rooted in sacred duty. But, if Paul is thinking here in terms of the church as the body of Christ, which is also the Temple of the Holy Spirit, then this word has even more implications for us. In flaunting their freedom, these Corinthian Christians sinned against the church. They acted in a way that undermined the church’s credibility in the eyes of its neighbors. By using their freedom to exploit rather than benefit others, they brought shame on the community. We have seen examples of this occurring with too much frequency in recent years. The Catholic Church has dealt with it, and Protestant churches have as well. More often than not, church leaders have used their “spiritual” power to keep women and children from speaking out when they were abused, and in doing this they have destroyed both body and spirit.

In 1 Corinthians 10, Paul again quotes this slogan that “all things are lawful.” He responds to their claim, by reminding them that not all things are beneficial and build up (1 Cor. 10:23). I think that’s the point here. The way we treat each other is a reflection on the body of Christ. We are free in Christ, but we’re not free to destroy. We are free to bless and build up the members of the body, especially those who are most vulnerable.

So, maybe it is time to talk about sex in church. In fact, it might even be time to mention it in a sermon, so we can start a conversation about freedom and responsibility. The good news is that in Christ all things are made new. Reconciliation is possible, but first we have to address the elephant in the room. In doing this we, who were bought with a price, and therefore redeemed from the bonds of slavery to sin, can glorify God in our bodies—that includes both the human body and the body of Christ.