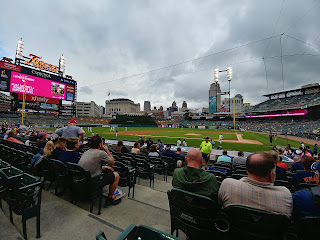 It is perhaps my favorite movie. It is about baseball and father/son relationships. You guessed it -- it's Field of Dreams.  Ray Kinsella keeps hearing this voice telling him to do two things -- "heal his pain" and "go the distance." He builds the baseball field in an Iowa cornfield, which is inhabited by old time players, now dead, led by Shoeless Joe Jackson. If you know the movie, you know the story.

I draw on that image, as I reflect on the current state of affairs in our country. The Mueller Report was turned in, a summary has been released, but we do not really know what it says and why it says what it does. On one side there are those who are doing a victory dance. On the other side there are those who feel betrayed, believing that the President would be found out, and now feel dejected. Both sides are probably jumping to conclusions, but it's understandable.

I used to enjoy writing about politics, but not so much these days. There doesn't seem to be much to gain, at least in the near future. So, here is why I draw upon that message to Ray Kinsella -- "Go the Distance."  Politics is often focused on short-term gain, but change requires long-term vision. You have to persevere. You have to play the long game.

Do I believe that Donald Trump is unfit to lead the country?  Yes. Do I believe the policies he's pursuing are bad for the country? Yes. Is a good model for our children? No. Is he someone Christians should embrace? No. That being said, he is for now the President. So, how should we respond? Impeachment isn't going to happen. So, let us decide what is important, what is achievable in the short term and then let's go the distance.  Let us pursue justice and mercy. Let us stand for what is right and good. Let us not lose heart, for we can do good things, if we stay focused. It will take hard work, and courage, but little by little good things will take place. I already see some seeds being planted. the 2018 Midterms offered some clues. So, let us keep our eyes on the prize.

Ray Kinsella built his baseball field, and despite all odds it worked. Even as he sought to heal the pain of others, he was able to have his own pain healed, as he was reconciled to his long-deceased father with a game of catch. Yes, let's go the distance!

By the way, it is Opening Day for Major League Baseball, which means I must go the distance with the Giants and the Tigers!