I grew up about an hour south of Crater Lake National Park. If you’ve been there, then you know it’s a magnificent sight. The water is such a deep blue that it draws you into its depths (even if you’ve never been down to the shoreline—I’m not sure why we never took the journey down to Cleetwood Cove). I’ve been to a few other National Parks, but there are many more to go (when I’m 62 I can get a lifetime pass, so National Parks are on the retirement bucket list). Although I've been to my share of cathedrals and temples, nature does have a unique way of declaring the glory of its Creator. We are fortunate that persons of foresight have chosen to preserve some of our most beautiful and inspiring places for posterity so that we might share in God’s bounty.

America’s Holy Ground is a fitting title to the book that Brad Lyons and Bruce Barkhauer have written. These natural spaces are true reflections of the holy, and thus worth celebrating. Brad and Bruce have produced a book that invites us to consider the beauty and grandeur that has been preserved for posterity in the nation's National Parks while inviting us to celebrate their Creator. They take us on a journey through all sixty-one National Parks—from the oldest to the newest. While I knew Yellowstone is the oldest park, I was surprised to learn that Indian Dunes National Park was recognized only this year and is included in the book. Of this park, they write: “At our best, we steward resources to preserve claims of competing forces. A compromise so the best of each can go forward in harmony rather than enmity. Ironically, Indiana Dunes reflects that balance not only its terrestrial composition but in its birth: the congressional spending bill creating the park was itself a political compromise to avoid a government shutdown” (p. 137). Who knew?

The book takes us through all sixty-one parks alphabetically (that seems fair), beginning with Arcadia in Maine and concludes with a reflection about Zion National Park in Utah. Some of the parks in the book preserve desert landscapes others preserve wilderness tracks in the far north of Alaska. There are a few parks that preserve such as Hot Springs National Park in Arkansas. There are parks that invite us to take in the beauty of mountains, rivers, canyons, volcanoes, and seashores. Some are found in the midst of a city—The Gateway Arch in Saint Louis—while others are so remote that you have to “fly in, hike in, or ‘mush in,’ but you cannot drive in!”—Gates of the Arctic National Park (p. 90). I was surprised to learn that a large number of parks were created in Alaska in 1980, including the aforementioned Gates of the Arctic. These preserve remote and primitive spaces that remain largely untouched by human hands (and hopefully remain in much the same form). We encounter famed parks like Yellowstone and Yosemite, as well as ones we may not have known existed —including several rather large ones found in Alaska.

Brad and Bruce provide a brief introduction to each park and then invite us to use our spiritual imaginations to discern something about God and God's relationship with creation as part of the reflection. Each park is given a one-word designation that signals the nature of the reflection. Some are ironic, such as the word given to Death Valley National Park. That word is “life.” But, despite the name given to the valley, it is in reality filled with life. In their reflection, they note that the prospect of death is part of life. The path we take isn’t always easy and the systems we participate in might damage us. Yet, “amidst difficulty are signs of life-giving activity” (p. 78). They also provide a scriptural epigraph to start each reflection, signaling that what we are about to read has spiritual importance. 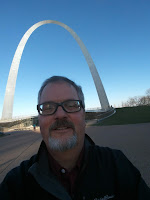 This is not intended to be a travel guide, though they do a nice job of describing each park. It is intended to connect nature with the spiritual, so we might celebrate the Creator and embrace the creation as well. The reflections run from two to four pages. Each reflection is accompanied by full-color pictures (one of which will take up a full page). The two pagers usually have one large picture on one page with the reflection placed on the facing page. The four pagers usually have several pictures. The Cuyahoga Valley National Park (near Cleveland) has one large picture plus four more small pictures that give you a sense of the diversity of the experiences awaiting you. I should note that this reflection is titled “Restoration,” which is fitting for a river that once caught on fire. While some of the pictures were taken Brad or Bruce, many others are the property of the National Park Service. Whatever the source, all are in color and are inviting to the reader.

One of the things I realized as I read through this book and took in the wonderful pictures is how few of the parks I've actually visited. I’ve been to Crater Lake, of course, along with King’s Canyon and Sequoia (but not Yosemite). I’ve been to Cuyahoga Valley and the Gateway Arch. I visited Lassen Park when I was a child. I remember this large rock that was still warm from the eruption some fifty years earlier. I’ve been to the Redwood National Park fairly recently and stopped at the visitor’s center at Petrified Forest but didn’t go into the park (does that count as a visit?). So much beauty, so much more to see. And now I have a guide—not so much a travel guide as it is a reminder that these spaces are truly holy spaces. Of course, I’ve almost reached the age when I can get that lifetime pass. So, America’s Holy Ground, here I come!

This book is quite an undertaking. It is beautifully presented. They used heavy duty glossy paper that shows off the pictures to their fullest. Yet, it’s a relatively small book. In other words, this isn’t a coffee table book. It’s a book you can take with you as you head out on a sacred journey. With that in mind, they even included at the back of the book a set of pages for journaling (each page offering another picture to inspire). Yes, this is a wonderful book to peruse and ponder (and it will make a great Christmas gift). As we read and engage with the pages, we might be spiritually uplifted, as well as being inspired to protect these and other God-given spaces.