At the Cradle of the Zwingli's Reformation 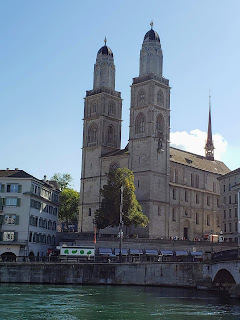 I have been visiting the Swiss city of Zurich, as part of my River Crossings sabbatical. Zurich is where Ulrich Zwingli presided over the opening of the Swiss Reformation. Zwingli doesn't have the same fame as Luther or perhaps the influence of Calvin (except for the Reformed view of the Lord's Supper). Zwingli's reforms came a few years after Luther, but in many ways he went further than Luther.

The picture above is of the Great Minster (Grossmunster). It is the church over which Zwingli 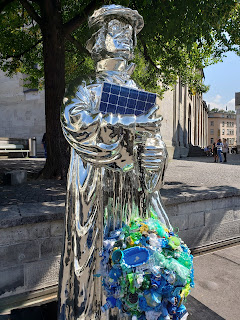 presided when introducing his reforming views in the early 1520s. Zwingli's reformation was more thoroughgoing than Luther's. This was especially true of his view of the real presence in the Eucharist (strongly memorialistic), but also with regard to music. Zwingli is reputed to have taken an axe to the church's organ (ironically the church now hosts organ recitals).

While Zwingli sought to purify the church of the encrustations of Catholicism, he refused to go move into a restorationist mode. When the earliest Anabaptists in Zurich sought his support for replacing infant baptism with believer's baptism, he balked. The justification for his position was the embrace of a church-state relationship that assumed baptism led to citizenship. To abandon infant baptism could undermine the close relationship of church and state.

While there is much about Zwingli's positions that give me pause, being in the house of Zwingli invites thoughts about the nature of reform. Interestingly, Zwingli moved  toward restorationism, but stopped short. In many ways this resulted from him believing that the good of the whole community required a partnership of church and state. Going too far could endanger that relationship. The statue of Zwingli that until recently stood near the Great Minster pictured him with Bible in one hand and a sword in another (Zwingli died in battle defending his city). That leads to questions for us as to how close we should work with the powers that be. It also leads to the question of the degree to which founding figures influence their descendants.

Regarding the River Crossings motif -- note the Limmat River in the foreground!