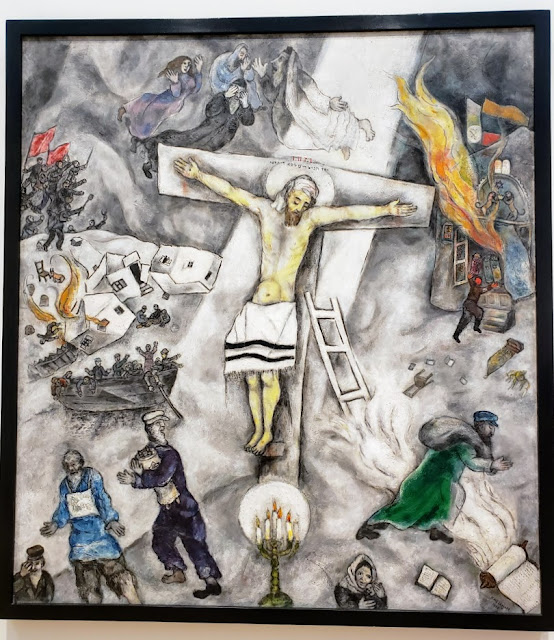 I hope you will spend some time pondering this image. It is a painting by Marc Chagall that is housed in the Art Institute of Chicago, which Cheryl and I recently visited. Chagall painted this in 1938 and first displayed it in 1940. It was at this moment in time that the Nazi regime was in the midst of its push to conquer Europe, having invaded France and the Soviet Union. As part of its effort, the Nazis were determined to exterminate the Jewish population of Europe. They were aided in this by religious efforts to coverup Jesus' Jewish identity.  The "Final Solution," of course, wasn't the first attempt at trying to destroy the Jewish people. As you can see from Chagall's paintings, the crucified Jesus is surrounded by images of persecutions and pogroms directed at the Jewish people.

According to the sign posted with the painting, this was Chagall's first attempt at portraying Jesus as a Jewish martyr as a way of calling attention to the persecution of the Jews. These images emerged from Chagall's experiences growing up in Russia, with its many pogroms. Now, with these images, by identifying Jesus with the Jewish people, he was attempting to connect the Nazi regime to Jesus' tormenters.

So the question is: when we as Christians portray Jesus do we affirm his Jewishness? What does this mean for us as we read passages like those in John's Gospel that speak of "the Jews" as opponents of Jesus? Other questions can be raised by the painting, but I simply want to invite you to ponder the painting and ask yourself what it says about Jesus.
Email Post
Labels: Art Christ Crucified Crucifixion Jesus the Jew Jewish-Christian Relations Marc Chagall Nazis persecution River Crossings