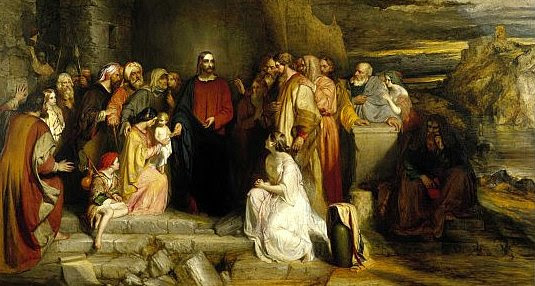 This reflection is reposted from October 28, 2014, at a time when I was working through the Gospels in my lectionary reflections.
Matthew 23:1-12 New Revised Standard Version (NRSV)

23 Then Jesus said to the crowds and to his disciples, 2 “The scribes and the Pharisees sit on Moses’ seat; 3 therefore, do whatever they teach you and follow it; but do not do as they do, for they do not practice what they teach. 4 They tie up heavy burdens, hard to bear, and lay them on the shoulders of others; but they themselves are unwilling to lift a finger to move them. 5 They do all their deeds to be seen by others; for they make their phylacteries broad and their fringes long. 6 They love to have the place of honor at banquets and the best seats in the synagogues, 7 and to be greeted with respect in the marketplaces, and to have people call them rabbi. 8 But you are not to be called rabbi, for you have one teacher, and you are all students. 9 And call no one your father on earth, for you have one Father—the one in heaven. 10 Nor are you to be called instructors, for you have one instructor, the Messiah. 11 The greatest among you will be your servant. 12 All who exalt themselves will be humbled, and all who humble themselves will be exalted.

*********************
Every year it seems that a Christian celebrity falls prey to their own ego. Many will know the recent story of Mark Driscoll and his fall from power. A well-known mega-church pastor, he was undone not merely by accusations of plagiarism, but ultimately by heavy-handed authoritarian leadership. His fall was quick and far. Robert Schuller’s “fall” was different – he simply couldn’t sustain his “vision” and so the great and grand Crystal Cathedral ended up in the hands of the Catholic diocese of Orange, serving as its new cathedral. As the pastor of a small church I could take solace in the belief that I am not in a position to be tempted by such visions of grandeur, but is this true?  Are we not all tempted by the need for honor and recognition? Do we not wish to be called doctor or pastor or Reverend?
Christian psychologist and blogger Richard Beck recently wrote about Christian Celebrity Culture. He noted that “standing on the stage in front of thousands--or selling a lot of books, or having a lot of social media followers--doesn't make you a celebrity, it just makes you popular. And there's nothing wrong with popularity.” What makes for a celebrity is “when one begins to separate themselves from the crowds they are speaking to or writing for.”

Celebrity involves a sense of distance, elite distance, from "the common person." And this, creating distance and separation from the crowd listening to you, is the toxic part of Christian celebrity. Because, at root, creating and maintaining this interpersonal distance is anti-Christian and anti-Christ.  [http://experimentaltheology.blogspot.com/2014/03/on-christian-celebrity.html]

As a pastor, I know that there has to be some sense of separation for healthy living. You can’t really be on call 24/7. After all, Jesus did take breaks from the crowd. He spent time away in prayer and simply resting so that he could continue the journey.  But he also made himself available to everyone, from the child to the religious leader. Problems begin to emerge when we start believing the stories of our own popularity when we get caught up in our own sense of importance at the expense of the other.
The message that Jesus delivers here – as he faces the religious elite in the days before his death – is that we must beware of the danger of preaching one thing and practicing another. That is, believing the rules apply to others, but not to ourselves. Jesus speaks of placing burdens on others that we ourselves are unwilling to carry.  It is a bit like a wealthy parent, who has the advantage of nannies and support staff lecturing a single mother living on a minimum wage job on how to best rest a child. We enter a danger zone when we become removed from the needs and concerns of the people we serve.
We all will face challenges in living out the faith we profess. But at the same time, we should not expect more of others than we expect of ourselves. Jesus’ of ministry is one of humility and service.  This doesn’t mean that we don’t have doubts or the struggle with life, but that we don’t place upon others burdens that we choose not to carry.  His concern was that the religious elite were placing burdens on the community that they simply could not bear up, and that their deeds were done for show.
Jesus notes that the elite were wearing their robes and other religious paraphernalia so that everyone would know that they were the big shots. They enjoyed sitting at the head table and the front row in synagogue/church.  And they loved their titles. In fact, they expected to be addressed by their titles.  I don’t know that there’s anything wrong with robes or clergy garb or even titles. I have a robe and stoles that designate me as a religious leader. I am called doctor and pastor – I’ve even been mistaken for a “Father” on occasion. I try to wear them lightly, but it is easy to get caught up in expectations that others will recognize and honor your station in life.
As a pastor, I know that I get paid to do religious work. The members of the congregation, on the other hand, are doing this work in addition to the other work they do. I get paid to go to church, they do not. I get paid to go to meetings, they do not. And yet it is easy to use guilt to goad members into being present at church and at meetings. Furthermore, in an age when more and more people are checking out of church and religious life, we must be ever conscious of the witness we are giving to the world.
Again and again, I have been impressed by the demeanor and tone of Pope Francis. From day one he chose a different path. He referred to himself as simply the Bishop of Rome. He chose to abandon red shoes and a fancy pectoral cross, for ordinary shoes and the same cross he had worn previously. He chose not to live in the papal apartments, but among priests living in the Vatican so that he could share life with them. He washed and kissed the feet of prisoners. Not only has he set the example he has called upon his fellow bishops to do the same (causing some gnashing of teeth amongst some who have come to appreciate the good life in the name of Jesus).
The word to us is simple:  “The greatest among you will be your servant.”  And a few days following this encounter, Jesus is placed on the cross, having been stripped naked and flogged, hung out so that all could witness his humiliation and his inglorious death.  And we who call ourselves our Christians are called to bear this same cross in humility and service.
Lauder, Robert Scott, 1803-1869. Christ Teaches Humility, from Art in the Christian Tradition, a project of the Vanderbilt Divinity Library, Nashville, TN. http://diglib.library.vanderbilt.edu/act-imagelink.pl?RC=55623 [retrieved October 6, 2020]. Original source: http://commons.wikimedia.org/wiki/File:Christ_Teacheth_Humility.jpg.
Email Post
Labels: Cross Ego Example Gospel of Matthew humility Lectionary Ministry Pride Richard Beck service