More on the Big Debate 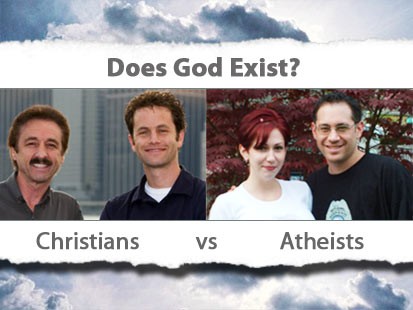 I've now been hit from both sides -- I've been chastised by Atheists for calling the Nightline Debaters "Rabid Atheists," and I've been called ignorant or worse for first not knowing who the heck Ray Comfort is and for bagging on fellow Christians. It's good to know I'm in the middle again.

Now, I'm not against Atheists, but some are a bit rabid, and from what I hear this duo is kind of in your face! And as for not knowing dear old Ray, well it's been a while since I've paid much attention to the full spectrum of the far right. The fact is, that on national TV these two Fundamentalists are set up to defend the "faith once delivered" is an embarrassment. If they want to debate on TBN, well fine, but ABC should know better.

So, here is a bit about the protagonists from the ABC story.

The Way of the Master has a weekly television show for which Comfort and Cameron literally hit the streets in the name of Jesus, challenging nonbelievers that their sins against God will lead directly to hell.

"On the Day of Judgment," Comfort tells one man on the streets of New York, "God will see you as a lying, thieving, blasphemous, adulterer at heart. You have sinned against God. You need his forgiveness."

As for the other side, well the Rational Response Squad seems to be the flip side of Ray and Kirk:

While their theological views differ from the Way of the Master, their approaches are similar -- brash and in-your-face. The Rational Response Squad challenges people to take the Blasphemy Challenge in which they make videos of themselves denouncing or blaspheming the Holy Spirit, and then post them on YouTube.

My problem with both sides is that they've narrowed the field of discussion in such a way that most of us are left out of the discussion of religion. Kirk and Ray think they can prove the existence of God -- scientifically -- but if you look at their "science" it has no credibility. For the other side, there seems to be the same black and white options -- you are either rational (atheist) or irrational (person of faith). The truth, I think is different.
So, as for ragging on people, yes I guess I"m guilty. I try to be civil, but reminded as I have by Sam Harris, that we moderates and liberals give cover for Fundamentalists, I must do my duty and pull the covers off!! Yes, it's a dirty job, but as they say, someone has to do it! Now, back to more positive stuff.

JP said…
What an extremely disappointing debate. The atheist acted like children by making comments under their breath and rolling their eyes while the arguments that Mr. Growing Pains gave for the existence of God were elementary. It did nothing, it had no affect, it changed no hearts or minds.
8:56 PM

Robert Cornwall said…
JP
Thanks for the report -- such as I expected. I was listening earlier to an On Point conversation with Christopher Hitchens and a Mega-Church pastor. The pastor -- I can't rememmber his name -- was of course outflanked, but Hitchens was simply rude -- often talking over the guy. I had to run so I didn't finish it out to hear what Wake Forest's Bill Leonard had to say.
11:00 PM