Severus Snape and the Transparency of Evil -- Sightings 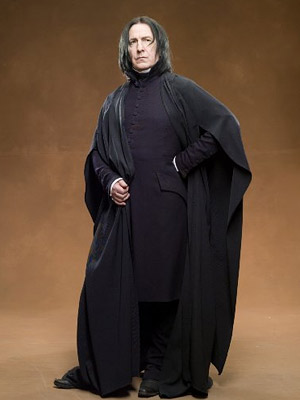 University of Chicago Ph.D. candidate Elizabeth Musselman wrestles with the moral qualities of one Severus Snape, Harry Potter's apparent enemy at Hogwarts, and yet perhaps not. Musselman explores the question of appearances and moral ambiguities. We like things black and white, good and evil, clear and not ambiguous, but Snape's character reminds us that all is not as it seems.

So, with the Harry Potter and the Order of the Phoenix in the theaters (I see it tomorrow) and the final installment of the Harry Potter series due in our mail boxes on Saturday (I pity the poor mail carriers or UPS carriers) -- one busy and heavy day -- Musselman's thoughts are worth pondering!!!

And yes this preacher is a Harry Potter fan!

Severus Snape and the Transparency of Evil--
Elizabeth Musselman

On July 21, children across the country will stay up all night reading as the narrative of Harry Potter draws to a close. Many adults will also stay up all night reading the final chapters in J. K. Rowling's imaginative epic of teenage wizards negotiating the forces of good and evil. Perhaps if Martin Luther were alive today, he too would find himself drawn into the textual world of Harry Potter -- for Harry's world bears some striking resemblances to Luther's theological realm. Appearances are deceptive, and human reason is not to be trusted; spoken words carry the power to defeat danger; and the ongoing struggle between good and evil finds no easy resolution.
One of the most contentious questions in the online world of textual interpretation (blogging, fan fiction, and the like) concerns the moral status of Severus Snape, Harry's "Defense Against the Dark Arts" teacher. Snape is the only character whose moral status has remained unknown through the series: while this greasy-haired teacher appears on the surface to be more evil than good, by the end of the sixth book the reader is still left questioning Snape's motives and disposition.

Perhaps this is why in February Borders/Waldenbooks offered customers who pre-ordered the final Harry Potter text a choice between two bumper stickers: "Trust Snape" or "Snape is a very bad man." Posters in stores pose the question: "Severus Snape: Friend or Foe?" The moral status of Snape has turned into an extravagant marketing campaign, and helped launch Harry Potter and the Deathly Hallows to the top of bestseller lists months before its publication.
But the mystery of Snape's moral status is more than a clever marketing strategy. In the face of our cultural discourses regarding good and evil, the answer to the Snape question matters deeply. If Snape's story ends as a narrative of redemption -- a narrative pattern that Northwestern University psychologist Dan McAdams believes most Americans seek in the face of the contingency and tragedy of human existence -- it will serve as a reminder that the human condition is marked by moral ambiguity rather than the Manichean flatness of an axis of evil; that goodness and sin exist simultaneously in all of us; and that the post-9/11 American predilection toward regarding evil as utterly transparent is unrealistic in light of the noetic effect of sin. If Snape's story concludes as a narrative of pure evil, it may provide hope that in the end, with much struggle, evil can be defeated by good. But it will fail to reflect the struggle that each individual faces between sin and redemption in this post-Fall world.
The fact that so many people are so profoundly invested in the Snape question also matters deeply. Many of us desperately want Snape to be good not only because we believe that fiction has the power to reflect and to shape reality, but also because we hope on some level that people have the capacity to be better (as well as worse) than they appear; we know that the legacy of sin hanging over us calls for humility in our assessment of what is good and what is evil; and we believe that we will live less dangerously and more ethically if we acknowledge this fact.

Of course, the text has already been written, and Snape's final moral status has been determined once and for all -- it only remains for readers to discover in the early morning hours of July 21st. This reader is hoping that Severus Snape will, in the end, be trustworthy even in the face of his status as a very bad man -- that he will, like all of us, prove to be, as Martin Luther put it, simul iustus et peccator, at once righteous and a sinner.

Dan P. McAdams, The Redemptive Self: Stories Americans Live By (New York: Oxford University Press, 2005).
Links to images of the February Borders marketing campaign may be found at http://blogs.nypost.com/potter/archives/2007/02/snape_--_the_ma.html.

The current shape of the Borders Snape marketing campaign may be seen at http://www.bordersmedia.com/harrypotter/.

Elizabeth Musselman is a PhD candidate in theology at the University of Chicago Divinity School.

Anonymous said…
This is a beautiful analysis of redemption. I've always wondered if God will forgive the worst sinner, if he truly becomes a new person. It is very sad, in my opinion, that JK Rowling did not have Snape becomem a new person in the end of her novel; since she wrote that he only chose to leave the Deatheaters because of Lilly - not because it was the morally right thing to do. After all her "ambiguity" in the first six books, she made him flat after all. I was hoping Snape had left the Deatheaters because he realized how evil they were - not because he was still mooning after a lost love.
4:24 PM