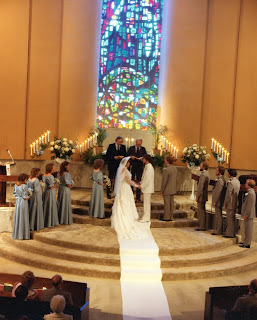 Today is the twenty-ninth anniversary of my marriage to Cheryl.  We were married in a church -- not the church we were attending at the time, but the church I remained an official member.  It's been a great ride -- full of ups and downs, as is true of every marriage.  Our covenant has surely been tested, but by grace we've moved forward.  Since it's our anniversary, I suppose it's fitting that Martin Marty opines on marriage customs as described in the New York Times.  Why is it that even as people seem less inclined to join religious institutions they still seek out the blessing of clergy on their marriages?


-- Martin E. Marty
Picture an archaeologist or anthropologist centuries from now coming across a Sunday New York Times from our times. He or she might wonder what light the relic would throw on tribal customs like marrying in 2012. (We are assuming that marriage will survive, long after newspapers don’t.) The trained scholar would know that through the ages marriage rites and customs revealed much about what people valued and believed. Here is a document that will reveal much! What would those newspaper pages from American civilization’s major metropolis suggest about such rites back in 2012?
Stunned and worn down by an overdose of public religion news in the past fortnight—think of “The God Particle,” The Presidential Campaign, Presbyterians Voting Against Spanking of Children (Presbyterians vote against spanking children, but are sharply split over "divestment" from Israel.), Conflict in Israel over Drafting Haredim, Scientology and on—I took refuge near an air-conditioner and read the Times on July 1 to do my own deducing.
In every case the published marriage stories told who officiated at weddings. Ten officiants were civic (judges etc.), in which cases the rites would have been classified as “secular.” No surprise. The winner among favored clerics were the eleven rabbis, with the cohort of eight Roman Catholic priests coming in second. (One listed as “Old Catholic” is not Roman.) The favor shown Catholicism would have been no surprise, nor would the number of rabbis among New York area influentials. Again, the anthropologist would find that the five Episcopal priest officiants represented the clerical elites who endured here and there nationally. Representing the other faiths that would have dominated in, say, 1812 or 1912 but not in 2012, were a single Presbyterian, a single Lutheran, a single United Methodist. There was not a single Baptist, northern or Southern or, certainly, no African American or Pentecostal picture and write-up could suggest to the scholar centuries from now that nationally the members in this last group were huge presences not unrepresented in greater New York but nowhere that week in the Times.
“Non-Western” populations in the Times are numerous, but only one Buddhist, one Hindu, and one Muslim officially tied the knot in this newspaper’s accounts. What might impress or bewilder the archaeologist in a future time would be the inventions one finds in such columns, home-made one-person “religions” adapted to circumstances. Either these will have prevailed against communions of the religious so that there need be no bewilderment, or they will have faded without a trace, as ephemeral pragmatic phenomena. In the most popular case we read that so and so “became a Universal Life minister for the event.” There was also an “affiliate with CITI ministries” and a “minister affiliated with Rose ministries.”
Ministries such as these are sometimes simply and frankly commercial. But I don’t want to go into critiques of them right now. I’d rather see them as phenomena in a world in which membership at synagogue or church involves commitments many want to avoid, but also a world in which couples cannot completely shed the notion that there is something sacred going on, that some at the ceremony may look for reminiscences of classic rites. I should also add: there’s nothing wrong with just “telling it to the judge” non-religiously. Meanwhile, next week I promise to get back to obvious subjects, and maybe some day to something really big, like the misnamed “God Particle.”
References
For a lightly satirical analysis of which couples merit attention from the New York Times— because of money, power, notoriety, connections, inventiveness, or quirkiness, see Katie Baker’s “Matrimonial Moneyball” from last July 14, 2011.
Martin E. Marty's biography, publications, and contact information can be found at www.memarty.com
.----------


Sightings comes from the Martin Marty Center for the Advanced Study of Religion at the University of Chicago Divinity School.