Did You Get Want you Wanted? -- A Sermon 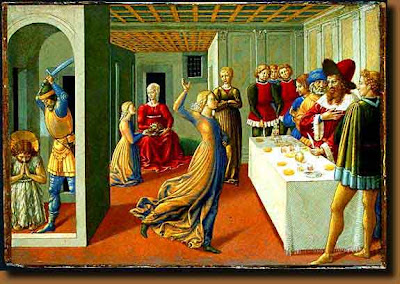 
It’s your birthday and you’re really hoping to get a special present.  It could be a new bike, a red wagon, a doll, a new Ford Fiesta.  You’ve left lots of hints, and you’re hoping that you’ll get your heart’s desire.  So, did you get what you wanted?   Or did you get something else?  And if you got what you wanted, is it what you hoped for?

Herod Antipas was the king in Galilee, which is where Jesus hailed from.  When his birthday approached, he decided to throw himself a party.  You can do that if you’re the king.  As Mel Brooks put it in History of the World, Part 1:  “It’s good to be the king!”  So, Herod sent out to the invitations to all the movers and shakers from the neighborhood and invited them to a big banquet.  His wife, Herodias, who was also married to his brother, offered up her daughter whom tradition names Salome – as the entertainment.

As you might expect, Salome goes and checks in with Herodias, who had a specific plan in mind when she sent out her daughter to dance for the king.  Whether or not Salome wanted the big prize of half the kingdom, her mother wanted the head of John the Baptist on a platter, and that’s what Salome asked for.

Salome is but a pawn in a game of power, and in this game Herodias appears to win.

Although she doesn’t die in either the book or the movie version of The Hunger Games, Katniss Everdeen faces the wrath of those in power when she defies them by refusing to play their power game.

According to Mark, Herod is horrified when Salome makes her request, but since he’d made this promise in front of all his friends, he felt obliged to honor it.  With no other recourse, he ordered his guards to bring the head of John to the party.  I’m not sure that’s the present that either Herod or Salome wanted to receive, but that’s the way things often work, don’t they.   This story about a birthday party that ends with a beheading is part of a larger story, and that story has to do with Jesus and the kingdom he is seeking to inaugurate.  In telling this story we see the contrast between two realms – the heavenly and the earthly.  It’s a story about two kinds of power, the one that’s built on either brute force or manipulation.  Herod derived his power from Rome, but he used brute force and fear to impose his power on the people. Herodias didn’t have that option, but she did know how to use manipulation, which is a more subtle form of power, but it’s often just as effective.

Their understanding of power stands in contrast to the vision offered by both John and Jesus.  They come proclaiming the reign of God.  John’s message is repentance and forgiveness in preparation for the coming of God’s reign.  Jesus builds on this message and proclaims in word and in deed a message of healing and mercy.  There is power in this new realm, but it’s not the power of fear, but rather the power of love.

If we turn to Ephesians, we hear a message of adoption.  We read that God has adopted us as God’s children through Christ, and with adoption comes redemption, forgiveness, and the revelation of the mysteries of God, which entails bringing unity to heaven and earth under the reign of Christ.  (Ephesians 1:3-14)

We’re living through a political season, and the politicians and their allies have a message for us.  Whatever the party, they’re offering us the promise of gifts in return for our loyalty.  They ask us – what do you want?  And they appeal to our self-interest.  But as we all know, they often fail to come through on their promises.  That’s just the way politics work.  And if they give us what we ask for, are we satisfied?

God is a giver of gifts also, and as James puts it:

Every good gift, every perfect gift, comes from above. These gifts come down from the Father, the creator of the heavenly lights, in whose character there is no change at all.  (James 1:17 CEB).

God gives good gifts.  We see them described in 1 Corinthians 12 and Romans 12, but God also expects something of us.

He has told you, human one, what is good and  what the Lord requires from you:
to do justice, embrace faithful love, and walk humbly with your God.(Mic 6:8 CEB)

Did you get what wanted?