The Irony of War -- Thoughts from Antietam 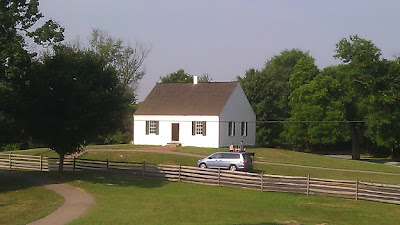 Earlier today my family and I spent a few hours at the Antietam Battlefield, Sharpsburg, MD.  Antietam has the "honor" of being the bloodiest one day battle in American History.  During this one day, between North and South, more than 23,000 soldiers were killed or wounded. 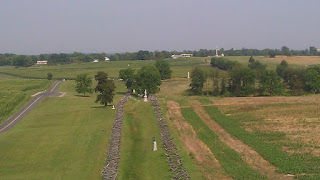 Fought on September 17, 1862, nearly 150 years ago, this battle proved to be an important turning point in the American Civil War.  Though essentially a draw, the Union Army was able to push back Robert E. Lee's Confederate Army.  It did several things.  First it probably saved the Union.  Had the North lost, the Confederate secession may have been permanent (the Brits and French were waiting for one my Confederate victory to recognize them).  It also gave the North the victory they needed so that Abraham Lincoln could issue the Emancipation Proclamation, freeing slaves in all the seceding states.

Yes, this is one of the more important events in American history.  So, why the title?

The small white building in the picture played an important role in the battle.  Both armies used it as a gathering place and as a place of battle.  The irony here is that this building is a Dunkard Church.  The Dunkards were German Anabaptists who were pacifists, and yet their church became a place of war.

I'm not a pacifist, but I seek peace as a priority.   I recognize that this battle has important implications for a great many people, not the least being African Americans held in slavery.  But perhaps this church stands as a reminder of the primacy of Peace.
Email Post
Labels: American History Anabaptists Civil War Emancipation Proclamation peace War