Taxes are the price we pay for a civilized society. 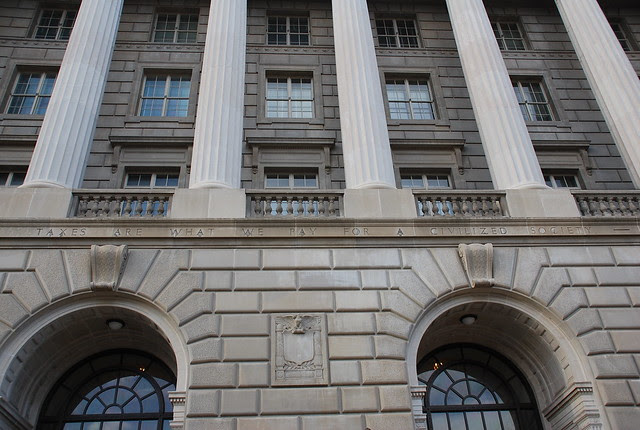 There is a big debate going on about taxes.   The two presidential candidates seem intent on talking about it.  Mr. Romney and Mr. Obama have very different views on the matter, and the recent Supreme Court decision upholding the Health Care Mandate under Congress's taxing power as well as the pending expiration of the so-called "Bush Tax Cuts" have only added to the debate.

There is a view held by some in our country that taxes are a bad thing.  We can talk about fees and penalties, but don't talk about taxes.  But, while we may not enjoy paying taxes, what are we willing to give up so we can pay less in taxes?

The title of this post -- "Taxes are the price we pay for a civilized society" --  is from a speech made by Oliver Wendell Holmes, Jr.  Holmes was the Associate Justice of the Supreme Court when he made that statement.  Earlier in life he survived the Battle of Antietam.  This statement is found above the entrance to the IRS building in Washington DC, which I walked past earlier this week during my time in Washington..

Whether or not we enjoy paying taxes, they appear to be a necessity if we want to have a civilized society.  Government can become too big and overbearing but a government can become too small to be functional.  Trying to "restore" the original vision of small government offered by Jefferson might not be possible.  Hamilton's Federalism is likely more appropriate in an age when people are extremely mobile and the needs of the nation are greater.  In the 1780s the US was a small, newly independent, and rather insignificant nation.   That is no longer true!  Well, that is unless the anti-government folks get their way and we begin to slide toward Third World status.

George Schneider said…
There has been a study about the taxes from the year 1950 up to the year 2007 in relation to the economy's GDP. What I learned is that, the lower the tax is, the lower the GDP as well. Now, I'm wondering how would the citizens of the US accept this fact. irs form 2290
11:42 PM

Ryan Donovan said…
Taxpayers will be unable to avoid issues with the Internal Revenue Service when they abuse tax deductions as a means to lessen their government tax bill. Tax deductions should be proven when the IRS examines your return, and that is true for tax credits, salary sources, etc. Determine what tax deductions are actually for and the way to use them at this website to avoid the irritation of an audit as well as the stress of a tax debt.