Every episode of Star Trek: The Original Series – begins with Captain Kirk narrating the mission statement of the starship Enterprise:

Space, the final frontier. These are the voyages of the starship Enterprise. Its 5-year mission: to explore strange new worlds, to seek out new life and new civilizations, to boldly go where no man has gone before.

When Star Trek: The Next Generation appeared twenty years later, the producers made a few changes to the statement. Instead of five years, the new crew was embarking on a  “continuing mission,” and they replaced the words “no man” with “no one.” But, they still had a mission – to explore strange new worlds, seek out new life and boldly go to new places.

Although we’re not going into space, the church does have a “continuing mission” to “boldly go where no one has gone before.”  The words I want to emphasize here are “continuing” and “boldly.”  Our mission is rooted in a mission that was established by God long before any of us were born.  It is rooted in the call of Abraham and Sarah, in the ministry of Jesus, and in Jesus’ commission to the disciples, that they should go into the world as his witnesses.  Jesus also tells the disciples to wait for the Spirit, who will give them power – that is boldness.

Yes, ours is a continuing mission, but I like the idea of five-year increments.  My sabbatical this fall marked the end of my first five years of ministry at Central Woodward.  On my return, we begin the next five-year mission together.  In the past five years we have explored new worlds, we’ve sought out “new forms of life,” and we’ve even gone boldly into these new adventures in the Spirit.  But, the mission hasn’t ended.  As we look forward into the future, five years at a time, we can expect God to take us to new places and provide us with new opportunities for ministry in this world.  In taking up this call to mission we accept the designation of “evangelical.”

For many today, the word “evangelical” designates a conservative religious party that has particular doctrinal and political beliefs.  While there is truth to this belief, the word also has a much broader meaning.  In fact, in Europe the word evangelical means Protestant.

For my purposes I want to lift up the missional dimension of the word evangelical.  But before I do that I need to acknowledge my own Evangelical roots.  After all, I’m a graduate twice over of a leading Evangelical seminary.  Because my spiritual journey has taken me into the evangelical movement, and because I wanted to focus my sabbatical on touching base with “founding visions,” during our trek to Southern California, Cheryl and I spent several days on the campus of Fuller Theological Seminary.  We had dinner with my mentor and his wife.  I attended a class, met with faculty old and new, and reconnected with this important part of my own journey.  In doing this I want to reclaim that part of my own journey, especially the focus of this movement on mission.

For me, to be an evangelical is to proclaim the good news of Jesus Christ to the world in word and in deed.  The word evangelical comes from a Greek word that is translated as good news.  Surely that is our calling.  We are bearers of good news to the world.  Through our lives and our ministries, the nations are to be blessed.


In Matthew’s Gospel, after his baptism at the Jordan and his time of testing in the wilderness, Jesus retreated to his hometown in Galilee.  Then, after the arrest of John the Baptist, Jesus went down to the Sea of Galilee and began to preach.  Like John he called on the people to repent, to turn around their lives, and give them to God, because the “Kingdom of Heaven has come near.”


As Jesus went around the region preaching, he invited others to join him in his evangelical mission.  He started by inviting four fishermen to leave their nets and the security of their employment and join him in fishing for people.  Matthew tells us that Jesus and his disciples went around Galilee, “preaching the good news of the kingdom and curing every disease and every sickness among the people” (Matthew 4:12-23). That is the evangelical imperative – preach the good news and bring healing to body, soul, and even the community itself. 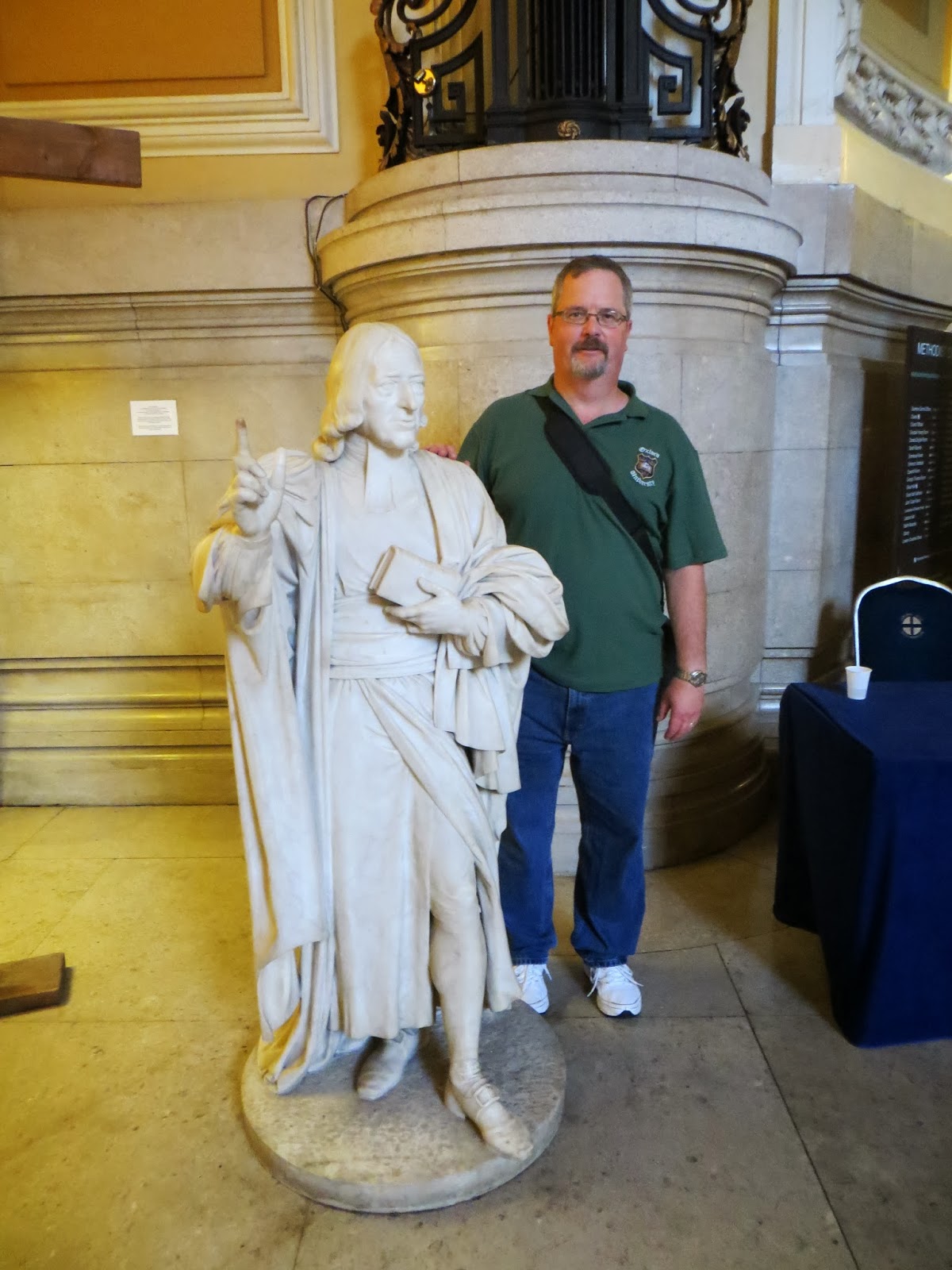 One of the leading exponents of this vision in the eighteenth century was John Wesley, who with his brother Charles, helped found the Methodist Movement.  Methodism was then part of the Evangelical wing of the Church of England.  During my trip to England I had the opportunity to stop in at the Methodist Central Hall in London.  I even had my picture taken with a life-sized statue of Wesley.  I bring up Wesley because he strongly believed that the church is called to reach out beyond its walls to the people.  He caused quite a stir in his day by going out into fields and even public squares and preached to all who would listen.  For Wesley, the church doesn’t engage in mission, it is mission.  Therefore, a church that focuses on maintenance isn’t really the church of Christ.
When I arrived here in 2008, I came to a congregation that was committing itself to being a missional church.  We studied together Martha Grace Reese’s books Unbinding the Gospel: Real Life Evangelism

and Unbinding Your Heart.  These studies helped us reclaim our calling to share our faith with the world.  Then in February of 2009, we gathered for a retreat and came up with a core values statement that set us on this missional course.  So, if we’re to be true to our purpose as a congregation, then we will be a missional church.  And therefore, everything we do should proclaim the good news that the realm of God has come near, which means we’re an evangelical church.
This calling is further defined in Jesus’ final message to his disciples before he departed.  In Acts 1, after the disciples ask him if he’s going to “restore the kingdom to Israel,” he tells them not to worry about such things, instead he gave them a mission.  In verse eight, Jesus tells them that they “will receive power when the Holy Spirit has come upon you; and you will be my witnesses in Jerusalem, in all Judea and Samaria, and to the ends of the earth.”
The Book of Acts is built on this principle.  After the Spirit falls on the church at Pentecost, giving them power and courage, they begin to preach the good news of the kingdom.  They start in Jerusalem, where a church is born.  Before long, the mission takes them to the rest of Judea and then Samaria.  From there the mission extends to the ends of the earth.  Although the Book of Acts ends with Paul in a Roman jail, Luke leaves the story open so that we can continue writing this story.

In the two previous sermons in this series, along with the sermon I preached before I left for the Sabbatical, I linked our continuing mission as a congregation to the covenant God made with Abraham and Sarah. In taking up this calling to be Jesus’ witnesses from Jerusalem to the ends of the earth, we participate in this covenant of blessing.

Bringing Jesus’ commission in Acts 1:8 to the present, I have previously compared Jerusalem to the people living in a five to ten-mile radius from the church, especially the community of Troy.  This is the starting point.  From there we move outward into Metro Detroit and the state of Michigan – our Judea and Samaria.  From there we join in a ministry that takes the good news, the blessings of God, to the ends of the earth.

Wherever it is that God has placed us, we have the opportunity to embrace God’s mission.  In doing this we reclaim our founding vision, and in doing this we become  evangelicals – in the broad sense, not the party sense.

I want to bring this message to a close by sharing the words from a  Charles Wesley hymn.  It’s not one of his more famous hymns, and so you won’t find it in most hymnals.  The words might even sound a bit dated, but I think they capture the evangelical spirit to which we’re called to embrace:


When first sent forth to minister the word,
Say, did we preach ourselves, or Christ the Lord?
Was it our aim disciples to collect,
To raise a party, or to found a sect?
No; but to spread the power of Jesus' name,
Repair the walls of our Jerusalem
Revive the piety of ancient days,
And fill the earth with our Redeemer's praise.

[Quoted in Paul Wesley Chilcote. Recapturing the Wesleys' Vision: An Introduction to the Faith of John and     Charles Wesley,