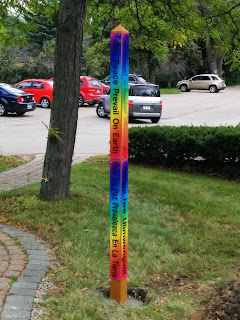 I am trying to stay out of the Donald Trump fray, at least for now, but I have been pondering why he has caught on with so many Americans. To be honest, I've been wondering about the sanity of my fellow citizens. Or perhaps we should wonder what's in the water.  Yesterday, as I was watching the news, I caught a bit of a Trump rally. I can't remember the statement exactly, but Trump essentially defined the movement he leads as one committed to keeping the other from getting my stuff.  That's my loose paraphrase of what I heard.

Trump is a showman, but I don't think he would be leading the polls for so long if he wasn't tapping into something in the American psyche. There is a deep fear that if someone else has something then it comes at my expense. Thus, the anti-immigrant talk.  While I think there is racism in this, there is also this Nativist protectionist element. It's why many vote against their own interests. They forget that if another has insurance, then the same opportunity is open to them. Or consider the protests against the Affordable Care Act, where seniors with Medicare were demanding that the government keep their hands off their insurance, forgetting that Medicare is a government health insurance program. Of course, opponents of the health insurance reform were able to turn seniors against non-seniors.

Political power is often gained and sustained through a divide and conquer method. Colonial powers knew this to be true. The British used this method to control the vast Indian subcontinent. Too often we give into this.  So, we see Donald Trump rising to the top by stoking the fears of white Americans who see their vision of America being undermined by the growing diversity within our midst. In places like California no racial/ethnic group can claim a firm majority of the population. Thus, the European-American (WASP) cultural hegemony that was in place for more than three centuries is no more. But it's not only ethnicity, it's also religion. Even though Christianity remains by far the dominant religion in America, the idea of anti-Christian persecution is rampant, which is expressing itself (in my opinion) in the anti-Muslim backlash we're seeing.

The nation is changing. It is browner, it is religiously more diverse, it is more accepting of differing family configurations. Not everyone is comfortable with this.  That is to be expected. There are aspects of the changing times that make me uncomfortable. But, my prayer is that we would embrace each other, in all our diversity, rather than take the tribalist route.  This is why I wish we would reinstate as our national motto these Latin words: E Pluribus Unum (Out of the many one). Oh, and as we learned in kindergarten -- it's good to share!!