Out of Nowhere -- A Sermon for Advent 4C 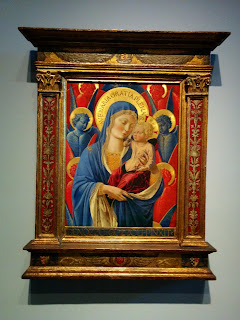 O Little town of Bethlehem, how still we see thee lie!
Above thy deep and dreamless sleep the silent stars go by.
Yet in thy dark streets shineth the everlasting Light;
the hopes and fears of all the years are met in thee tonight.

These words written long ago by Phillips Brooks have long been a favorite of carolers. In our mind’s eye we imagine a small quiet town, where not much is happening. It’s not a place where you would expect something momentous to occur. And yet, the carol declares that the everlasting Light shines in its streets.

As Advent moves quickly toward its culmination in Christmas, we begin to see signs that the Everlasting Light is about to shine. We’ve been preparing these past several weeks for this day, and wait in hopeful expectation for the full revealing of this Light of God.

Although Bethlehem was a small town, it was also the hometown of King David. Therefore, in times of trial even in its smallness Bethlehem served as a beacon of hope.  This was the case when Micah began to preach. The mighty Assyrian army had laid siege to the capital, where David’s descendants now reigned. Micah had been telling the people that they had gotten themselves into this mess because of their wickedness. For several chapters, Micah had been telling the people of Jerusalem that God was using the Assyrians to discipline them. But, then in much the same way as we saw with Zephaniah last week, the mood shifts. Micah still isn’t finished offering words of correction, but for a moment he stops to give them a word of hope.

Micah points toward the little town of Bethlehem. He tells them that a child is about to be born, who will shepherd the people and defend them, even as David had done centuries before. This ruler from God will give them a sense of security and bring universal peace.

You can understand why early Christians wanted to connect Jesus to Bethlehem. They proclaimed that Jesus was the promised child born in Bethlehem, who bring fulfillment to this promise of peace.  We continue to embrace this vision as we celebrate Advent and Christmas – both the hope and the fulfillment.

The phrase “little clans of Judah” caught my eye, as it did for Phillips Brooks. One of the wonders of life is that God doesn’t follow conventional wisdom. God doesn’t choose the powerful and the mighty – such as Assyria or Babylon – to accomplish God’s purposes. No, God chose Israel and Judah. And it was seemingly out of nowhere that David came to power. Remember that he was the youngest child in Jesse’s family. Jesse didn’t even bother to call him home when Samuel went looking for a replacement for Saul. Yet, God called David to be king.  Wonders of wonders!

When Mary went to see Elizabeth, carrying her child, she heard Elizabeth declare: “Blessed are you among women.”  These words lead Mary to sing a song of praise to God. In that song of praise, she asks the question:  Why me? Who am I that God chose me? (Luke 1:39-55). That’s the thing about God. God chooses to work with the most unlikely persons. So, whether Jesus was born in Bethlehem or Nazareth, he was born in a little town of no real economic or political significance. So, while Herod lived in Jerusalem, serving as Caesar’s vassal, God was planting a seed in a small town, so that the true ruler of Israel might be revealed.

As we move toward Christmas and into a new year, I thought we might reflect for a moment on littleness, even as our culture celebrates bigness. We shop in big box stores; flock to big churches, and watch as politics is dominated by big money. All of this may be true, but it’s the little of Bethlehem that produces the ruler who will bring universal peace.

This got me to me to thinking about how God uses what is small in the eyes of the world to do good things. Indeed, I believe God is using us, and we’re a small congregation.

To give one example:  In November the Metro Coalition of Congregations celebrated the good work we’ve done over these past five years. MCC is merging into a new entity called DRIVE, which is a new regional community organizing effort that will combine our efforts in the suburbs with those in the city. While this new entity takes shape, we gathered at Serenity Christian Church one last time as MCC to remember and celebrate the good work we’ve been doing in the broader community. Although we were never a large and powerful group, we became a powerful force for good. We began our work by addressing the foreclosure crisis. Our biggest win was helping persuade MSHDA to get the funds made available to them by the Federal Government out to people in need. We also helped turn a crucial vote that lead to the creation of the Healthy Michigan health insurance plan that benefits low-income working families. We took a lead in confronting the ongoing tragedy of human trafficking. We continue to be at the forefront of the efforts to create a sustainable regional transit system. From the very beginning, Central Woodward has been a major participant in this work. While we never got very big, we have been a persistent voice of hope in our region. Why have we been powerful even though we were small in number?  I believe it is because God has been in this venture.

There is another God-directed and empowered venture, which we helped launch. Last year over Gospel in Action Detroit project that is managed by Rippling Hope did home repair on hundreds of homes in Detroit, along with cleaning up vacant lots and boarding up abandoned homes and businesses. This mission had its origins in a conversation in an elevator in Chicago not long after I arrived in Michigan. You see, I had a conversation with Eugene James about working together in ministry. That conversation led to a partnership between Central Woodward and Northwestern Christian Church. From this beginning we forged a partnership with Motown Mission and then with Rippling Hope. This has led to many blessings for the community and for those who participated in the work.

Neither of these efforts are big and powerful entities. Nevertheless, we’re doing good work. We’re bringing God’s peace to communities hard hit by the ravages of time. We’re bringing hope to those who were afraid that all hope was gone.

Now, Micah’s vision is not yet complete. We still see violence and decay in our midst. Universal peace is not yet achieved. But the promise remains: We who follow Jesus have been called to participate in the unfolding of God’s peace in the world. There is much work to be done, which is why we have heard the call to be a missional congregation. We as a congregation might not be rich and powerful. We may only be a small congregation living in the shadows on a big street in the suburbs. The many thousands of cars that pass by each day, probably never stop to consider what resides on this corner. Nevertheless, God has called us to be a witness to God’s peace. That’s why the Peace Pole that we planted last year is such an important symbol.

If you go out and meditate on the  symbolism of the peace pole, the cross, and the rock, which dominate the circle, perhaps you will be reminded of God’s empowering presence that moves us toward the fulfillment of God’s vision of shalom. The promise of peace has yet to reach fulfillment. But we continue to live in faith that God is true to God’s promises. The one who comes to us from Bethlehem serves as our guide into the future.

O Holy Child of Bethlehem, descend to us we pray.
Cast out our sin, and enter in; be born in us today.
We hear the Christmas angels the great glad tidings tell;
O come to us, abide with us, our God, Emmanuel.