How Odd of God (William Willimon) -- A Review 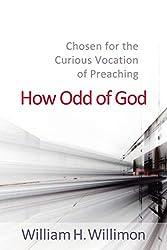 How odd of God to choose human beings, like me, to share the word of God with the world. Or perhaps putting it a bit differently, what makes me think that my words from the pulpit can be a vehicle for God to speak to a congregation? The fact is, the effect of my words on a congregation isn’t in my hands. That doesn’t mean I don’t prepare or work hard at my craft. It simply means that once the words leave my mouth they are no longer mine.

William Willimon ponders this question in conversation Karl Barth, and Barth’s doctrine of election. The book How Odd of God is the published form of Willimon’s 2014 Macleod lectures on Preaching at Princeton Theological Seminary.  Willimon writes in the opening paragraph of the book’s introduction that "election is Gods act whereby our lives are wrenched out of our control and we are commandeered to witness, thereby enabling the joy of talking about something more important than ourselves, our families, or our churches" (p. ix). There is a clear theme throughout the book. Preaching has to do with God and not us. We preach because God chooses to speak through us. That is, it starts with theology not anthropology.

Willimon has long been a prickly voice in the church world. Like his friend and occasional writing partner, Stanley Hauerwas, he seems to like putting his finger in the eye of the current experts on things religious, including preaching. My sense is that many will find this book difficult to digest. While Willimon isn't conservative, like Barth he is intent on calling liberals to account for what he considers their less than reliable message. That is, like Barth, he speaks to the liberal penchant to make Christianity acceptable to the modern culture (the heirs of Schleiermacher and Tillich).

Willimon appeals to the Barthian side of me. There is much in the book that I like. But there is another side to my own theological journey, and that gets stepped on regularly. To get a sense of my dilemma, I find myself caught between Willimon's voice and that of Diana Butler Bass and her new book Grounded: Finding God in the World—A Spiritual Revolution (a book I thoroughly enjoyed). Diana appeals to my sense that faith needs to be "grounded" in our current reality. Diana understands God in distinctly immanent terms. Willimon and Barth on the other hand emphasize transcendence. God is other than the creation. In many ways Willimon's understanding of preaching is out of fashion, and yet it has something to say for itself. For him, and for Barth, belief/theology is important. And this theology doesn't come from the ground up, but from God (on high). While many speak of contextual theology (something I affirm), Willimon doesn't think it works.

So, now you know something of Willimon's direction. He's a Barthian to the core. He embraces Barth's theology of election. He believes that this vision is essential for the kind of preaching that will change lives.

Willimon’s book is comprised of seven chapters that lead us from the “oddness of God” to the homiletical implications of Barth’s doctrine of election. Willimon isn’t concerned about method in this book. He’s interested in the vocation of the preacher. He wants preachers to take hold of their vocation so they can find freedom to witness to the Gospel. He’s concerned that American Christians have come to believe that democracy makes it possible to follow Jesus and not get hurt. We’re spiritual, but not religious, and when we embrace such a message than Christianity becomes non-threatening. In Willimon’s mind that’s not a good thing. Sincerity not intensity is the key marker of this modern Christianity. Thus, Christianity becomes domesticated.

In contrast to this domesticated version of Christianity, Willimon wants to put and uncontrollable God back in control. With Barth he wants our preaching to be Christocentric. He does this by focusing on the doctrine of election as understood by Barth. That is important, because Barth understands election differently from most traditional versions that envision this in individualistic terms. For Barth, God isn’t choosing individuals, as if one person makes it into heaven and another doesn’t. No, God is choosing humanity as a whole in Christ to be in relationship with God. This election isn’t an afterthought; it is eternal. Election is about self-revelation of God in Christ.  Willimon writes that “election is not so much a claim about our future destiny as about the primordial origin of God’s history with us, that dynamic whereby God graciously, from the beginning, unreservedly engages our history and sets in motion our salvation, engaging and saving even to death” (p.29).

It is clear from the beginning of the book that Willimon is interested in theology not preaching technique. Preachers who pick up the book will find in its pages’ challenges to conventional wisdom, but then Barth wasn’t conventional. What preachers will discover is a message about letting God be in control. They will hear that those who are elected to the vocation of preaching, if they are faithful to their calling, will let the Bible control their preaching. Willimon is an advocate of lectionary preaching, and suggests that preaching is first and foremost an exposition of Scripture. This understanding is rooted in Barth’s vision of the three-fold word of God. If Christ is the Word, and Scripture is witness to that word, then preaching becomes the Word when it begins in Scripture and points to Christ as God’s self-revelation.  With this in mind, preachers should be concerned about making their message palatable to the surrounding culture. Here he points to a Kierkegaard statement that the biggest danger to Christianity isn't heresy, but cordiality. Again, this is the problem of liberalism, it domesticates Christianity. In our attempts to make our message relevant we lose the edge present in Scripture.

If we preachers follow Willimon's suggestions then we’re liable to not make as many friends as we would with a more cordial theology. But, our preaching might be more striking and revolutionary. Now, he's not calling for fire and brimstone preaching. He’s not suggesting we become fundamentalists. But he does want us to shift our attention from the therapeutic to the theological. I found his discussion of the apocalyptic dimension in the final chapter all that more intriguing. Liberals and progressives tend to shy away from the apocalyptic. There are good reasons to do so. Much preaching that engages in apocalyptic language is escapist on one hand and downright dangerous in others, creating a binary—us versus them—perspective. What he notes is that many of us who are squeamish about such things tend to be well fed and well educated. We’re satisfied with the status quo. But, he writes:

Preachers who are blessed with congregations of people who have been economically marginalized, educationally disadvantaged, and socially ostracized may have an advantage in this matter of apocalyptic proclamation since their congregations are likely not to place unwarranted faith in merely present arrangements.  (p. 142).

Such congregations want to hear that God is about to act, that God is going to intervene and set things right.

As I said, this will be challenging, even problematic, especially for those of us inhabiting Mainline Protestant churches that are skittish about getting too biblical. While I live on the liberal side of the line political/theological line, I find his critique telling. Perhaps it is because my own academic training is in historical theology that I find this compelling, even as I find it repellent at times. While I’m attracted to the message offered by Marcus Borg and Diana Butler Bass, I find Willimon to be an important counter voice. While I believe that the message needs to be contextualized, lest it become too Euro-centric and male dominated, our contextualization needs to be done in recognition that God's election is universal, that it crosses barriers and boundaries.

Finally, since this is a book about preaching and election, it is actually comforting to remember that the results of my preaching are not in my hands. That doesn't give me an excuse for shoddy sermons that are due to a lack of preparation. Letting God speak doesn’t mean standing in the pulpit hoping God will say something!  It’s good to remember as well that as helpful as method and technique might be, ultimately what matters is God’s Word and our witness to that Word.  Thus, this is an important book for preachers to read, even if at times you want to put it down.
Email Post
Labels: Biblical Preaching Books Diana Butler Bass Election homiletics Karl Barth Lectionary Preaching Revelation of God Reviews Theology William Willimon Word of God