God Has No Grandchildren - Lectionary Reflection for Advent 3C 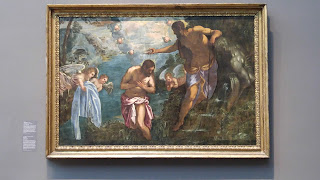 7 John said to the crowds that came out to be baptized by him, “You brood of vipers! Who warned you to flee from the wrath to come? 8 Bear fruits worthy of repentance. Do not begin to say to yourselves, ‘We have Abraham as our ancestor’; for I tell you, God is able from these stones to raise up children to Abraham. 9 Even now the ax is lying at the root of the trees; every tree therefore that does not bear good fruit is cut down and thrown into the fire.”

15 As the people were filled with expectation, and all were questioning in their hearts concerning John, whether he might be the Messiah, 16 John answered all of them by saying, “I baptize you with water; but one who is more powerful than I is coming; I am not worthy to untie the thong of his sandals. He will baptize you with the Holy Spirit and fire. 17 His winnowing fork is in his hand, to clear his threshing floor and to gather the wheat into his granary; but the chaff he will burn with unquenchable fire.”

18 So, with many other exhortations, he proclaimed the good news to the people.

I’m not sure when I first heard the phrase “God has no grandchildren,” but it has a certain resonance here in this passage and in our modern American context. In another apocalyptic moment, we hear John the Baptist challenging his listeners to take stock of their connection with God. Don’t trust your ancestry to get you where you want to go. It is an ongoing challenge to culturally defined religion. His target audience, in Luke’s presentation, are fellow Jews whom he deems to be culturally religious. He tells them that relying on their ancestry is irrelevant. It’s not who your ancestors are, but what you do with that inheritance.

As we emerge out of the age of Christendom, when much of Western society was culturally Christian, it is clear that simply living in American culture doesn’t make one Christian (or religious). It doesn’t matter whether you grew up in church or whether your parents were good Christians. Ancestry or national origin doesn’t make you a Christian.

There has long been a debate between those who insist on conversion and those who believe that faith can be nurtured. Thus, for instance, as revivalism burned over much of the eastern half of the country in the early nineteenth century, Horace Bushnell wrote a famous book called On Christian Nurture. Bushnell argued that a child should grow up never knowing anything other than being Christian. Thus, a child is baptized as an infant, raised in the church, confirmed in the faith, and Christian life continues on. This led to the practice of age-related confirmation classes. I was, for instance, confirmed in the Episcopal Church at the age of twelve. This ceremony was the culmination of our sixth grade Sunday School class. There were no tests or examinations, just some instruction and then the bishop laid hands on us making us full-fledged members of the church. Later on I had a conversion experience and was re-baptized in a creek. It should be noted that even in more baptistic communities, including the Disciples, something similar happens. Instead of a bishop confirming, the young people were baptized after going through a pastor’s class, usually around the age of twelve. For many families that was the end of formal church-going. The kids were safely Christian and now the family could go to brunch instead of church.

John the Baptist is like a revivalist. He challenges the cultural religiosity of his day. He tells the people who are listening not to trust in their ancestry. Just because Abraham and Sarah were their ancestors didn’t mean they could rest on their laurels. After all, God could create children for Abraham and Sarah from the stones. What is needed is a good old fashioned revival. Repent. Change your life-style. Be Baptized as a sign of that repentance and God will forgive your sins. John notes that while he baptized with water, one was coming who would baptize with Holy Spirit and with fire. He was the messenger spoken of in Malachi 3:1-4 who would prepare the way for the one who was to come, the one who would refine the people, even as silver is refined with fire.

There is a strong apocalyptic tone here, one that carries with it a message of divine judgment. This message of judgment that fills so many of the Advent texts may help explain why we like to move quickly through the season. Going through a time of purification is not exciting. I surely don’t relish it. What is interesting is the way the passage ends: “So, with many other exhortations, he proclaimed the good news to the people.” According to Luke the message of John is good news. It’s gospel. The question is how is it good news to us?

As an aside, I should probably note that there is a downside to the end of Christendom. Our churches, as institutions, are struggling to survive. Denominations are in decline. Seminaries are grasping at straws trying to retool for a new reality. Clergy wonder if there will be enough churches that can support them in full-time roles. Once upon a time, people went to church because it was an expected duty. They gave because it was expected. That’s no longer true. Cultural Christianity is in its death throes. But, John comes offering us a message of conversion. Repent, be baptized—first with water, and then with the Holy Spirit and Fire.

As important a prophet as John might be, he was not the one who bring the realm of God into existence. He was the one who prepared the way. Jesus will baptize with Holy Spirit and fire. Ron Allen and Clark Williamson note:

For Luke, the Spirit brings the realm of God to expression after Jesus’ ascension. This passage prompts listeners to recognize that Christian baptism welcomes people into an eschatological community in which (through the Spirit) they live in the power of the divine realm. Repentance is the first step toward becoming a part of this group. [Preaching the Gospels withoutBlaming the Jews, p. 173]

Of course, if we assume that God has no grandchildren, and that each of us has responsibility for our place in the realm of God, we must beware of the tendency in America to emphasize individualism. It is a fine line, but perhaps if we consider the Table as the entry point where all are welcome, then baptism ceases to be the prerequisite to the Table and becomes instead the point at which one owns one’s place in the covenant community and the divine realm. As we do this then we begin to bear the fruit of our repentance. In this there is good news!
Email Post
Labels: Advent Baptism Christendom Clark Williamson Conversion Gospel of Luke Horace Bushnell Malachi Realm of God Reflection Ron Allen